Trevor Lawrence threw for 262 yards and three touchdowns, James Robinson rushed for 100 yards and a TD and the Jacksonville Jaguars snapped an 18-game road losing streak with a decisive 38-10 victory over ailing Justin Herbert and the Los Angeles Chargers on Sunday.

Herbert started after being listed as questionable all week with a rib injury. The third-year quarterback passed for 297 yards but turned it over twice, finishing 25 of 45 with a touchdown. 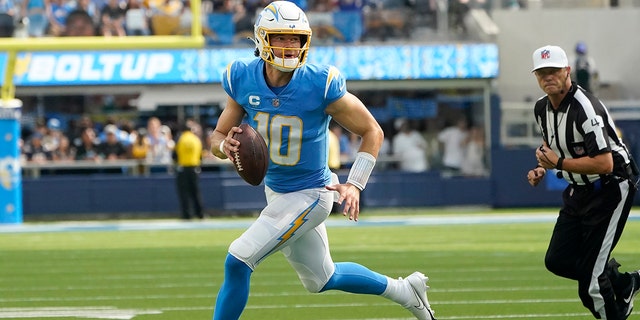 Los Angeles Chargers quarterback Justin Herbert (10) rolls out during the second half of an NFL football game against the Jacksonville Jaguars in Inglewood, Calif., Sunday, Sept. 25, 2022. (AP Photo/Marcio Jose Sanchez)

Jacksonville's road skid was tied for the eighth-longest in league history. The Jags won in the Pacific time zone for the fourth time in 19 trips and beat the Bolts on the road for the first time in six tries.

The Chargers (1-2) had the ball for only 22 minutes and were held to 29 rushing yards. Besides Herbert being at less than full strength, they were missing center Corey Linsley, receiver Keenan Allen and cornerback JC Jackson. Two additional starters — linebacker Joey Bosa and offensive tackle Rashawn Slater — were injured during the game.

The Jaguars led 16-10 early in the third quarter and dominated from there. Robinson provided the knockout punch with a 50-yard TD run off left tackle on fourth-and-1 from the 50. It was the longest TD run of Robinson's career and his second-longest carry overall.

After the Chargers went three-and-out, Lawrence — who completed 28 of 39 passes — directed a 14-play, 60-yard drive that took 8:27 off the clock and was capped by a 4-yard pass to Christian Kirk.

Lawrence completed his second three-TD game in the NFL with an 11-yard connection to Marvin Jones midway through the fourth quarter.

Jacksonville jumped out to a 13-0 lead in the second quarter with 10 points coming off Chargers turnovers. After Patterson was good from 22 yards on the first play of the second quarter, the Jaguars quickly got the ball back when Devin Lloyd picked off a Herbert pass on a deflection and returned it 10 yards to the LA 5-yard line. Jacksonville extended its lead to 6-0 on Patterson's 23-yarder.

The Jaguars found the end zone on their next possession. Five plays after Foyesade Oluokun recovered a fumble by Herbert at the LA 28, Lawrence rolled left and found Zay Jones in the back of the end zone from 14 yards out. 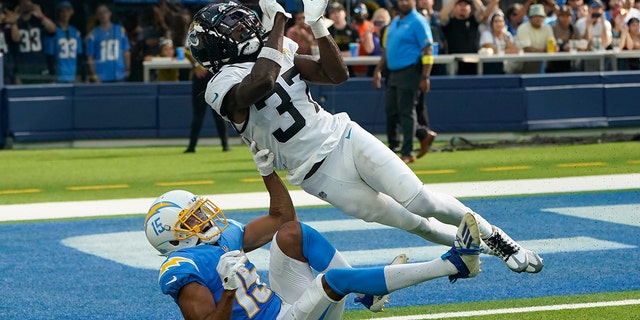 Herbert played despite fractured rib cartilage that he suffered on a hit in the Sept. 15 game at Kansas City.

The third-year quarterback, who made his 35th consecutive regular-season start, was 3 of 7 for 27 yards and had two turnovers on the first four drives before leading the Chargers on their lone touchdown drive midway through the second quarter. Herbert was 7 of 8, for 70 yards on that series, including a 15-yard TD pass to Mike Williams.

Herbert reached 900 completions and 10,000 passing yards in the loss. He is the fastest in league history to reach the completion milestone.

Chargers: Bosa suffered a groin injury during the first quarter and did not return. ... Slater (bicep) went out in the second half.

Jaguars: At Philadelphia (3-0) next Sunday. Doug Pederson coached the Eagles for five seasons and led them to a Super Bowl title in 2017.