"One of the most damaging storms the Northeast has ever experienced," Fox News Senior Meteorologist Janice Dean said on "Fox & Friends First."

New York City's power utility said Tuesday night it saw more outages from Isaias than from any storm except Superstorm Sandy in 2012. 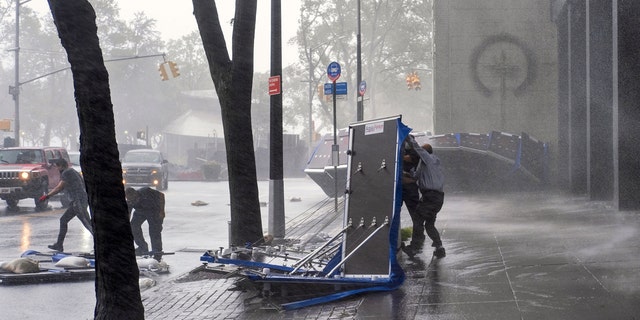 People try to secure barriers meant to block flood waters that were picked up by the wind at a building at Water and State Streets in lower Manhattan Tuesday, Aug 4, 2020, as winds from Tropical Storm Isaias piked them up and tossed them about. (AP Photo/Craig Ruttle)

In Lower Manhattan, barriers meant to block floodwaters were turned into projectiles as the storm's high winds battered the nation's largest city.

Isaias picked them up and tossed them about as the storm moved past, producing strong winds that at times caused damage. 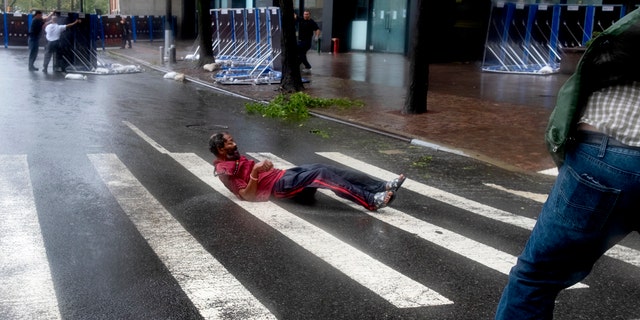 A person lays on a crosswalk after being knocked to the street by wind in lower Manhattan Tuesday, Aug. 4, 2020, as Tropical Storm Isaias produced strong winds as the storm moved past, at times causing damage. (AP Photo/Craig Ruttle)

One person was injured while trying to secure the barriers that ended up strewn on sidewalks and nearby cars, according to a photographer from the Associated Press who was at the scene. 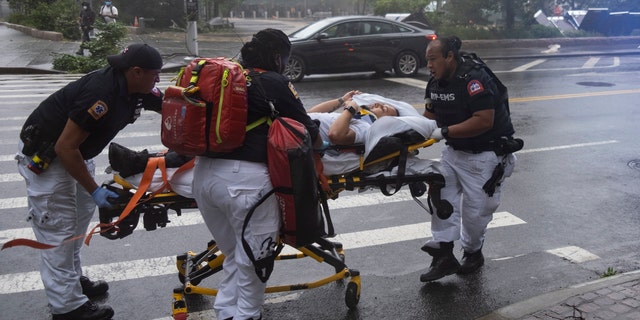 A person who was injured while trying to secure barriers meant to block flood waters at a building at Water and State Streets in lower Manhattan is transported after being injured Tuesday, Aug. 4, 2020, in New York. (AP Photo/Craig Ruttle)

The Aquafence barriers were the same as the ones placed along the waterfront in Brooklyn to protect from storm surge flooding. 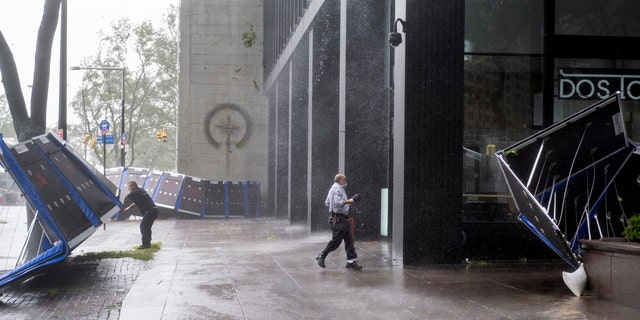 People try to secure barriers meant to block flood waters that were picked up by the wind at a building at Water and State Streets in lower Manhattan Tuesday, Aug 4, 2020. (AP Photo/Craig Ruttle)

Other temporary inflatable flood barriers were installed in New York City to protect against the storm as it approached. They stayed on the ground as opposed to the other ones that got blown over. 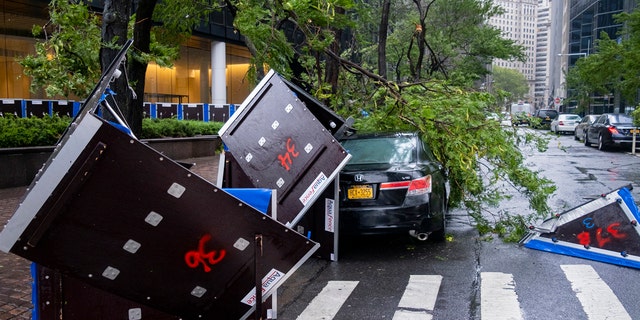 One of the large barriers crashed into the back of a car near the subway stop, shattering the vehicle’s rear window, the New York Post reported.

While the barriers that were blown away did not cause major damage, people still headed out into the streets to try to secure them. 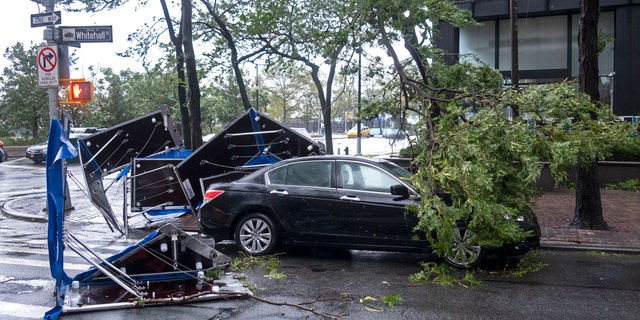 Elsewhere in the city a massive tree fell and crushed a van in the Briarwood section of Queens, killing Mario Siles, a 60-year-old construction contractor who was inside the vehicle, police said. He was among the six people killed in the storm.

The fierce wind and rain from the storm forced the Staten Island ferry and outdoor subway lines to shut down.

Roadways, including the Verrazzano-Narrows Bridge linking Staten Island and Brooklyn, were also closed for several hours.

Fox News' James Rogers and The Associated Press contributed to this report.

Barcelona's Interest in Isak Increased after Koeman's appointment. Larsson has a high opinion of the player (Mundo Seportivo)
Manuel Pellegrini: When you play against Real Madrid and var, it's too much
PSV and Porto are Interested in Barcelona midfielder PUC. He doesn't want to leave the club
Puyol about Barcelona: If we want to win the championship, we need to perform very well
Schalke sacked Wagner. The team has not won the Bundesliga since January
Iacini on 3:4 with Inter: Even a draw would be an unfair result, given how many chances Fiorentina created
Ramos Pro 3:2 with Betis: the Referee tried his best and didn't do anything intentionally
Source https://www.foxnews.com/us/tropical-storm-isaias-nyc-flood-barrier-aquafence-damage-city-streets-lower-manhattan-gust

Andrew Cuomo has gone loco on crime and vaccines

The biggest Giants concerns to emerge from nightmarish day

Ohtani wants to remain 2-way player for Angels in 2021

Xi Jinping and Vladimir Putin are a pair of total liars

Falcons blow another big lead, this time to Foles and Bears

Boy, 9, slashed by another youngster at Crown Heights playground

Face facts, Gov. Cuomo: Your lockdowns cause deaths, too

U.S. Judge Halts Trump's TikTok Ban, Hours Before It Was Set To Start

Corey Lewandowski on Barrett attacks: 'We should see more women' supporting her

Indians rally past Pirates, will host Yankees in playoffs

Trump slams media’s treatment of Barrett’s Catholicism: ‘I thought we settled this’ with JFK