Boris Epshteyn, a campaign adviser to President Trump, announced Wednesday that he has tested positive for the novel coronavirus.

Epshteyn served as strategic adviser to the Trump 2020 Campaign after being an adviser to Trump's 2016 campaign as well.

CORONAVIRUS CASES IN US MAY BE 8 TIMES HIGHER THAN PREVIOUSLY REPORTED, CDC WARNS 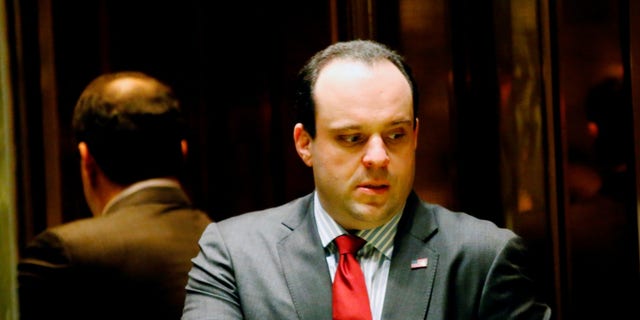 The conference saw members of Trump's legal team allege that the election was fraudulent and that the president won in a "landslide."

MORE THAN 100,000 DEATHS LINKED TO CORONAVIRUS AT LONG-TERM CARE FACILITIES

Giuliani’s son, Andrew Giuliani, who works at the White House, was also in attendance and he announced a day later that he had tested positive.

Trump canceled a planned trip to Gettysburg, Pa., on Wednesday after Epshteyn announced he tested positive. Giuliani still made an appearance at the event, which was organized by Pennsylvania Republicans in Gettysburg, and discussed election issues in the state, reports said.

In addition to his advisory roles, Epshteyn served a brief stint as a White House communications aide and worked for Sinclair Broadcasting, The Hill reported.

The Associated Press contributed to this report

Fenerbahce wants to rent Hazard until the end of the season (Ajanssport)
Bruno scored 1 goal from the penalty spot and did not make an assist in 6 matches with the big six teams in the 2020/21 season
Messi can miss from 4 to 12 games due to disqualification, if his kick in the match with Athletic is recognized as aggression
Clattenburg on the referee of the Liverpool - Manchester United match: He should have waited in the Manet episode, but I wouldn't criticize him
I put Messi on the body and he got angry and slapped me in the face. Obvious aggression. Athletic forward about red Leo
Messi can be disqualified for 2 games. The referee did not indicate that the Barca forward showed aggression by hitting the opponent on the head
Pirlo about 0:2 from Inter: The coach should be the first to take the blame. We were too predictable
Source https://www.foxnews.com/politics/trump-campaign-adviser-boris-epshteyn-tests-positive-for-coronavirus

She Thought the Grizzlies Wanted Hiring Advice. They Wanted Her.

The US has 'screaming level' of Covid-19 transmission, expert says, as country adds nearly 4 million cases this month

Column: Voting against Trump's impeachment could come back to haunt these California Republicans

The Words of Martin Luther King Jr. Reverberate in a Tumultuous Time

Inside Ashley Graham's Journey to Motherhood: From Lots of Sex to Diaper Changes at Staples

Uganda's lesson to other authoritarians: controlling the internet works

‘Rooting hard for you’: Will departure notes end with Trump?

India is the biggest prize in tech. Meet the gatekeeper

Samsung Boss Lee Jae-yong Sent Back to Jail After Retrial

Column: Brady moves on, making history with every throw

Review: ‘MLK/FBI’ is a provocative, yet incomplete chronicle of King vs. Hoover

California man allegedly lived in airport for months because he was afraid to fly: report

Predictions for the Future of 3D Printing

Dramatic drop in Saudi executions after laws changed in 2020

Dr. Dre is back home after being hospitalized in Los Angeles

12 workers trapped week ago in China mine blast are alive

Another postponement in NBA; Fox scores 43 but Kings still fall to Pelicans

Capital Motion Picture Snares ‘The Man on the Other Side’ for North America. U.K. (EXCLUSIVE)

Dante Barksdale Crusaded Against Gun Violence in Baltimore. Then He Was Shot and Killed.

Photos: The Nation's Capital, Quiet And Guarded, Before Inauguration

The Biden era beckons after Trump's lies and insurrection

Stanley Payne on Weaponizing the Past

The Legacy of a Would-Be Dictator

Despite Warnings, Many State Capitols See Only Small Protests And Quiet Streets

Another new coronavirus variant found across California, including L.A. County

Knicks’ Obi Toppin showcases glimpse of what he may become

US team vows to continue after America’s Cup capsize