It was a flicker of hope for Donald Trump in an otherwise dismal summer.

Late last month, the Democratic data firm TargetSmart found that while new voter registrations had plummeted amid the coronavirus pandemic, those who were registering in competitive states tended to be whiter, older and less Democratic than before.

When he saw the numbers, Ben Wessel, executive director of NextGen America, said he "got nervous," and other Democratic-leaning groups felt the same.

The report seemed to confirm what state elections officials and voter registration groups had been seeing in the field for weeks: Neither Democrats nor Republicans had been registering many voters during the pandemic. But Democrats were suffering disproportionately from the slowdown.

Last month in Iowa, where the race between Trump and Joe Biden is surprisingly close, Republicans nosed back ahead of Democrats in active registrations after ceding the lead to Democrats for the first time in years.

“In some states, before the pandemic, you were seeing a net edge for Democrats,” said Page Gardner, founder and president of the Voter Participation Center, which works to register young people, people of color and unmarried women.

Now, she said, “in some states … the advantage has shrunk substantially.”

For months last year and in early 2020, Democrats had been registering voters at a faster clip than Republicans in many competitive states that register by party, including Iowa, Florida, Maine, New Hampshire, Arizona and Nevada. That was in part a function of the Democratic Party’s competitive presidential primary, and in part a reflection of animosity toward Trump. 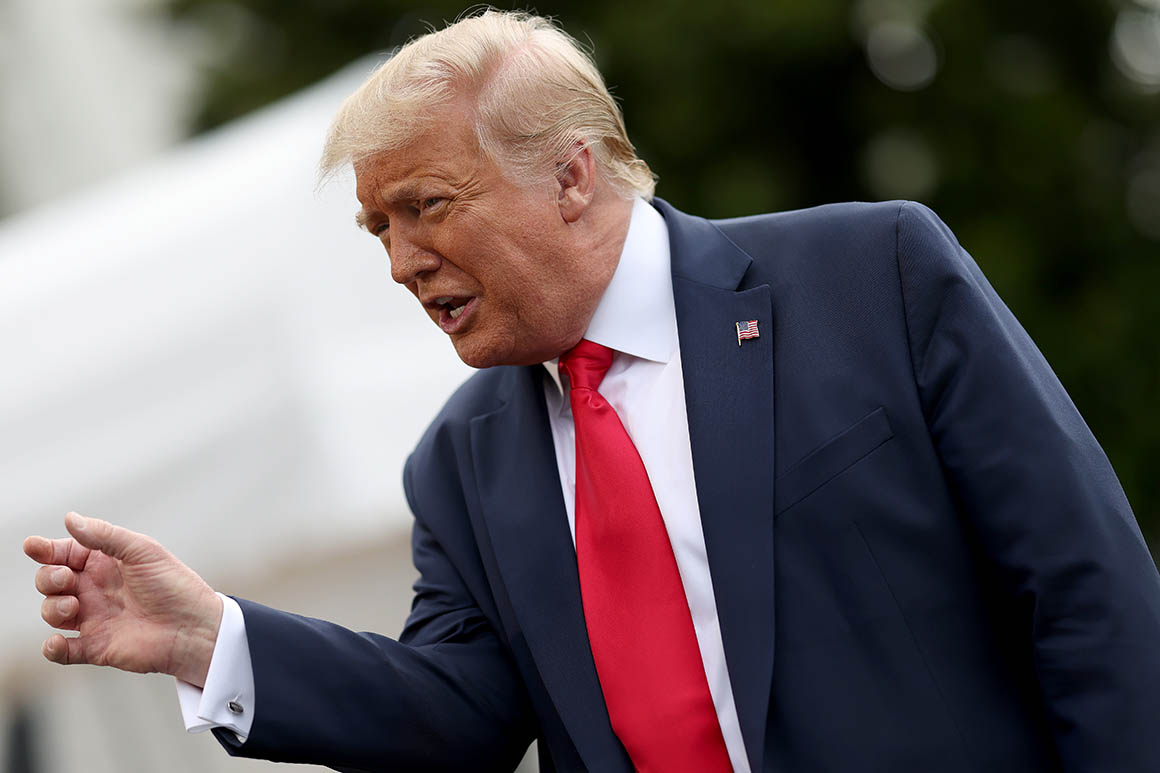 But the effect of the pandemic on voter registrations was severe. Department of moter vehicles closures, stay-at-home orders and restrictions on large gatherings limited opportunities for new registrations. In a report on the decline last month, the nonpartisan Center for Election Innovation & Research concluded that “the steep decline in new registrations may prove to be a sizable obstacle to what was set, pre-pandemic, to be a record election for turnout.”

In-person registrations ground nearly to a halt as people stopped congregating and college campuses closed. For people of color and other marginalized communities disproportionately affected by the pandemic, Gardner said, it was a “perfect, horrible storm in terms of undercutting registration efforts, and undercutting people’s ability to get registered.”

The study from TargetSmart was especially alarming for Democrats because it spotlighted not only falling registrations, but which party was damaged most in battleground states. In a majority of 10 states TargetSmart studied, registrations skewed older and whiter than before the pandemic. And in the states included in the study that register by party — Florida, Colorado, Maine, North Carolina and Pennsylvania — Democrats made up a smaller share of new registrants than before.

Before the coronavirus, said Tori Taylor, co-executive director of the grassroots Democratic group Swing Left, “we were seeing spikes in voter registration that really pointed to a strong spring and summer.”

But by March, she said, “We really felt the decline across the country.”

Because overall registration numbers have been so low across the board during the pandemic, Republican gains during that period have been too small in most cases to make up for months of pre-pandemic Democratic advances. Tom Bonier, TargetSmart's CEO, compared the registration shift to a footrace that was suddenly forced into slow motion. During that time, Republicans, though still behind, “got a couple of extra steps” closer to Democrats.

“It’s not like they’ve built the lead,” Bonier said. “It’s really something where neither side should be celebrating or panicking about.” 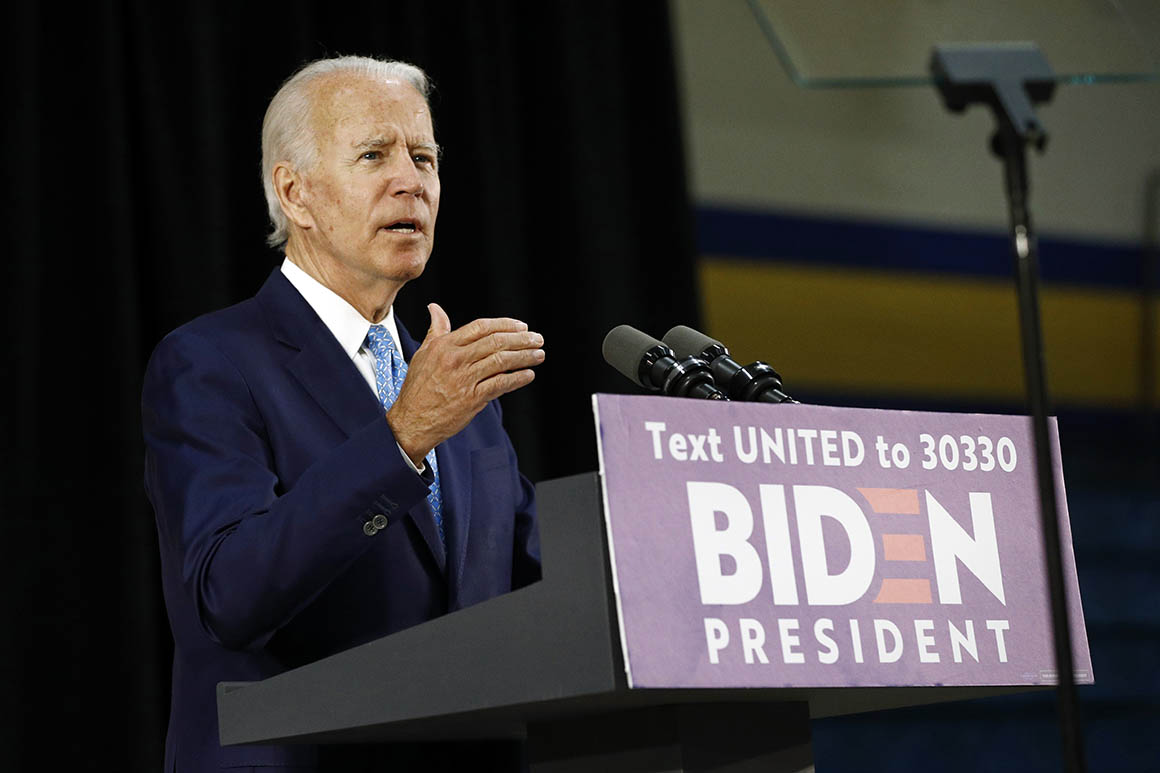 But the monthslong lull in registration, at a minimum, has added an additional measure of uncertainty to the fall campaign, muddying the likely composition of the electorate. In some areas of the country, a swing of even several hundred voters could tilt the registration balance on Election Day.

“We talk about [registration] at every meeting,” said Sarah Mahler, chairwoman of the Democratic Party in Nevada’s Washoe County, a swing county where Democrats outnumber Republicans by just over 100 voters.

Republicans, she said, “are watching the same numbers that we are.”

Democrats widely expect registrations to pick up before Election Day, and they have reason for optimism. Democrats have opened advantages in vote-by-mail, Trump's support has been eroding across the battlegrounds, and many young people appear activated after Floyd's death and eager to engage in the election. In addition, some Democrats expect registrations may be slightly higher than reported because the coronavirus has also slowed the process of adding new voters to the rolls.

Wessel, of NextGen America, said his group downgraded its voter registration projections for the year after the coronavirus hit.

“People like us can’t be out in the street with clipboards the way that we normally would be, and also DMVs are closed,” he said. “There’s a natural clip of this that happens when the economy functions normally that’s not happening now.”

But Wessel’s group and others have begun working in other ways to reach potential voters. With organizers unable to register young voters at many college campuses and other gathering places, they are reporting higher rates of return on direct mail appeals than in previous years. And NextGen is recruiting influencers on social media in college towns to include registration messages in their Instagram, Snapchat and YouTube channels.

“I don’t want to sugarcoat the situation,” Wessel said. “We have work to do. But young people … while they’re not able to register the same way they normally are, I think they’re expressing how excited they are about politics and what’s going on in other ways.”

He said, “People don’t go into the streets and protest if they don’t want to have their voices heard … I think they’ll register and vote.”

Republicans point to their improved standing in registration compared to 2016 in Florida, North Carolina and Pennsylvania — all states Trump won that year despite Democrats holding a wider registration advantage than they do now. And Trump still has a financial and organizational advantage over Biden that could help with a registration sprint in the fall.

Your guide to the permanent campaign — weekday mornings, in your inbox.

But in some ways, Republicans have just as much — if not more — reason to worry about voter registration. This was the year Republicans finally fell behind not only Democrats, but independent voters in registration in the 32 states and the District of Columbia that register voters by party, according to Ballot Access News, which tracks registrations.

Trump is polling far behind Biden nationally and in most swing states. And if he has any chance of catching the presumptive Democratic nominee, it will likely hinge on registering and turning out more white, noncollege-educated voters, a key part of his base.

But the coronavirus has disrupted Republicans’ registration efforts as well, by depriving Trump until recently of the massive campaign rallies that Republicans have relied on as a source of new registrants.

Rob Stutzman, a Republican political strategist who has long been critical of Trump, said it is possible that there are more base voters for Trump "who are going to come up through the floorboards” and register this year.

But “if they don’t have them registered by now, I’m skeptical that they exist," he said.

Another prominent Republican strategist involved in voter registration efforts described the Republican Party’s work in the area as lagging behind. The TargetSmart report, the person said, suggested that Republicans had an opening they failed to fully exploit.

Arthur plans to attend the Barcelona-Napoli match in the Champions League
Vinicius is upset that he doesn't play enough in Real life. PSG are actively monitoring the player
We are used to Juventus having a lot of problems under Sarri. But let's also note the powerful decisions of Rudi Garcia
Juventus can appoint Pochettino as head coach if Guardiola refuses (The Telegraph)
Lothar Matteus: Lewandowski is the best player in the world, not just the best forward
Coutinho asked Barca not to tell him anything about the negotiations while the Champions League is underway
Douglas Costa, Gian and Mandzukic liked the Juventus post about Sarri's retirement
Source https://www.politico.com/news/2020/07/11/trump-voter-registration-355152

How I scored a big laugh from the great Pete Hamill

Lions look to develop Golladay into NFL's top-tier of receivers

Failure wasn't an option on coronavirus aid. It was the only option.

Bodies of 8 Military Recovered After Vehicle Sinks During Training

Biden edges closer to VP pick: Here's who's up and who's down

The Latest: Moving day at the PGA Championship

Over 250 quarantined in Georgia district after first week of school

Big Ten football teams to practice without pads due to pandemic

TikTok To Sue Trump Administration Over Ban, As Soon As Tuesday

A Memphis woman, barely recovering from COVID-19, was evicted from her home

More than 300K in NYC area still without power after Isaias

Why millennials’ distaste for Baby Boomers is justified

Biden quips to Fox News he decided on VP, campaign says it's a joke

'I never felt like that before:' Tigers prospect Skubal on mend after COVID battle

After clashing with Trump over pandemic response, Maryland's Hogan now under fire for his own state leadership

What not to do in a bear attack? Push your slower friends down in attempts of saving yourself, says the National Park Service

Dark dystopian shows are out as Americans binge on comfort TV

Hina Khan 'felt like a baby' working in 'Naagin 5'

Detroit Pistons among NBA's Delete Eight outside of bubble, losing ground for next season

How To Watch Clippers Vs. Trail Blazers Live Online

America’s Military Should Confront Its Past, Not Bury It

Tear gas, clashes in Beirut amid fury over massive blast

Will abide by what SC rules on Sushant probe, says Maha govt

How the pandemic may be widening the gender pay gap

Instacart went on a hiring spree. These workers got squeezed

After Beirut Explosion, Protests Erupt as Lebanon's Anger Boils Over

At Least 18 Dead, 150 Hurt After Plane Skids Off Runway In India

'I don't know. Who knows?': Chinese golfer baffled by question about Trump

Pakistan in control with England 167-5 at tea chasing 277