John J. Sullivan on "The Takeout"

The Biden administration is accusing Russia of moving to provide advanced military assistance to Iran, including air defense systems, helicopters and fighter jets, part of deepening cooperation between the two nations as Tehran provides drones to support Vladimir Putin's invasion of Ukraine.

White House National Security Council spokesman John Kirby on Friday cited U.S. intelligence assessments for the allegations, saying Russia was offering Iran "an unprecedented level of military and technical support that is transforming their relationship into a full-fledged defense partnership."

Kirby said Russia and Iran were considering standing up a drone assembly line in Russia for the Ukraine conflict, while Russia was training Iranian pilots on the Sukhoi Su-35 fighter and Iran could receive deliveries of the plane within the year.

The U.S. allegations are part of a deliberate effort by the U.S. to drive global isolation of Russia, in this case targeted at Arab nations who have looked to contain Iran's regional malevolence and who have not taken a strong stance against Russia's invasion of Ukraine.

As Russia's military resources are being taxed by the Ukraine invasion and sanctions against it because of the war, Western powers are providing military equipment to Ukraine to defend itself, upping the cost to Putin, reminiscent of the draining of resources which occurred during the "Star Wars" competition between the U.S. and the former Soviet Union, when Moscow saw its military coffers depleted. 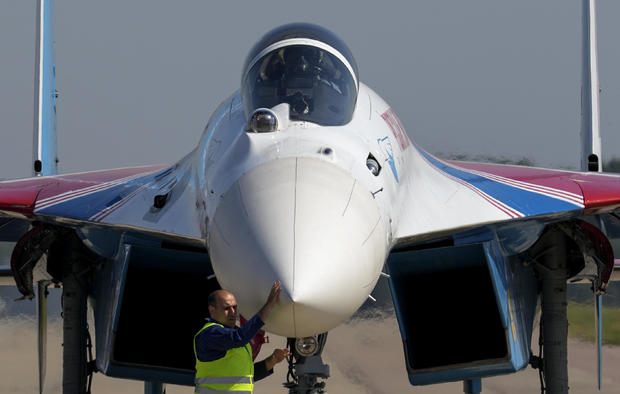 Earlier this year, the Biden administration accused Saudi Arabia of siding with Russia in the conflict by shepherding cuts by the OPEC+ cartel to boost the price of oil, crucial to funding Moscow's war effort. Saudi Arabia and Iran have been on opposite sides of a yearslong proxy war in Yemen.

Kirby said the arms transfers were in violation of United Nations Security Council resolutions, and that the U.S. would be "using the tools at our disposal to expose and disrupt these activities."

Concerns about the "deepening and a burgeoning defense partnership" between Russia and Iran come as the Biden administration has repeatedly accused Iran of assisting Russia with its invasion of Ukraine.

The administration says Iran sold hundreds of attack drones to Russian over the summer. Kirby on Friday reiterated the administration's belief that Iran is considering the sale of hundreds of ballistic missiles to Russia, but acknowledged that the U.S. doesn't have "perfect visibility into Iranian thinking on why" the deal hasn't been consummated.

Russia – because of the biting sanctions – is turning to Iran for weapons, including military drones, that are being using to kill civilians, Britain's U.N. ambassador, Barbara Woodward, told the U.N. Security Council Friday. Woodward called for a U.N. investigation, arguing that both countries are breaking international law with the rogue partnership.

Woodward accused Russia of attempting to obtain more weapons from Iran, including hundreds of ballistic missiles, in return for "an unprecedented level of military and technical support" to Tehran.

"We are concerned that Russia intends to provide Iran with more advanced military components, which will allow Iran to strengthen their weapons capability," she said. "So it is imperative that the truth about Iran's supply to Russia is exposed, and is investigated by the U.N. as soon as possible."

"Ukraine demands that Iran immediately cease the shipments of weapons to Russia that are used to kill civilians and destroy critical infrastructure, and comply with Security Council resolutions," Sergiy Kyslytsya, Ukrainian ambassador to the U.N., told CBS News Friday.

"The military industrial complex in Russia can work perfectly fine and doesn't need anyone's assistance, whereas the Ukrainian military industry does not basically exist and is being assisted by the Western industry and Western companies," he said.

In response to the meeting, Richard Mills, U.S. deputy ambassador to the U.N., told fellow diplomats Friday that "what we are seeing is – frustrated on the battlefield, Russia has resorted to destroying Ukraine's critical and energy infrastructure from afar, causing immense suffering to civilians as we heard just three days ago, and defying the international community's call to end its aggression."

"It is Russia that has cynically called for this meeting, alleging an illicit conspiracy of weapons transfers from Ukraine. When in fact, as others around this table have noted, it is Russia that is complicit in Iran's illegal transfer of unmanned aerial vehicles to Russia," Mills added.

The White House says Russia has also turned to North Korea for artillery as the nine-month war grinds on. North Korea has denied the claim.

The White House has repeatedly sought to spotlight Russia's reliance on Iran and North Korea, another broadly isolated nation on the international stage, for support as it prosecutes its war against Ukraine.

"Iran is now one of Russia's top military backers," he said. "Their sordid deals have seen the Iranian regime send hundreds of drones to Moscow, which have been used to attack Ukraine's critical infrastructure and kill civilians.

"In return, Russia is offering military and technical support to the Iranian regime, which will increase the risk it poses to our partners in the Middle East and to international security."

The Biden administration recently unveiled sanctions against Iranian firms and entities involved in the transfer of Iranian drones to Russia for use in Ukraine. It all comes as the administration has condemned the Islamic republic's violent squelching of protests that erupted throughout Iran after the September death of 22-year-old Mahsa Amini while she was held by the morality police.

Even as the White House has accused Iran of backing Russia's war effort, the administration has not abandoned the possibility of reviving the 2015 Iran nuclear deal — scuttled by the Trump administration in 2018. The pact, known as the Joint Comprehensive Plan of Action or JCPOA, would provide Tehran with billions in sanctions relief in exchange for the country agreeing to roll back its nuclear program to the limits set by the 2015 deal.