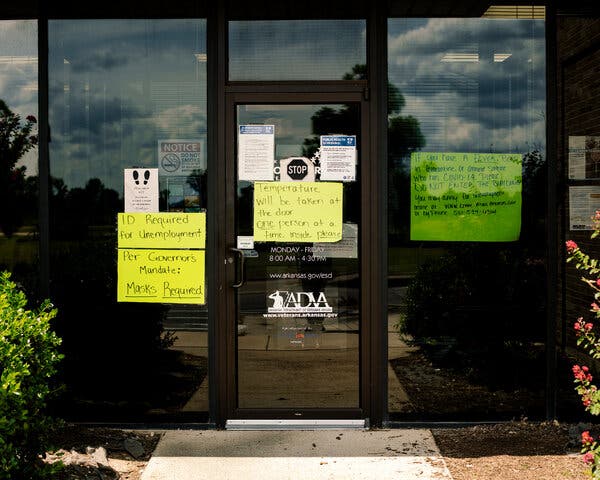 An unemployment office in Forrest City, Ark. Adapting state computer systems to incorporate federal supplements to jobless pay has been a challenge.Credit...Houston Cofield for The New York Times

The federal aid to unemployed workers that President Trump announced last weekend looks likely to be smaller than initially suggested — and it remains unclear when the money will start flowing, how long it will last or how many workers will benefit.

Mr. Trump said Saturday that he was taking executive action to provide unemployed workers with $400 a week in extra payments, with states picking up one-quarter of the cost. He did so after talks on a new round of pandemic relief stalled in Congress.

States are scrambling to figure out how to carry out the plan. Here’s what we know so far:

The benefit will be $300 for most workers, not $400. Rather than adding $100 a week on top of existing unemployment benefits, states can count existing benefits toward their share.

It could take weeks for the money to start flowing. States will need to adjust their processing systems to the new provisions when they are already overwhelmed by unemployment filings.

The money won’t last long. Mr. Trump’s executive action caps spending on the program at $44 billion, enough to cover five or six weeks of benefits, assuming all states sign up.

Workers are left in limbo. For unemployed workers, the uncertainty hangs over mounting credit card debts and looming rent payments. And those who collect less than $100 a week in state jobless benefits do not qualify for the new supplement. 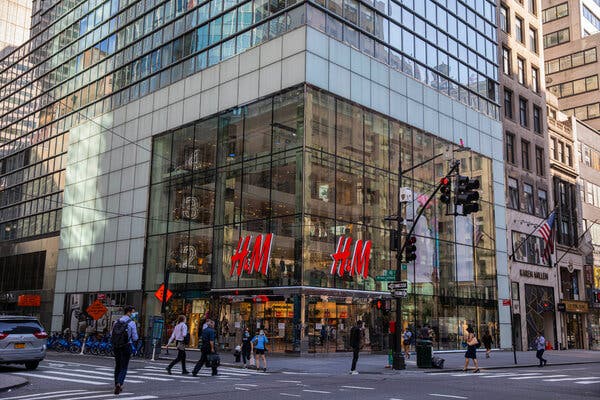 Some of the recovery has been helped by the $600 a week in unemployment assistance, which expired at the end of July.Credit...Hiroko Masuike/The New York Times

The U.S. retail sales figures for July will be released on Friday morning by the Commerce Department. After months of precipitous drops, the numbers bounced back the past two months and analysts are predicting that sales rose again, though not at the rate they did in May or June.

With the coronavirus still keeping some stores closed and many people home around the country, online sales have been a driving force. Some of the recovery has been helped by the $600 a week in unemployment assistance, which expired at the end of July. If Congress fails to extend the emergency benefit, it could derail the retail rebound in coming months.

And there are certain sectors of the industry that may never truly return until a vaccine is approved and widely distributed, allowing people to shop and dine indoors again without fear.

Foot traffic to brick-and-mortar stores selling primarily discretionary goods, including apparel retailers, remains down by as much as 43 percent from last year, according to Morgan Stanley’s research. 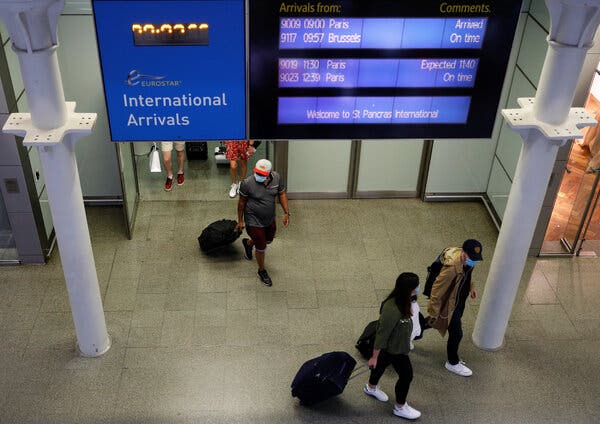 Passengers arriving from Paris at Eurostar terminal at St Pancras station in London on Friday.Credit...Peter Nicholls/Reuters

European shares slumped on Friday, as new quarantine rules for people arriving in Britain raised fresh worries about efforts to control the pandemic.

The Euro Stoxx 600 benchmark index was 1.7 percent lower in late morning trading. Earlier in Asia, Chinese indexes had a good day, propelled by some positive economic data. On Wall Street, futures pointed to a lower open later in the day.

Oil futures were trading about 1 percent lower, and U.S. 10-year Treasuries were rising in price as investors looked for a safe haven.

Britain on Friday announced that people arriving from France, the Netherlands and Malta would need to self-isolate for 14 days, following a rise in coronavirus cases in those countries. The new rules threw a wrench into many vacation plans, and called into doubt efforts to relax lockdowns. Travel businesses felt an immediate impact, including airlines (EasyJet shares fell 7 percent, and the parent company of British Airways fell more than 6 percent) and tour operators (TUI tumbled more than 5 percent).

Underscoring the concerns, France on Friday declared Paris and the Marseille region to be high-risk zones, granting local authorities powers to impose new restrictions aimed at containing the spread of the coronavirus.

In the United States, investors were awaiting data on retail sales for July. Consumer spending is a primary driver in the American economy, and it was flattened earlier in the spring. Spending was revived in May and June as businesses reopened, and the July figures are expected to show another increase, although the rise expected to be less robust because some states and cities tightened shutdown rules again as the virus flared.

In China, economic data showed industrial output rose nearly 5 percent in July from a year earlier, while retail sales slumped 1.1 percent over the same period. It was a further sign that while China’s factories are humming, its residents are holding back from making purchases.

A Lebanese football player has died after being shot in the head. It was held near the funeral where shots were fired in the air
Arteta on Barca and Inter's Interest in Aubameyang: Arsenal are as big a club as they are
Aguero may miss another 1-2 months due to injury
Liverpool will buy Jota for 41 million pounds. Wolverhampton will pay up to 13.5 million for Hoover
8 is Bavaria's favorite number. Now she beat Schalke: Gnabry scored a hat-trick, Sane scored 1+2, Lewandowski came up with an assist by rabona
Liverpool agreed a 5-year contract with Jota. The transfer amount could be 43 million euros
I left everything and went to the other side of the world for my favorite team. The heartwarming story of a Norwegian fan in love with Santos
Source https://www.nytimes.com/live/2020/08/14/business/stock-market-today-coronavirus

She lost her business due to coronavirus. Now she's supporting her four children by running their lemonade stand

Golden Tate’s potential return may give boost to Giants’ offense

Bryson DeChambeau not about to dial it back for Winged Foot

Reaction to the Death of US Supreme Court Justice Ginsburg

When these parents couldn't find children's books with strong Black characters, they created a pop-up store to sell them

The new ethics of Covid: Holding each other accountable for risky behavior saves lives

Fantasy football: Take a look at these under-the-radar receivers

Even without hostile NY crowds, this US Open is tough enough

Lakers take 1-0 lead into game 2 against the Nuggets

In These N.H.L. Playoffs, Backup Goalies Have Taken Center Stage

Here's How These Bachelor Winners Found Love After the Final Rose

Trump may announce a nominee to succeed Ruth Bader Ginsburg in days: report

MS Dhoni vs Rohit Sharma: The massive difference in their net worth will shock you

'She has run away from the community': Trump's son questions Kamala Harris' ties to Indian-Americans

McConnell vows to vote on Supreme Court nominee four years after blocking one.

Dissents were Ginsburg’s most memorable work on the Supreme Court.

Stopgap bill to prevent shutdown held up over farm funding

Shweta Tripathi: No one is forcefully putting drugs in our mouths!

RBG's iconic quotes on law, love and the fight for equality

Anguish, Fear, and a Tiny Bit of Hope at the Vigil for RBG on the Supreme Court Steps

Democrats shatter the ActBlue site’s donation records in the hours after Ginsburg’s death.

Most recent US elections have had an international event as the October Surprise. This one may be no different

Will an international event be the 2020 US election's October Surprise?

After a farmer suffered a heart attack, his neighbors banded together to harvest his crops

McConnell Pursues Scorched-Earth Tactics on Ground That is Already Scorched

How Ginsburg’s death could reshape the presidential campaign

Can Mitch McConnell Be Stopped?

What Ruth Bader Ginsburg Would Want America to Do Now

Senators appear to change stances on confirming successor to Ginsburg vs. Scalia, but argue 2020 is different

AOC says Ginsburg's death should 'radicalize' Dems: 'I need you to be ready'