The University of Texas on Monday said it is taking a series of actions to make its Black students feel more welcome on campus, but stopped short of shelving “The Eyes of Texas,” a song sung at most organized campus events that many athletes have called for getting rid of because of its racist origins.

Jay Hartzell, the interim president of the university's flagship campus in Austin, said the song will continue to be the Longhorns' alma mater.

"Aspects of its origin, whether previously widely known or unknown, have created a rift in how the song is understood and celebrated, and that must be fixed," he said. "It is my belief that we can effectively reclaim and redefine what this song stands for by first owning and acknowledging its history in a way that is open and transparent."

"The Eyes of Texas" has long been criticized for its connection to minstrel shows with characters in blackface in the early 1900s. Players in all sports gathered as a team often sing it after every game. 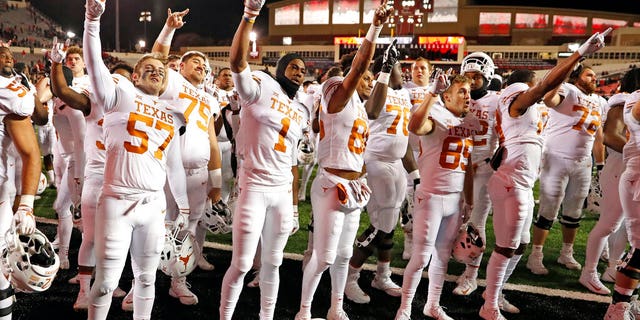 An unsigned letter posted on social media last month said Texas athletes would not help the school recruit prospects at alumni events as they typically do unless the school replaced the song, among other steps.

Texas defensive back Caden Sterns said though he will not sing the song, he appreciates the conversation about it.

Texas linebacker DeMarvion Overshown, who previously posted on social media that he would boycott all team activities until the concerns were addressed, retweeted the University's statement on Monday with the message " We Are One."

"So very proud of our players, all Texas student-athletes, our entire student population and university leadership," Herman said in a tweet. "They will forever be known for being responsible for tangible, positive change on our great campus. Today is a great first step."

The school also will erect a statue for Julius Whittier, the Longhorns' first Black football letterman, at Memorial Stadium, after athletes demanded that part of the football stadium be named for Whittier. Texas will also strip the name of segregationist Robert L. Moore from a building and find ways to honor Heman Sweatt, whose 1950 court case cleared the way for Black students to attend the school.

Many institutions have moved to strip the names of historical figures associated with slavery and racism in the wake of George Floyd's death in the custody of Minneapolis police officers.

Dybala became the MVP of Serie A-2019/20, Immobile-the best forward
Real Madrid: Casillas will always be a Real Madrid player. The best goalkeeper in the history of Spain
In Spain, complete chaos: Espanyol refuses to fly out of La Liga, Depor and all the others - from Segunda
Ferran Torres passed a medical before transferring to Manchester City and signed a contract until 2025 (Fabrizio Romano)
Emmanuel Adebayor: Mourinho is the best coach in the history of football
Casillas announced his retirement
De Gea has found a double-the coach of Scottish Ross County. In his team, 19% of the players are called Ross – even all the goalkeepers
Source https://www.foxnews.com/us/university-eyes-of-texas-remain-school-song-black-athletes

Kanye West withdraws petition to get on NJ's 2020 ballot

Review: A sweet fable in Seth Rogen’s ‘An American Pickle’

Packers' Aaron Rodgers on 2020 and beyond: 'I don't know what the future holds'

In the dazzling Harrow the Ninth, the lesbian necromancers are back in space

Massachusetts court will no longer use ‘grandfathering’ due to ‘racist origins’

How to Create Content Built for the Future of Social Media

Tucker Carlson: In Biden's hunt for a VP Susan Rice takes the lead – and she's a threat

Paul McCartney said backlash he received for The Beatles breakup was 'hurtful': 'I almost blamed myself'

Ford, Struggling in a Changing Industry, Replaces Its C.E.O.

Iran Abducted California-Based Man Staying in Dubai, According to His Family

As the Filibuster Goes, So Goes the GOP

Who is the New Chef on ‘Below Deck Med’ After Kiko’s Exit?

Trump on If He Finds Late Rep. John Lewis ‘Impressive’: ‘I Can’t Say’

Tornado watch issued for major US Metros; what it means, safety practices & more

Trump Dismisses Stat on US COVID-19 Death Toll Per Capita: ‘You Can’t Do That’

Trump says he may suspend evictions with executive order

In Praise of the Zoom Funeral

Dog looks like Batman in striking photo: 'It was just for a split second'

Is Ellen DeGeneres done with her talk show? Why that's not likely, at least not now

Who is Shashidhar Jagdishan, HDFC Bank's next CEO

2020 Flu Shot Strategy: Get Yours Early In The Season

Child care has been safe during the pandemic. That could be a good sign for schools

10 Steps to Achieve a Growth Mindset in Business

A $60,000 Budget Might Be a Deal-Breaker for This Difficult Client on Backyard Envy

It’s Meghan Markle’s Birthday And The Whole Royal Family Is Wishing Her A Happy One!

The most beloved beds on Wayfair under $700