UP CM Yogi Adityanath meets Akshay Kumar in Mumbai; here's what they discussed

On Tuesday, actor Akshay Kumar met Uttar Pradesh chief minister Yogi Adityanath in Mumbai's Trident hotel. A picture of the actor, deep in conversation with the UP CM, is making the rounds on social media. 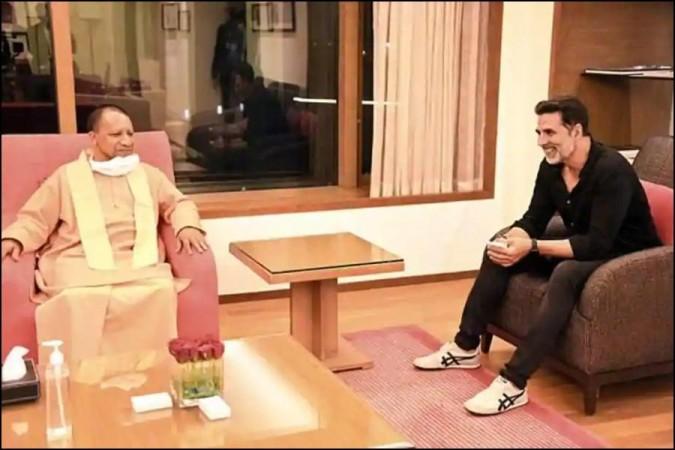 As per various reports in media, Bollywood superstar Akshay Kumar on Tuesday met Uttar Pradesh Chief Minister Yogi Adityanath during his visit to the city and discussed his upcoming film "Ram Setu.

The actor met the CM for dinner at the city's Trident Hotel. Akshay Kumar discussed his forthcoming feature "Ram Setu", which he announced on Diwali. The film, to be directed by Abhishek Sharma, aims to chronicle the story of the Ram Setu bridge. 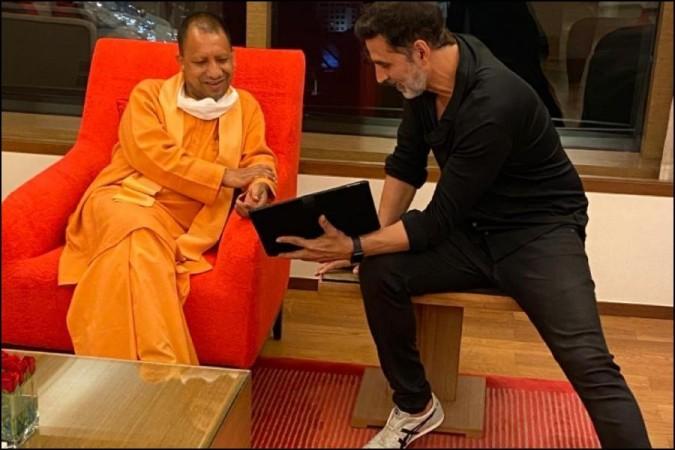 Bollywood producer Rahul Mittra had earlier told PTI that Yogi Adityanath is scheduled to meet a delegation of Bollywood filmmakers on Wednesday to discuss the future of the proposed film city in the state.

When did the CM arrive in Mumbai?

The Chief Minister reached the Maximum City around 7.30 pm. From the airport, he headed straight to the Oberoi Hotel, where he had a dinner meeting with Akshay Kumar.

The CM will be meeting bankers and film personalities at the Oberoi Hotel starting from 10.30 am till 3 pm. He's expected to address the press post that.

According to the reports in PTI, "The Bollywood personalities who will come-a-calling include et al."

Along with prominent industrialists, Adityanath will attend the listing of Rs 200 crore Lucknow Municipal Corporation (LMC) bond at Bombay Stock Exchange, making Lucknow the ninth city in India to have raised municipal bonds and the first city to issue such a bond after the launch of Atal Mission for Rejuvenation and Urban Transformation (AMRUT) Scheme.

For the unversed,  CM had expressed intentions to set up the country's 'biggest' film city in Noida.

In September, the CM had expressed intentions to set up the country's 'biggest' film city in the Gautam Buddha Nagar district, including the twin cities of Noida and Greater Noida.

"The CM, while addressing a review meeting, announced to set up the biggest and most beautiful film city of the country in Gautam Buddha Nagar. He instructed officials to search for suitable land in or around Noida, Greater Noida or Yamuna Expressway and prepare an action plan," an official statement said.

When is UP CM Yogi Adityanath's leaving for Lucknow

He will leave Mumbai for Lucknow on Wednesday (December 2) evening.

Nacho tested positive for the coronavirus. He was in contact with the patient earlier
Bale scored in the FA Cup for the first time since 2013. He has 4 goals in 13 games at Tottenham
Frank Lampard: I didn't have enough time to take Chelsea to the next level
Ozil will receive 3 million euros in Fenerbahce from July. Lifting - 550 thousand
Phil Neville now coaches the Beckham Club in sunny Miami. I left the England women's national team for this before the Olympics
Chelsea hope Tuchel will be at the match against Wolverhampton on Wednesday
Antonio Conte: Inter lost 0:2 in the last derby. We need to play Milan more decisively in the Cup
Source https://www.ibtimes.co.in/cm-yogi-adityanath-meets-akshay-kumar-mumbai-heres-what-they-discussed-830790

VIRUS TODAY: US numbers fall but new strains cause concern

NJ Congressman asks Biden to fire US Postal Service board

This Is How You Get a Backlash Against Biden

Godiva to close or sell all its U.S. chocolate stores

Effort to put Tubman on $20 bill restarted under Biden

Here's the full list of Biden's executive actions so far

Toy sales surge to a record $25.1 billion amid pandemic

Latest honor for Sidney Poitier: A film school in his name

‘All American’ Episode 2: What Time, How To Watch Live, Next-Day Streaming Information

Hollywood Elite in COVID-19 Vaccine Scramble: ‘It’s the Hunger Games Out There’

Google to lend its facilities for use as vaccine clinics.

Hawley tries to cancel Senate Democrats for “canceling” him

Tae Keller Wins Newbery Medal for ‘When You Trap a Tiger’

Stimulus checks, unemployment and more: Here's the aid that's coming from Washington -- and what might be coming soon

New Covid-19 case counts drop, but variants loom. So a vaccine maker is working on another booster

Bill to eliminate minimum sentences, except for most serious crimes, advances in Va.

Indianapolis police have arrested a minor in connection with the fatal shooting of 5 people, including a pregnant woman

Pets are back: Biden’s 2 dogs settle in at White House

Michelle Visage on Drag Race, Clubbing, and the Importance of Queer History

AMC's CEO believes his movie theaters will survive through 2021