Seven college students died and four were injured during a tragic incident in Bolivia when a railing collapsed, sending them falling from a fourth-floor balcony.

Wild video of Tuesday’s incident showed a mass of students from the Public University of El Alto packed onto the balcony before the railing gave way.

The tragedy happened in the university’s financial sciences building, as students attempted to enter a lecture hall for an assembly.

The footage, obtained by The Sun, also showed one young woman pushing another near the railing moments before it collapsed.

Bolivian Police general commander Jhonny Aguilera Montecinos on Wednesday said the woman seen in the struggle will be questioned as part of the investigation, local outlets reported.

Montecinos also attributed the cause of death for the victims as being due to “multiple trauma.” 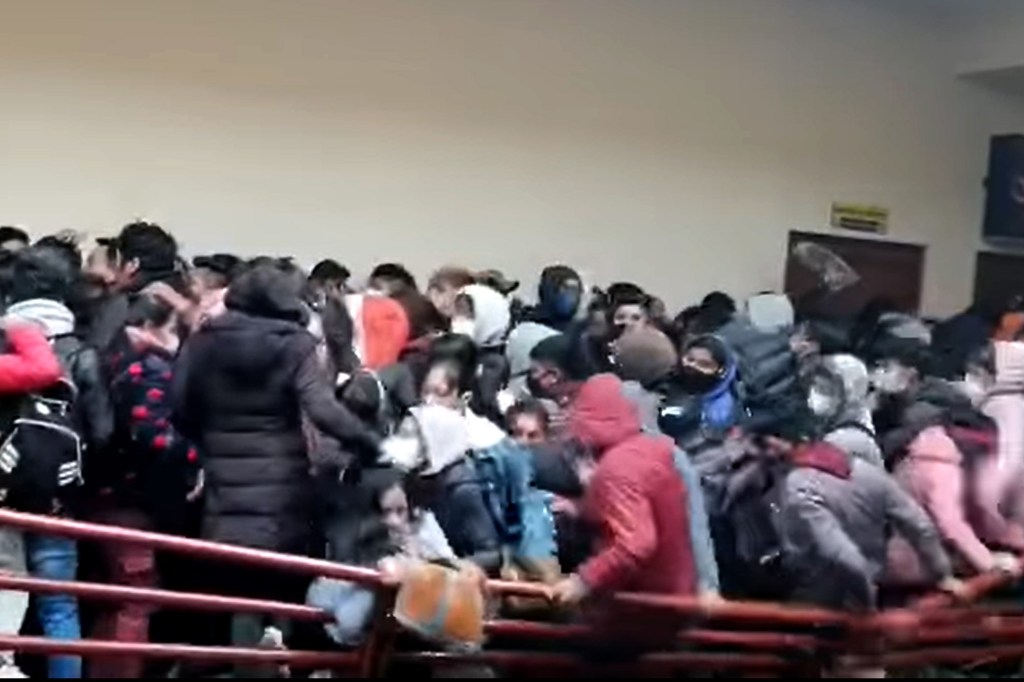 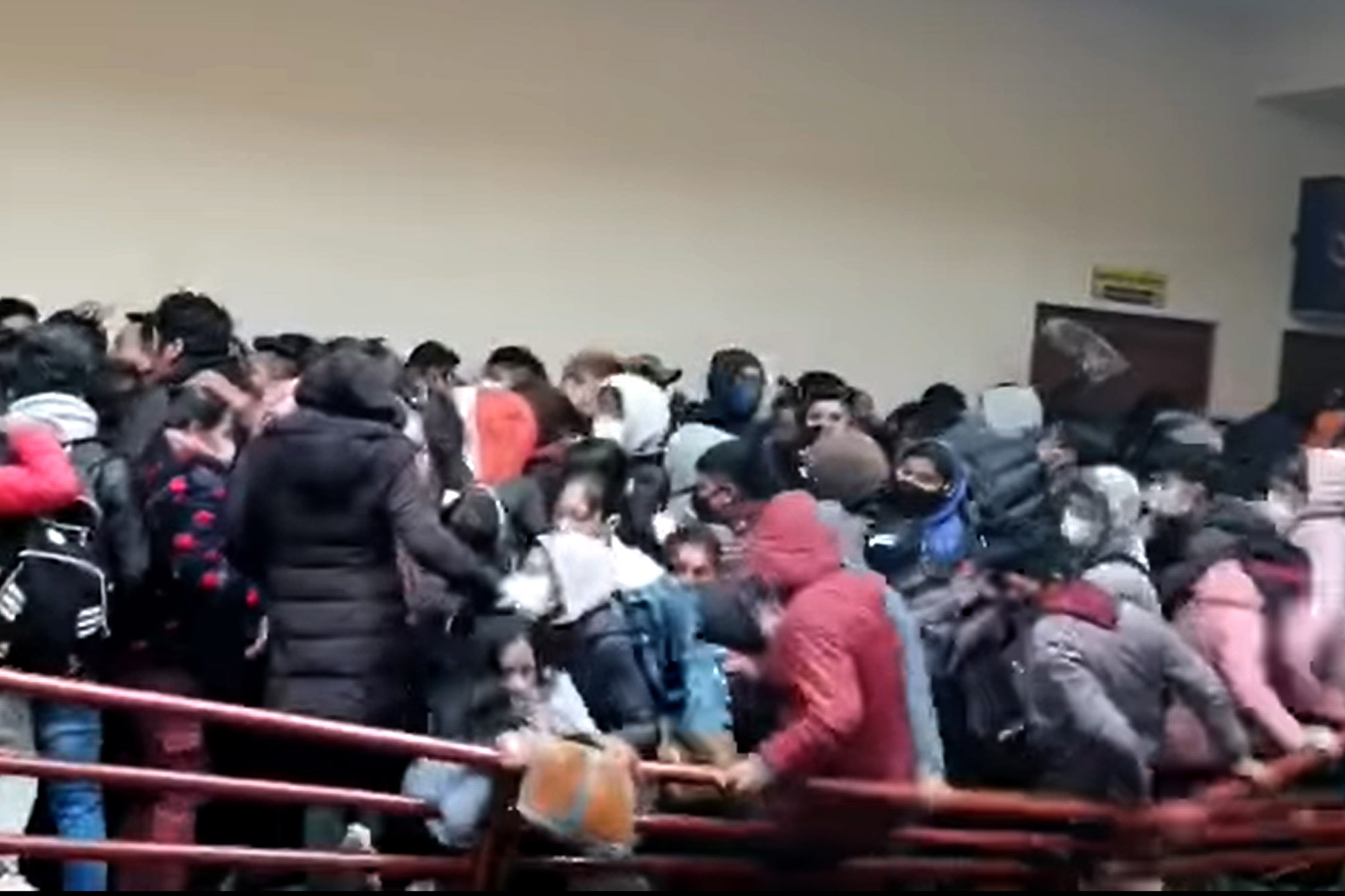 Video shows a railing collapsing and students falling off a balcony at the Public University of El Alto in Bolivia. 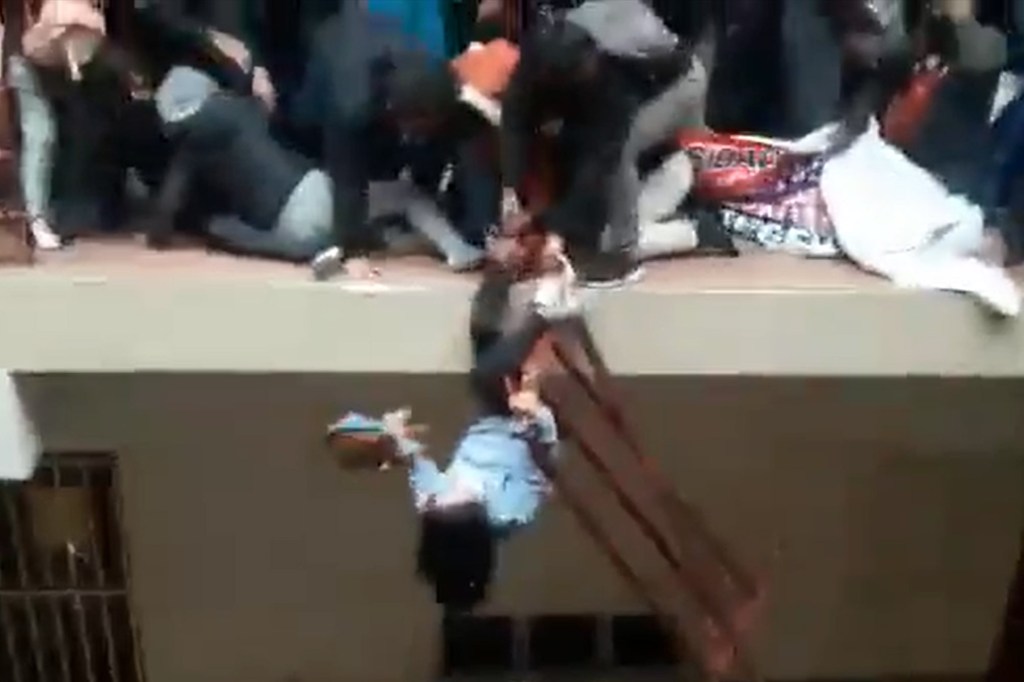 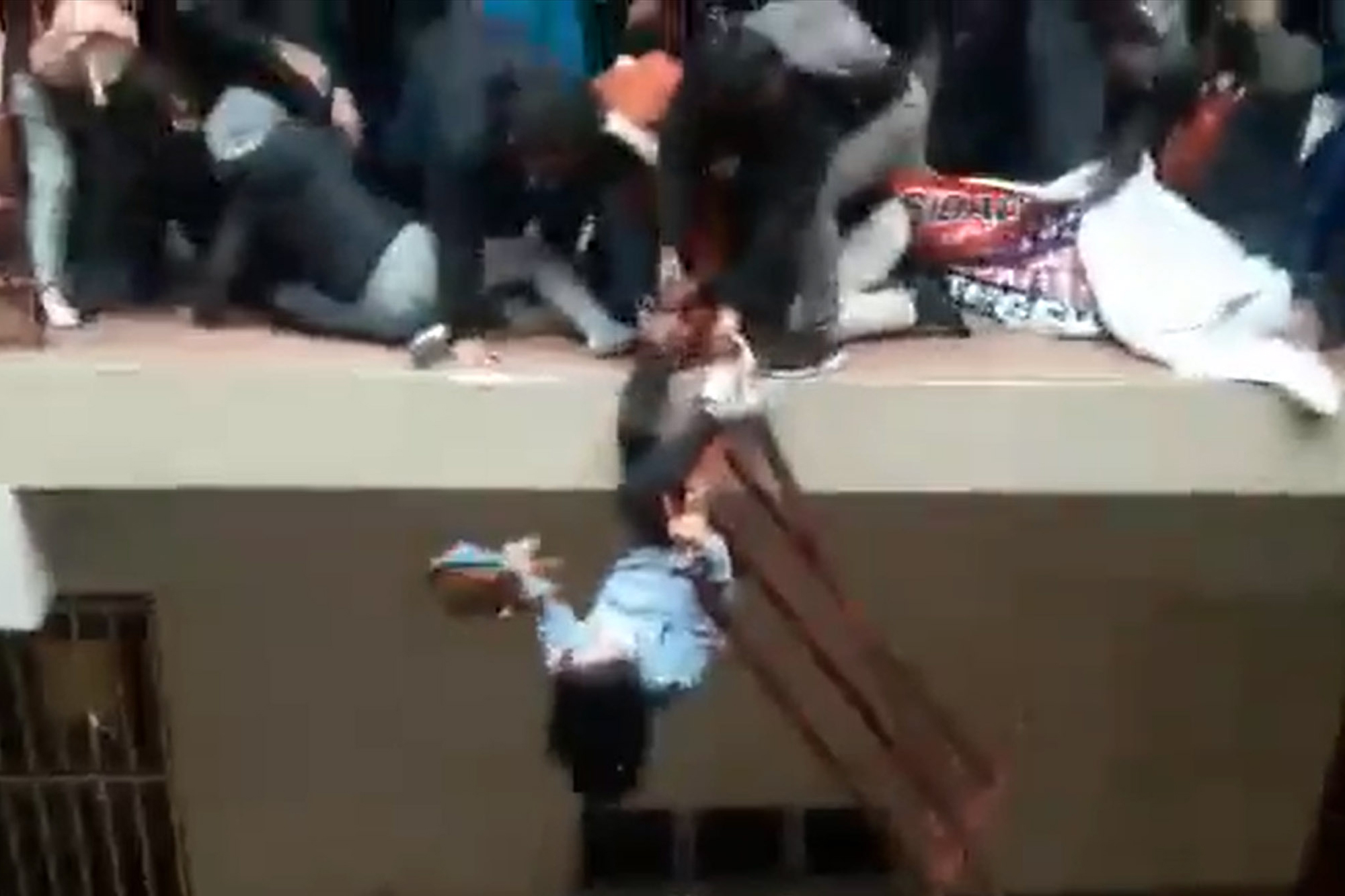 Footage obtained by The Sun shows one college student clinging on to life during the rail collapse. 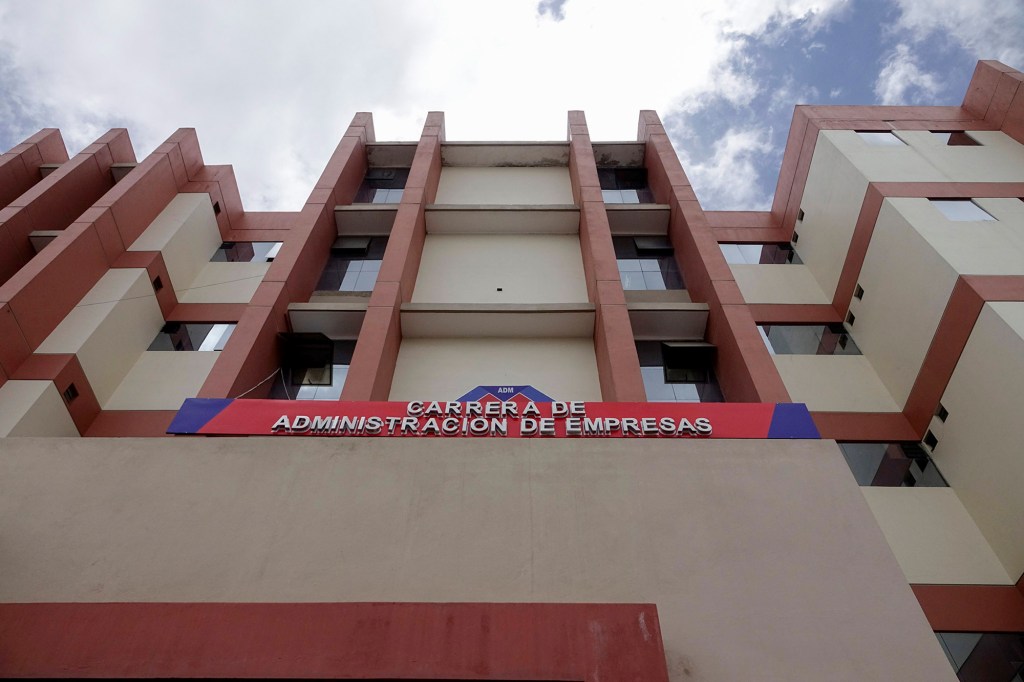 The tragedy occurred at the financial sciences building at the Public University of El Alto in Bolivia. 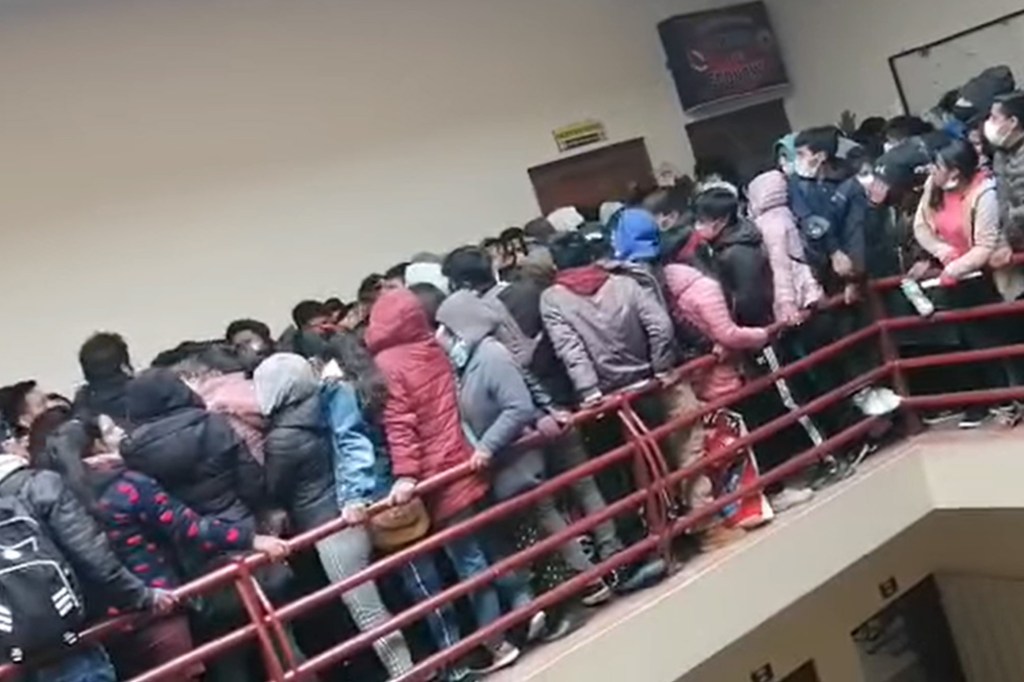 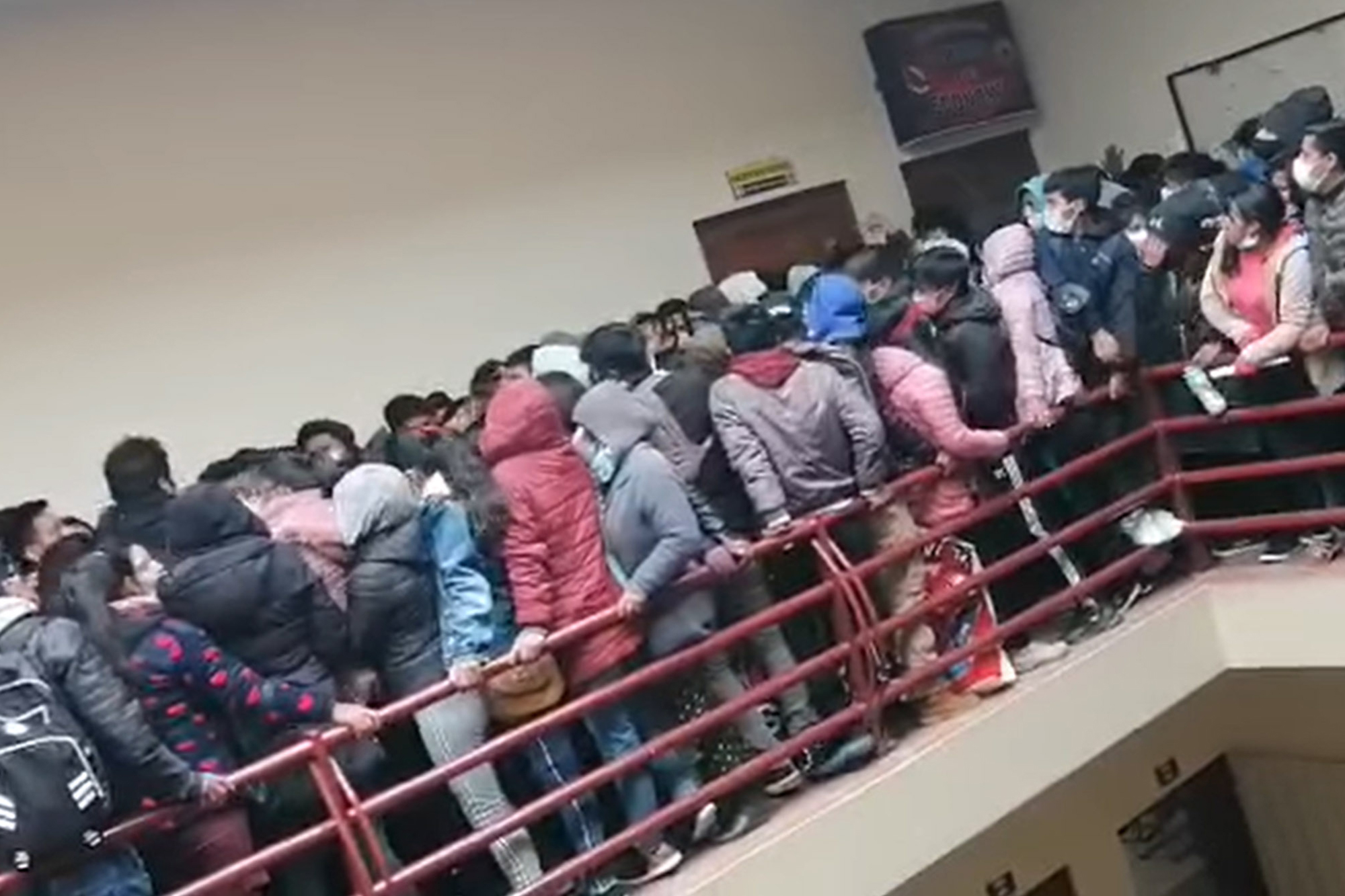 Seven college students died and four were injured in the collapse.

“We regret the tragedy that occurred at the Public University of #ElAlto (UPEA), where there were several deaths and injuries,” Bolivian President Luis Arce wrote on Twitter.

“Our deepest condolences to the people of El Alto and to the suffering families. We await the prompt clarification of the facts.”

Pioli on the removal of Ibrahimovic: Zlatan said that he did not insult the referee, did not show disrespect
Football on Ren TV is our childhood. 90s, Premier League, young Elagin, Beckham and Sulscher
Messi holds the 45th clasico. He repeated the record of Ramos
Tuchel on 4-1 with Crystal Palace: Chelsea had a great first half-hour. We were hungry and aggressive
Braithwaite and his uncle are building houses in the United States. They help black people become richer - they want to make 100 thousand of them millionaires
Mauricio Pochettino: Bayern is the best team in the world. PSG's goal is to advance to the Champions League
Messi, Dembele, Langle, de Jong, Pedri and Dest - in Barcelona's start for the match with Real Madrid

Utah deputies shot in the head during shootout outside jail

Stream It Or Skip It: ‘Knuckledust’ on Hulu, A Fight Club Movie That Bites From Tarantino And Guy Ritchie

Phillies vs. Braves prediction: All signs point to Atlanta

Driver arrested after Mercedes slams into scaffolding in Midtown: cops

Prince Philip the Meme Is Gone Too. RIP.

Declaration of Independence, Emancipation Proclamation up for auction at Sotheby’s

Prince Philip funeral to include COVID-restricted procession led by Charles

Report: Tennessee could owe a half-billion dollar debt to TSU

Maryland Gov. Hogan vetoes bill that would do away with life-without-parole sentences for juveniles

Upper West Side residents flipping out over ‘brigade’ of illegal ATVs

‘Another Round’ Team On The Idea Of Raising A Glass To “An Embracement Of Life” – Contenders Film: The Nominees

‘The Man Who Sold His Skin’ Inked With Mix Of Art, Dark Comedy And Social Commentary – Contenders Film: The Nominees

Severe weather forecast for parts of Gulf Coast; at least 2 dead in Louisiana

How Technology Can Improve CX for Government Services

Rep. Malliotakis: 'Biden has turned over our border to the cartels'

Unlike Biden, Americans don't see new infrastructure as a priority

‘Mank’ Team On Bringing Old Hollywood Back To Life: “It Was A Tricky Tightrope” – Contenders Film: The Nominees

Protest near Masters pushes back against Georgia voting law

How ‘The Trial Of The Chicago 7’ Became More Than A Period Piece – Contenders Film: The Nominees

With the GOP rapidly morphing into Trump, Democrats have reason to hope for 2022