Washington, DC, police are looking for a suspect in the assault of an Asian store owner

The Metropolitan Police Department said it is investigating the offense as "potentially being motivated in whole or in part by hate or bias."

Reports of anti-Asian violence have been on the rise nationally. Since March 19, 2020 -- as Asian Americans were being erroneously blamed for the Covid-19 pandemic -- Stop AAPI Hate said it received more than 6,000 complaints of racism and discrimination.
Congress is considering a bill to combat the surge in hate crimes targeting the Asian American community.

The store owner, Chonghu Lu, told police a man walked into Max Trading on 4th Street NE and asked to open a package to look at the merchandise, according to a police incident report. 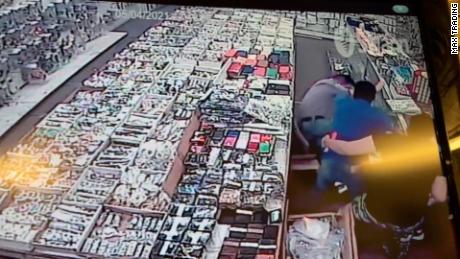 When Lu said no, the man began punching him in the face and made a racist statement before leaving the store, the report said. The surveillance video, provided to CNN by the store, shows the man punching Lu in the face, knocking him down and continuing to punch him.

"He beat him, punch him, he fell on the floor, and beat him," the wife of the store owner, Cong Cong Lu told CNN on the phone.

Lu said she tried to help her husband and stop the attack, but the man got away. She can be seen on the surveillance video putting herself between her husband and the man punching him, trying to protect her husband.

Lu said her husband had to get 14 stitches following the attack but is doing better.

When asked if she was worried about reopening the store even though the suspect hasn't been caught, she replied, "We had to open the store. We have to make a living, had no choice."

Police are also looking for a woman who they call a person of interest that was with the suspect at the time of the attack. In the surveillance video, the woman is seen trying to pull the man off the store owner as he punched him repeatedly.

‘For Your Eyes Only’ at 40: The Best Of The Roger Moore-Era James Bond Films

Salma Hayek Reveals Her Best Advice For A Successful Relationship

Discord over whether to halt South Carolina abortion case

Jennifer Aniston is ‘no longer afraid’ of the bread basket

Biden Administration To Relocate Afghans Who Assisted U.S. Troops During The War

Attacks on trans people are also attacks on science itself

Pelosi to announce creation of select committee on January 6

Brazil’s Controversial Environment Minister Has Quit. What Does It Mean for the Amazon?

Everything you need to prevent thigh chafing this summer

Try these 5 ways to practice mindfulness with your kids

Animals can navigate by starlight. Here’s how we know.

Is Solar Energy An Overlooked Opportunity?

Why Must Women Wait for the Supreme Court to Decide What We Can Do With Our Bodies?

What the hysteria over critical race theory is really all about

Rembrandt masterpiece thought lost is found after falling off wall

Four people shot in Englewood by unknown person in vehicle

Why Cubans see Biden as no "different from Trump"

A look at travel rules in popular European destinations

How to Watch the 2021 Travelers Championship Live

2 towns to rename streets in honor of Isley Brothers

Looking to get healthy? Here's why we recommend the new Nutribullet Slow Juicer

Has Pugazh Secretly Married his Muslim Girlfriend; Here's The Truth