Last month, Hurricane Delta became the fourth named storm to hit Louisiana this year, leaving residents and neighboring states with weeks of hard recovery efforts. Despite the difficult year, the disaster relief group Mercy Chefs is returning to the city where the hurricane made landfall, Lake Charles, to hand out meals for Thanksgiving.

"Across the board, within the nonprofits, this has been the most difficult year that anybody has ever seen," said Gary LeBlanc, the organization's founder. "The demands have been greater than we've ever seen and they've come more often than we've ever seen. In a year that's been full of COVID, it's been harder to raise funds than in any year before. At the time of our greatest need, we've had to face some dwindling support and we just have to go regardless."

The Norfolk, Virginia-based organization provides restaurant-quality meals to disaster victims, first responders and volunteers by deploying mobile kitchens to areas ravaged by storms, serving thousands of warm meals each day. The group is on track to serve an estimated 6 to 7 million meals by the end of the year, LeBlanc said. "We think something amazing happens over a shared meal," LeBlanc told CBS News. "You and I do it with our family and our friends. But to be in a disaster area, where folks have lost everything, and to be able to share a meal with them is the most rewarding thing that I can think of." 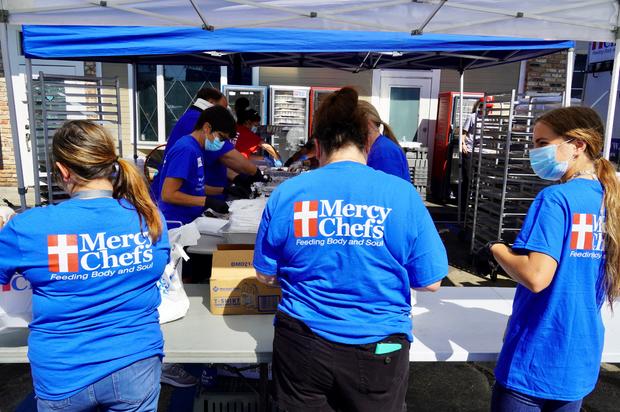 LeBlanc's drive to help others comes from his own experience with loss. In 2005, he and his family moved from New Orleans to Virginia. But when Hurricane Katrina hit, he lost his grandmother, his daughter lost her home and he saw a city he loved brought to its knees. "The people standing on bridges and in the news reports were people that I recognized, people that I had worked with," said LeBlanc. "So I went and did the only thing that I knew how to do, feeding people." LeBlanc returned to New Orleans, working with local groups to deliver food to hungry residents.

"I worked with all these other agencies and nonprofits and actually hated what I saw; and I got home and got angry about the way people were fed. I just believed there was a better way to feed people, something with more passion and more professionalism, more sanitation, more food safety. I just didn't see that. I mean, 14 nights in a row, opening cans of cold green beans and just scooping green beans out of the pan onto a plate. It was not the way I believed that you should feed people that had just lost everything."

After months of planning, the first Mercy Chefs outing took place in 2006, with just LeBlanc, his wife Ann and their two children. They helped a church in Conklin, New York, serve food to residents after a flash flood caused significant damage to the city. Nearly 14 years later, the group has enlisted 10,000 volunteers and has served over 8,000,000 meals.

Mercy Chefs isn't just LeBlanc's full-time job— it's also his legacy. His daughter, Megan LeBlanc Beckman, still remembers that first Mercy Chefs outing. Now an adult with a family of her own, she told CBS News that watching her father build Mercy Chefs made her who she is today. "From a young age, my dad taught me that loving others and putting their needs above my own is the only way to live and that thinking has totally altered the way I live my life," Beckman told CBS News. "His call 14 years ago to 'just go feed people' weighs heavily on his shoulders and it's reshaped all of our lives forever, but his focus is still about serving precious individuals the very best food we can make." 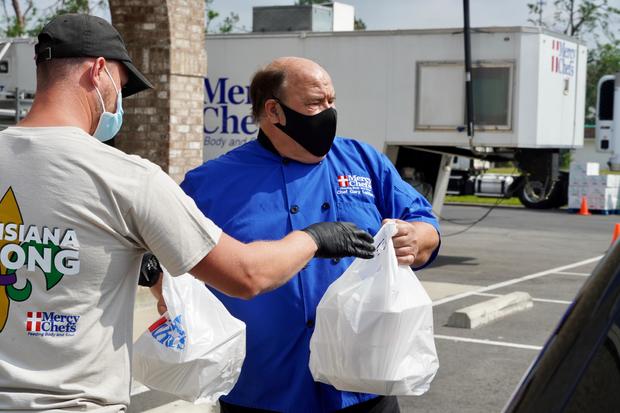 This week, Mercy Chefs is returning to Lake Charles to distribute Thanksgiving meals to the community and the surrounding area. "We want to create an atmosphere not of celebration, but of recovery. For a lot of folks, it sort of gives them permission to get out of the mourning period and begin to recover emotionally to have that special event or that holiday event."

"The thing that breaks my heart constantly is, we work hard, we feed more people, we see more people fed, but every time I feed a person, I see three more that I can't get to," said LeBlanc. "If I serve 10, I see 30. If I serve 30, I see a hundred. I am just driven to get to as many people as I can. I know I can't get to everyone, but I have to get to everyone that I can."

In the future, LeBlanc hopes to increase the number of meals they can serve. "Our team is tired, our equipment is beat up, and we've been stretched in every way possible," he said. "We made the commitment earlier this year, we said, as long as the storms keep coming, Mercy Chef's is going to keep going."

Pep Guardiola: Man City will not sign anyone in the winter
Ronaldo's smile was like a sarcastic grimace of surrender. Tacchinardi on 0:2 with Inter
Klopp on Alisson: My God, what a goalkeeper! Needed him at 2 points Manchester United
Eldor Shomurodov: Torres and Drogba are my idols. Would like their autographs
Alaba is almost real. It seems that instead of Ramos: Sergio will not be able to replace directly, but will affect the team through a change in style
Alaba's father on Real Madrid: The contract has not been signed, the decision has not yet been made. There are other clubs
Alaba has not yet agreed with Real Madrid. The player is in talks with Barca, City, Manchester United and PSG
Source https://www.cbsnews.com/news/mercy-chefs-hurricane-disaster-relief-louisiana/

What Should You Do When Team Members Aren't Pulling Their Weight?

9 in 10 say pandemic not controlled; two-thirds intend to vaccinate

America almost lost its democracy. Here's how its citizens can protect it

European aviation agency: 737 Max to be cleared next week

4 hurt in string of shootings in Pennsylvania’s Poconos

Viewers' guide to Biden's Inauguration Day: Everything you need to know

'Here between us', the game of an entrepreneur who wants you to 'spill the beans'

Daywatch: COVID-19 restrictions loosened in Chicago, the man accused of living at O’Hare airport and a $1 Elgin mansion

Joe Did It. But How?

No. 8 Houston looks for home win vs Tulsa

Northwestern looks to knock off No. 10 Wisconsin

'Secret codes' to learn a new language by watching Netflix

Inside the Capitol Attack

Inside the fight for the Capitol: US Capitol Police officers recount being unprepared and 'betrayed'

A Mood Check With Trump Supporters

Woman Is Sentenced to 43 Years for Criticizing Thai Monarchy

How Trump will hand off the 'nuclear football' to Biden

Joe Biden Can Unite the Country By Being Boring

Zoom funerals, outdoor classes: How jails are evolving amid Covid

Tim Graham: With Biden as president these 5 trends will vanish from the liberal media

These Best Looks From Inaugural Balls Will Always Win Our Vote

A nursing home network is offering cash bonuses to employees who get a COVID-19 vaccination. How effective are such incentives?

Dear Care and Feeding: I Told My Kids They Could Pee Outside and Now They Won’t Stop

The Flower of Abundance, Afore or Stock Market: Where Should I Invest?

Joe Biden Needs To Bolster U.S. Democracy. His Pentagon Pick Could Threaten It.

Tesla has started deliveries of the Chinese-made Model Y

Texas' Abbott rips vetting of National Guard: 'This is the most offensive thing I've ever heard'

The 5 most important eSports events of 2021

How Tony Blinken’s Stepfather Changed the World—and Him

New Yorkers in the Biden Administration

The Hardest Inaugural Address in Generations

This 2021, gyms will bet on a hybrid model to survive

‘Lupin’ Will Be Seen By 70 Million Subscribers, Netflix Claims