'We're just overwhelmed': The view from inside hospitals as coronavirus surge hits

For months, California hospitals avoided the dreaded surge in coronavirus patients that threatened to overwhelm wards and stretch thin staff and supplies. But now, with coronavirus hospitalizations in the state at an all-time high, doctors and nurses at some hospitals say the nightmare has arrived.

Hospitals up and down the state report that their beds are filling up fast, staffers are tiring and medications used to treat coronavirus patients are running low. The surge has hit California unevenly, with some facilities reporting their numbers staying flat in recent weeks, while others have risen sharply.

“We’re getting to the point where we’re just overwhelmed — emotionally, physically exhausted. We don’t have enough workers for all these patients; we’re working extra shifts,” said Mary Lynn Briggs, an intensive care unit nurse at Mercy Hospital in Bakersfield. “I’m expecting things to go from bad to worse over at least the next couple of weeks.”

The months since March allowed hospitals time to prepare for such a surge. Doctors learned more about how to treat COVID-19 patients, hospital administrators obtained more protective gear, and staffers know more about how the coronavirus is transmitted and how to protect themselves. 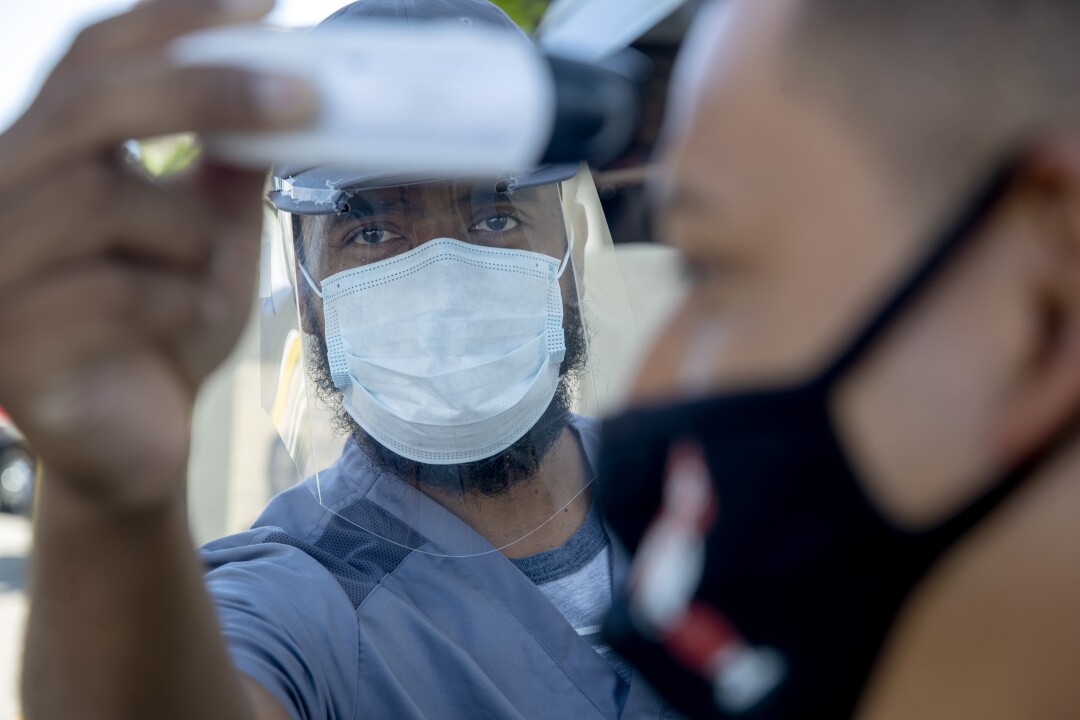 “When this all started in March, it was an amazing dress rehearsal on fire,” said Sylvain Trepanier, chief clinical executive for Providence Southern California, whose 13 hospitals in Orange, L.A. and San Bernardino counties had as of Friday experienced a 40% increase in COVID-19 patients over the last 10 days. “Thank God we didn’t see that wave [then] as big as we anticipated, but that allowed us to be ready.”

Recent projections suggest that the hospital system in California will be able to handle the demand, in part because busier hospitals can transfer patients to facilities with more space. But even still, the strain on some hospitals is unprecedented.

Health officials have linked the surge to an increase in transmission of the coronavirus that began in late May, as some counties began reopening businesses, thousands gathered in large protests and some people, tired of staying home, met up with family and friends.

The growth in hospitalizations has prompted a rollback of reopenings, but the benefits have yet to be seen in the case numbers.

Dr. Stephanie Loe, an emergency room physician with the Riverside University Health System, flew to New York in the spring to help treat COVID-19 patients when the surge didn’t materialize in California. 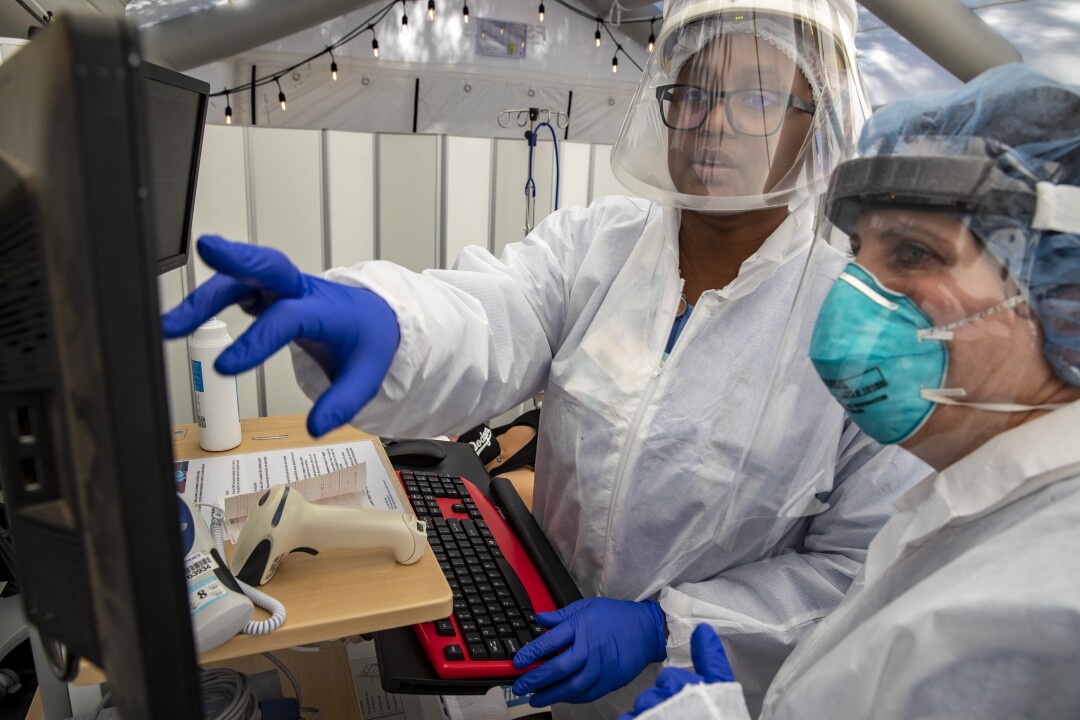 Nurses Janil Wise, left, and Melinda Gruman look over the medical chart for a pregnant patient at Providence Holy Cross Medical Center who was exposed to a person with COVID-19.

At the time, only a few coronavirus patients were in her ER at Riverside, and the numbers of patients with traumas like gunshot wounds and injuries from car accidents were lower than usual, probably because of the stay-at-home orders. Many people also seemed to be avoiding the ER for treatment for strokes and heart attacks.

Now, those usual ER patients are filing in again, as are large numbers of COVID-19 patients, pushing the hospital to its capacity, she said. Loe said ER doctors are accustomed to an extremely busy shift now and again, “but right now it’s consistently bad.”

“Every day in the last two weeks has been, if not steady, consistently getting worse,” she said.

The increase in coronavirus cases in California has prompted hospital leaders to kick into high gear and prepare for a surge, said Carmela Coyle, head of the California Hospital Assn.

They are drafting plans to shift patients between hospitals if needed, bolstering testing supplies, training staff to treat COVID-19 patients as well as “looking at every nook and cranny within California’s hospitals to see if there is more space,” Coyle said at a news conference last week.

“California hospitals have been and continue to be ready to deal with the COVID crisis,” she said.

Many healthcare workers say that even if hospitals can find space to put beds, staffing remains a bottleneck, one that could become even more restrictive if nurses begin falling sick from the virus. Some nurses say they believe that will happen because of inadequate protective gear. 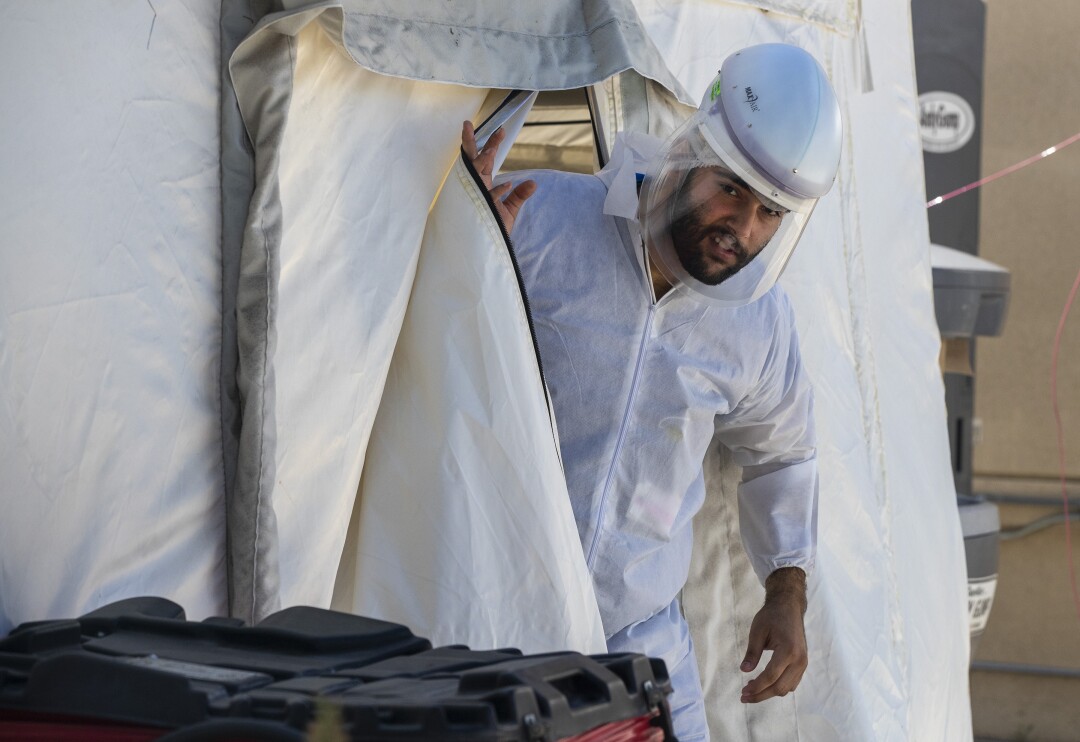 Anne Caputo-Pearl, a nurse at California Hospital Medical Center in downtown Los Angeles, noted that before the pandemic, N95 masks were worn when a nurse entered a patient room, and then immediately disposed of. Now, staffers are wearing a single N95 mask per day, or even per week, she said.

The Centers for Disease Control and Prevention sanctioned the shift in policy early in the pandemic amid a nationwide shortage of protective equipment. That has left many healthcare workers feeling unsafe at work, even if their gear technically meets federal standards.

“Anyone who can read can look on the box and see these are all meant to be single-use items,” Caputo-Pearl said. “Everybody knows what it means to be a nurse in the hospital, but nobody signed up to be sacrificed on the altar of this pandemic.”

Fear and panic within hospitals has subsided since March and given way to weariness, healthcare workers say.

Briggs, the Bakersfield nurse, said the recent surge has forced ICU nurses who are typically assigned to one patient to watch over two. In a recent week, she worked five 12-hour shifts without a single break, she said.

Briggs, who said this moment was unlike anything in her 30-year career, described the added toll of caring for patients who are so sick.

She has recently seen people admitted to the ICU, including some in their 20s, suffering from COVID-19 and experiencing organ failure, with their kidneys, livers or hearts shutting down. Staff morale is low when it feels like few patients ever leave the ICU, she said.

Plus, nurses serve as go-betweens for patients and their loved ones because visitors aren’t allowed in hospitals due to the pandemic.

Many healthcare workers said they felt frustrated by seeing people leave their homes without masks and not taking the virus seriously. The dire consequences of their actions, they noted, are playing out on their hospital wards.

At Desert Valley Hospital in Victorville, physicians are treating more COVID-19 patients than ever but are short on remdesivir, a medicine used to improve patient outcomes, said Dr. Imran Siddiqui. Many hospitals reported not having enough of the drug and being forced to ration it, choosing which patients receive it and which don’t.

Siddiqui said he has heard other hospitals don’t have enough oxygen tanks or other machines for breathing treatments. Many are struggling with staffers falling ill, often not at the hospital but in their communities as case numbers soar, he said.

“It’s worse than the first time,” he said. “It’s just spreading like wildfire and the hospitals are getting slammed.”

However, many healthcare workers reported that it seems that survival rates for patients are improving, though there is not yet clear data. Physicians have some medicines that can help and have learned that delaying when a patient goes on a ventilator can actually improve their chance of survival.

Siddiqui said doctors have also realized that many patients were dying of blood clots, so they now are quickly prescribing blood thinners to COVID-19 patients. These improvements, in addition to a younger demographic falling sick, could contribute to death rates in California remaining relatively stable despite the recent surge in hospitalizations, he said.

In Ventura County, the number of people hospitalized with the virus has quadrupled since early June. That surge has been felt at Los Robles Regional Medical Center in Thousand Oaks, though there remains ample capacity, said Dr. Gabriella Sherman, the hospital’s chief medical officer.

But she said she is watching the numbers carefully as conditions shift, often unpredictably.

“It is something that we know would change overnight,” she said.

Bas Pro 1:2 from Inter: after the opening 20 minutes, Bayer entered the game. I believed that we could do something
Conte on 2:1 with Bayer: When a coach sees such dedication, he is always happy
Sanchez finished the match against Bayer, despite the injury
Solskjaer is the fifth coach with whom Manchester United reached the semi-finals of the European Cup
Manchester United are set to buy Sancho this summer despite Borussia's claim that he is staying
Shirokov beat the judge at an Amateur tournament: promised that # # # # # [vdarit] for a red card-and # # # # # [vdarit]
Brunu has scored 11 goals in 20 games for Manchester United. 7 of them were penalties
Source https://www.latimes.com/california/story/2020-07-13/overwhelmed-hospitals-coronavirus-surge-california

How the Nets became a humongous NBA bubble surprise

Thanks to Trump Our Foreign Policy Isn’t in Crisis, It’s Recovering

What Will It Be Like With No U.S-Russia Nuke Limits?

Meghan Markle Was The Writer Behind An Anonymous Hollywood Blog, Book Says

Expert: Kids may spread Covid-19 like the common cold

Dear Abby: Law enforcement officer feels judged by some in the family

Which Below Deck Med Crew Member Was Caught With Drugs?

UP BJP leader shot dead during morning walk in Baghpat

College football players and coaches push to save the 2020 season

L.A. County may pay $1.35 million to settle case over use of public funds to back Measure H

Putin pushes for more integration with Belarus after election unrest

KGF Ram on Sanjay Dutt's character: 'If Garuda was cruel, Adheera's character is the cruelest'

Trump escorted from briefing after shooting near White House

Astros’ McCullers no-hit bid broken up in 7th against Giants

Get used to seeing Collin Morikawa take PGA by storm

Fewer Airline Passengers, but a Higher Rate of Illegal Guns in Carry-On Bags

Ganges River flows with history and prophecy for India

Spain Overtakes Britain for Most COVID-19 Cases in Europe

Detroiters split on calls to 'defund the police'

Thousands gather for wild rave at Prospect Park in Brooklyn

Extreme poverty rises amid pandemic, and a generation's hopes begin to fade

Niyo: Coaches, players look for a Hail Mary to save fall college football

Opinion: Time is now for a Black woman vice president

Review: This 'black-ish' episode was hidden for years. Here's why it still works

From Belarus to Hong Kong, journalists 'are bearing the brunt of the global surge in repression'

Cabrera and Soto power Nationals to 16-4 rout of Matz, Mets

The UWS is falling apart, and lefties seem too woke to care

U.S. Contractor Knew of Explosive Material in Beirut Since at Least 2016

Kaitlyn Bristowe shares fitness progress ahead of 'Dancing with the Stars': 'I've been working so hard