What does it take to pull off a drive-in dance show? L.A. Dance Project explains

As the pandemic stretches toward year’s end, dance companies have been forced to experiment and to move beyond virtual shows as a means of resuscitating the art of live performance. Some have found an unexpected lifeline not on the stage but in a parking lot.

But what does it take to stage a COVID-19-compliant show? More than you might think.

On opening night, cars slowly entered L.A. Dance Project’s downtown parking lot as a masked attendant directed vehicles to frame the outdoor stage. Audience members were instructed to wear masks if they wanted to leave their windows open. If they preferred to be maskless, they could tune to a radio station frequency to hear the streamed performance score.

They were instructed to turn off headlights, so the slightly raised, makeshift stage was lighted only by portable lights. When one car struggled with directions, the dance company was prepared with a car-sized blackout blanket.

With eerie, gestural choreography, and the sound of the city as a backdrop, “Solo at Dusk” felt like stumbling into a secret ritual.

But as wildfires raged across the West Coast, filling the air with unhealthy ash and smoke, the company postponed shows soon after the premiere. About a month later, “Solo at Dusk” reopened and is nearly sold out. (Recent fires in Orange County renewed air-quality concerns but all remaining shows are continuing as scheduled.) 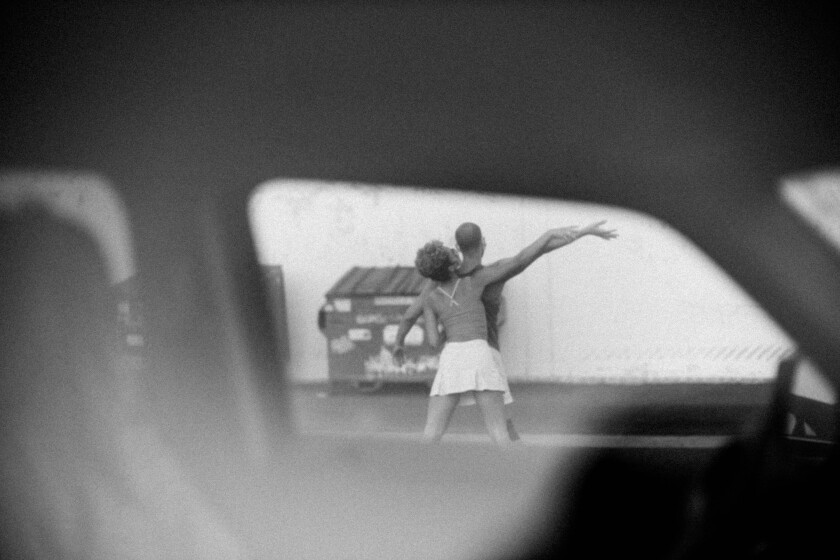 L.A. Dance Project drive-in dance performances are the new normal for companies during the pandemic.

Once Artistic Director Benjamin Millepied realized the pandemic would drastically upend the arts for an uncertain amount of time, he began thinking of new ways to keep performances alive, realizing “you don’t need 100 people to see a show for it to have impact and have meaning,” Lent said.

Originally, the company envisioned a small outdoor audience of 30 people. But Lent and Millepied learned they “weren’t allowed to do that, which is really frustrating when you see restaurants opening and you see art galleries having exhibits.”

The two struggled to find a protocol for staging a dance show and reached out to the World Health Organization and L.A. Mayor Eric Garcetti’s office for guidance.

“We were told that we could not have audiences that were not in vehicles,” Lent said.

The company pivoted to the drive-in format with a micro-audience to ensure everyone had a clear view of the dancing. Only eight cars ($100 per car, with a maximum of six people inside each) are able to attend at one time in L.A. Dance Project’s parking lot.

“It made it more intimate,” Lent said. “More communal in a way, than having 150 people sitting in a theater space.”

Dancers signed an agreement, promising they would only interact with their pod. That meant isolating from family and friends and limiting activities outside of rehearsal. They could not protest, hike, ride in Ubers, eat at restaurants or go to bars.

“I truly believe the only way we were able to successfully create and complete the residency is because each member committed to following the protocol set forth so diligently,” Lent added via email.

Dancers learned choreography individually and outside as well as in masked sessions with Smith and Schraiber, whom the company housed in L.A. as part of the commission. If someone rehearsed inside L.A. Dance Project’s studios, the space was aired out for 24 hours. “Solo at Dusk” features just one duet — a dancer couple who lives together.

The cast took weekly COVID-19 tests and had their temperatures taken daily. The company also used a tracking system, a spreadsheet where dancers and crew input their specific whereabouts in each 24-hour period. LA Dance Project drive-in performances are held in the parking lot of their downtown studio.

For choreographers Smith and Schraiber, working with L.A. Dance Project was an ideal environment for creating dance during the pandemic.

“It was very different from many other processes or things that I have been part of,” Schraiber said. “We had to find many solutions to the obstructions that stood in our way.”

One dilemma, Smith said, was the masks themselves.

The new normal for rehearsals eventually became part of the show.

Smith worked with company dancer Janie Taylor to design a floral mask as a costume piece. “One rehearsal I was like, what if flowers grow over their faces. After all this time of not seeing our faces, nature would take over and overwhelm us,” Smith said. “From this oppression, something would grow over us.”

The idea behind the costume floral mask began to inspire the piece itself.

“We started to ask, who are these people that don’t have eyes to cry and don’t have a mouth to speak or sing,” Smith said. “How do they communicate, and how do they express themselves when so much has been taken away from them?” Lent said the performances are not a huge moneymaker for L.A. Dance Project, considering the cost of commissioning choreographers, paying dancers a full-time salary and building the 30-by-30-foot outdoor stage, an exhausting assembly process that took six hours. The hope is to continue performing the two works in early spring, along with finding a sponsor or donor to underwrite shows, which would allow the company to begin making a profit.

“It’s more about still giving people the opportunity to see art and dance and the joy that gives to people, especially in a moment like this,” Lent said.

Transforming the dance model to survive the pandemic also means transforming the way audiences communicate at shows. The email instructions for “Solo at Dusk” included one suggestion: “Honk if you love dance!”

But when the opening-night performance ended and performers stepped up to take their bows, people in cars seemed hesitant. Then there was a cacophony of sound.

The ending “was a little awkward in the moment,” Lent said. “But when people did do that, it felt right.”

Steve McManaman: Real Madrid are an aging team. They need new players if they want to reach their previous heights
ISCO could move to Sevilla in January. Lopetegui is personally Interested
Bilyaletdinov about the Champions League: Loco can leave the group. Unmotivated Bayern can be beaten in the 6th round
Zlatan Ibrahimovic: I Thought about retiring, but I wanted to change the mentality of Milan
Vasco da Gama sports Director: Balotelli will be like Maradona for us
Real Madrid won't buy Mbappe in the summer of 2021 due to the crisis (Le Parisien)
Ibra scores in 39, Buffon drags in 42, Ronaldo has no plans to finish. Is football really getting old?
Source https://www.latimes.com/entertainment-arts/story/2020-10-29/la-dance-project-drive-in-events

Self-employed? Your state may owe you money

Is shopping in stores safe during the coronvirus pandemic?

Headed to Delaware beaches next year? Bring your own bags

No breakthrough in India’s talks with protesting farmers

Gisele Bundchen radiates in bikini ahead of Monday's lunar eclipse

Man arrested after boy forced out of car, killed by vehicle

Int’l Critics Line: Anna Smith On Poland’s ‘Kill It And Leave This Town’

2 killed, 15 injured as car plows into pedestrians in Germany

The 10 best books of 2020, according to Amazon editors

US construction spending jumps 1.3% in October

Trump tells Georgia governor to 'do something,' as Kemp says interfering with election is illegal

Sephora to take over cosmetics in Kohl’s stores

US Ready for ‘Immediate Mass Shipment’ of COVID-19 Vaccines: Agency

Trump tells GA Gov. Kemp to 'call off election' because 'it won't be needed'

How Selena Gomez inspired this bikini for her friend’s line

Nasdaq to Corporate America: Make your boards more diverse or get out

24 Christmas lights to illuminate your home for the holidays

Review: Hitman hiding out in England stars in 'Eddie's Boy'

Another Official Is Ousted From the Pentagon

Column: The despised Pilsen landmark plan gets a hearing today. Here’s how to save the treasured neighborhood.

The Ultimate Secret of Building a Loyal Customer Base

Coronavirus was present in US earlier than initially thought: CDC scientists

Dallas restaurateur apologizes for telling twerking women to 'get the f--- out,' claims context misunderstood

Car in Germany plows into pedestrians, kills at least 2

Hannity urges Trump to pardon himself

Car Plows Into Pedestrians in Germany, Killing at Least 2

Stream It Or Skip It: ‘Peyton’s Places’ Season 2 on ESPN+, the Legendary Quarterback’s Tour of NFL History

Why Hasn’t Biden Named a Secretary of Defense Yet?

Johnny Galecki and Alaina Meyer break up, are co-parenting baby

Why Companies are Turning to Flatfile to Solve Data Onboarding

Pop culture’s department stores taught us what to want

The Wedding I Never Thought Would Happen

After Trump, Europe's Populist Leaders Will Have 'Lost One Of Their Cheerleaders'

A Musical Homage to ‘Ratatouille’

Why is Sensex surging even when economy is in technical recession: Explained

US students fall behind in math amid pandemic school closures