Grizzly Flats had stood in the foothills of the Sierra Nevada in California since 1851. Lumber was the economic backbone of the region for decades. But it took only 15 minutes one night last August for nea of the town to be destroyed, engulfed by the Caldor Fire that had roared out of the Eldorado National Forest.

The fire would burn for two months, scorching more than 200,000 acres and costing $271 million to extinguish.

It started as a small plume of smoke about four miles south of Grizzly Flats at 7 p.m. on August 14th, 2021. Since the fire was on federal land the U.S. Forest Service was in charge, responsible for calling in firefighters and resources. A 60 Minutes investigation discovered that problems started right away: maps were out of date, firefighters had trouble locating the fire.  As she was listening to her police scanner, resident Candance Tyler said her heart sank.

"They're sending them down Caldor Road. Well, it's been washed out for three years," Tyler told correspondent Bill Whitaker. "How are you going to get a tanker down there? Have you seen the washout? It's huge. It would take a month of Sundays to fill that hole in or cut a new road." 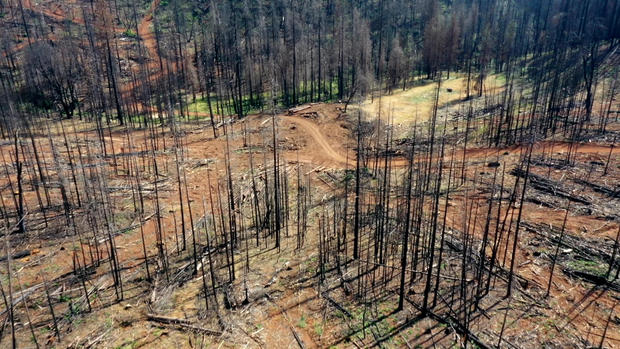 Scorched forest from the Caldor Fire

Keeping national forests healthy—including maintaining roads—is a central part of the Forest Service's mandate. But 60 Minutes found many roads in the Eldorado Forest were impassable—blocked by downed trees and deep ruts. When the Caldor Fire broke out, fire engines had to backtrack, a costly two-hour delay.

Retired fire captain Grant Ingram was also listening to his scanner. Ingram fought fires for 35 years for BOTH the U.S. Forest Service and for Cal Fire, California's state firefighting agency. Ingram investigated the initial spread of the fire for the local fire district and he told us he believes the U.S. Forest Service management team bears much of the blame.

"The leadership failed to give the team on the ground what they needed to do to put that fire out in a timely manner," Ingram told Whitaker.

"You flat out say it's a failure of leadership?" Whitaker asked.

"Absolutely," Ingram said. "They failed to understand where the fire was going to go. Then they failed to bring in enough equipment and resources to mitigate that fire. And then, they failed to protect the community of Grizzly Flats when they knew it was headed that way."

Ingram said one of the most consequential decisions came in the early hours of August 15, when the fire was still small. At 1:43 a.m., just hours into the fire, the Forest Service shut down operations for the night.

"Will be pulling everyone off the line for accountability" reads the dispatch log, a minute-by-minute account of the fire that 60 Minutes obtained through a Freedom of Information Act request. The Forest Service said it was unsafe to continue and it wanted to reassess.

"When I worked for other agencies, we typically fought fires at night. That was the best time to do it," Ingram told Whitaker.

"But yet this Forest Service incident commander was ordering people to stop," Whitaker said. "Turn back, go home."

"Right. I couldn't believe it at first," Ingram said. "Firefighting is dangerous but you don't call 9-1-1 when you're a firefighter. You are there as 9-1-1."

The order to pull out didn't sit well with state and local firefighters who'd raced in to help the Forest Service. A number of them told 60 Minutes that they believed that night was their best chance to contain the fire. They also said they were trained to fight wildfires 24/7 until the fire is out. No one would go on camera for fear of losing their jobs, so 60 Minutes agreed to conceal this firefighter's identity.

"So when you heard the incident commander say he was pulling out, and other equipment, fire engines and bulldozers left with him, what did you think?" Whitaker asked the firefighter.

"What in the world's going on here? I mean, like what the hell? We have a fire. You have to suppress the fire. It—it's just that simple," the firefighter said. "I think everybody on that hill that night figured that if we didn't get ahead of this thing that night, we were going to be in trouble."

The Forest Service knew it too. Their own fire model for August 15, also obtained through the Freedom of Information Act, showed Grizzly Flats in the middle of the area almost certain to burn—an 80-100% chance—if the fire wasn't put out. Yet that same day, the Forest Service dismissed some half-dozen state Cal Fire engines and crews, letting most of them go before their replacements arrived. Ingram told 60 Minutes that breaks every rule of firefighting.

"It made no sense to me. And it—it should never have happened," Ingram said.

On the second day, August 15, the fire engulfed 200 acres. On August 16, 700 acres. That night, the winds in the canyon whipped the flames into a frenzy and Caldor exploded, consuming 11,000 acres.

Flames jumped from treetop to treetop, picking up speed. The Eldorado National Forest was so dense with dead trees and parched underbrush, it was like a pyre waiting for a match.

"Now everything's on fire. It's all raining down on this community," Ingram recounted. He told Whitaker it was sitting in front of a blow torch.

The U.S. Forest Service says its resources were stretched thin. The Dixie Fire, which would become the second-largest in California history, was burning ferociously nearby. But Ingram told 60 Minutes there were regional crews available. And he pointed to the dispatch log that showed 12 extra fire engines being called up as the flames were tearing into Grizzly Flats. But it was too late.

"All of a sudden all these fire engines start showing up," Ingram said, "and it's like, well, where were they two days ago? Why weren't they in the neighborhood of Grizzly Flats prior to this fire even getting there?" 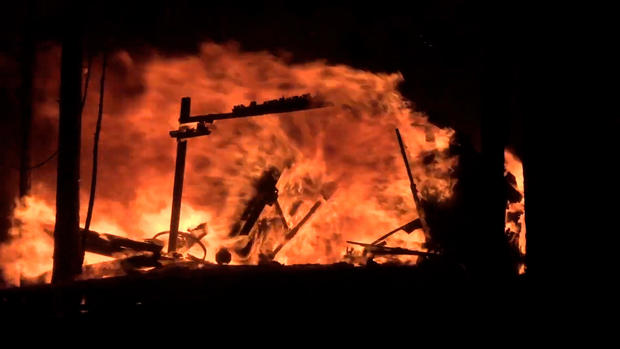 Several miles south of Grizzly Flats at the Leoni Meadows campsite, retired Sacramento Deputy Fire Chief Lloyd Ogan told Whitaker the flames were 30 feet above the treetops that night, hissing and crackling. Ogan said he knew then the Caldor Fire was out of control.

In all the wreckage of Caldor, Leoni Meadows stands out—an island of green in a charred, desolate wasteland. The fire skirted the camp thanks to a massive fuel break—or buffer zone—the camp had built. Ogan pointed out where they'd thinned trees and cleared the combustible underbrush. When Caldor hit, there was little material left to feed it. The fire slowed and changed direction.

Ogan showed 60 Minutes the Forest Service land next to the camp that had not been cleared. There, everything burned.

"There was no management on the Forest Service side. And that's the result," Ogan said.

"It's kind of mind-blowing to see all that devastation there and it gets to the property line of the camp, where the land was managed, and this all survived. It's all green," Whitaker told Ogan. "Could this have been replicated around Grizzly Flats?"

"Yes. Absolutely," Ogan said. "That's what the Trestle Project was all about, was to do exactly this. And had that been done, there's a high probability Grizzly Flats wouldn't have burned."

The Trestle Project was launched by the Forest Service nine years ago, when its own research warned Grizzly Flats could be incinerated if wildfire ignited the overgrown Eldorado Forest. The agency promised to clean up thousands of acres, starting with 970 acres on the town's southeast flank, where fire would likely hit first. Almost a decade later, only a fraction of the work was done. The Caldor Fire wiped out Grizzly Flats exactly as the Forest Service had predicted.

Residents aren't the only ones who have tried to get answers from the Forest Service. 60 Minutes asked the federal agency repeatedly for documents, a comment, and to have the taxpayer-funded service explain what happened in Grizzly Flats.

Last week, the Forest Service emailed us that it plans to dramatically increase the scale of forest health projects like the Trestle Project and has launched a 10-year plan, starting with communities at immediate threat.

The 10-year plan is no solace for the residents of Grizzly Flats who told 60 Minutes that any trust they had in the Forest Service has been shattered.

"A 40-acre fire," resident Candance Tyler said, "you can't put that out in a canyon? And don't get me wrong, I lived here my whole life. I know that's a steep treacherous canyon, but you're still telling me that you don't have the ability and the equipment to put it out? They didn't do nothing. In our opinion, they did nothing to put this fire out."

Last year, Caldor was one of three devastating fires in the region that started on federal land and burned more than a million acres.