Zendaya seems way too young to have been in the public eye for 10 years, but it really doesn’t feel long ago that she was one of those real-life Disney princesses known for shows such as “Shake It Up” and “K.C. Undercover.”

Now, at the ripe old age of 24, she’s the youngest performer to win the Emmy as lead actress in a drama, as recovering addict Rue Bennett in HBO’s “Euphoria.”

Surrounded by family for her excited acceptance speech at the virtual 72nd Emmy Awards, she said, “I know this feels like a really really weird time to be celebrating. I just want to say that there is hope in the young people out there. I know that our TV show doesn’t always feel like a great example of that, but there is hope in the young people.”

Having won over an impressive field of veteran actresses including Sandra Oh (12 nominations) and Jodie Comer (the reigning champ) of “Killing Eve”; Oscar winner Olivia Colman of “The Crown,” Jennifer Aniston (7 nominations, one win) of “The Morning Show”; and four-time winner Laura Linney of “Ozark.”

“Every single woman in that category, I obviously admire immensely and their work and everything they continue to do,” she told those in the virtual pressroom when asked about the display of support her fellow nominees gave her when she won. “Just to be mentioned within a category at all was something, and then just to have their support, to have them smile and wave at me and stuff like that, meant a lot to me. That support really filled my heart, I guess you could say.”

"I got through it without letting it take over completely,” she added. “But it’s obviously a very emotional moment. Yeah, I still can’t believe it myself. Pretty crazy.”

Her character in “Euphoria” is a far cry from her Disney past, and even from her more recent, high-profile projects — the acrobat in a forbidden love affair in the musical “The Greatest Showman” and the completely reimagined “MJ” character in the Marvel Cinematic Universe “Spider-Man”. Rue has extreme mood swings and self-medicates; she’s in trouble and it’s not clear she’ll find her way. But in Zendaya’s hands she remains sympathetic. 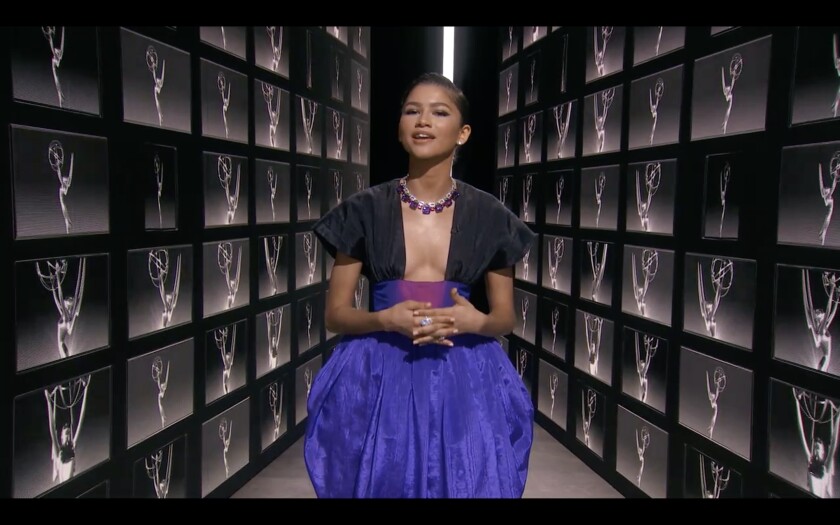 Zendaya at the 72nd Emmy Awards

“What’s so special to me about her is that she is a full, whole human being and she’s layered and she’s complicated,” the actress said . “I think, as the show goes on, we’re also able to empathize with addiction and what that looks like, and what that does to a family and be able to understand and still root for Rue. We understand what’s going on in her head. We understand how she views the world and how she views everything that happens to her.

“For me, I’ve always been very grateful for all the people who feel that they connect to Rue. Or feel that, through the show, they’ve been able to put or attach words, or find themselves within a scene or a moment where they otherwise felt alone or maybe they were the only person dealing with or having those thoughts … to have that clarity or to have that feeling that there [are] other people that feel what I feel, I think is huge and it’s very important.”

After seeing the joy in the room when her family shared her win with her, Zendaya was asked how it was to “experience so much joy in a year filled with so much pain.”

“That’s a big question,” she said. “I’m just grateful for moments like this, moments when we can have joy and we can wrap our arms around our loved ones and tell each other we love each other and we’re proud of each other. I think it’s moments like this we have to all hold onto and cherish. I’m just grateful my whole family — who are all standing off to the side and trying to be quiet,” she said, pointing at them off-camera and laughing "— is all here to celebrate with me and be here. I felt this wrapping of love around me as I was sitting here.

“I’m just trying to take it all in and be grateful for all the we do have of joy and happiness.”

Hans-Dieter flick: I Hope Alaba will sign a contract with Bayern. Our club is one of the best in the world
Diego Maradona: Messi gave Barca everything, brought them to the top. He was not treated the way he deserved
Federico Chiesa: I hope to leave my mark in Juve. We will achieve great results
The Coach Of Benfica: I don't want us to look like the current Barcelona, it has nothing
Guardiola on returning to Barca: I'm happy at Manchester City. I hope to stay here
Fabinho will not play with West ham due to injury
Ronald Koeman: Maradona was the best in his time. Now the best Messi
Source https://www.latimes.com/entertainment-arts/tv/story/2020-09-20/emmys-2020-zendaya-euphoria-hbo-win-reaction

Study: Trump rallies may be responsible for an estimated 700 Covid-19 deaths

5 Tips for Entrepreneurs to Better Serve Their Potential Customers

Tomoyuki Sugano, Japan’s top pitcher, could be headed to MLB

If you're looking for someone to blame for changing the clocks, look to Congress

More than 90 million have cast general election ballots so far

As Trump downplays Covid-19, the US sets a world record for cases

The President’s Taxes: A Reader’s Guide

Trump and Biden blanket the Midwest on final weekend

Win or lose, with Trump, prepare for the unimaginable after the election

From the 60 Minutes archive: Sean Connery

Walmart Walks Back Decision To Remove Firearms From Store Displays

The Road To 270: Biden Has Options, Trump Walks A Narrower Path

Are You Watching Your State Lawmaker Elections? Here's Why You Should

World No. 2 Simona Halep is recovering after testing positive for Covid-19

AP Explains: Why France incites such anger in Muslim world

‘A Slow Killer’: Nursing Home Residents Wither in Isolation Forced by the Virus

Don't miss the most important news of the week! Take a look at Emprendenews

Gov. Andrew Cuomo responds to Chelsea Handler’s crush on him

Police Reform Is on the Ballot

Is France Fueling Muslim Terrorism by Trying to Prevent It?

Jackie Lacey vs. George Gascón: All you need to know about L.A County district attorney's race

Rublev beats Anderson in Vienna for his 5th final in 2020

Sean Connery dies at 90: These fascinating facts about former James Bond star will leave you teary-eyed

Sean Connery, legendary actor known for his role as James Bond, dies at 90

“Only Did What Poetry Told Us To Do:” A Portrait of Sylvia Plath On Honeymoon With Ted Hughes

Daniel Craig Pays Tribute to Sean Connery: ‘One of the True Greats of Cinema’

Dramatic Rescues After Major Earthquake Kills at Least 28 in Turkey

Indians decline options on closer Hand, 1B Santana for 2021

In California, voters must choose between cash bail and algorithms

Black Lives Matter faces test of its influence in election

Inside the nine swing states the 2020 presidential election hinges on

When Parents Lose Their Jobs, Their Children Also Suffer. But Sometimes There’s a Consolation.

Roger Stone to campaign for Doug Collins in Georgia on Monday

Someone told me I'd never model because I'm disabled. I proved them wrong at NY Fashion Week

When Will ‘Rick and Morty’ Season 4 Be on Hulu and HBO Max?

Column: The pandemic and the economy top voter concerns, but there's a bigger issue

The problem of selling Quibi: How marketing exposed division at the streamer

The Benefits of Canvassing on Hinge

Could There Be a Halloweentown Reboot? Phillip Van Dyke Tells All

Did This Building Grow a Beard? Nope. Those Are Legs.

Fact check: 7 kinds of dishonesty to expect at a late-campaign Trump rally