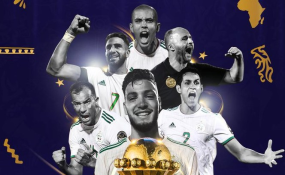 
Algeria crowned champions of Africa for the second time.

The Algerian national team emerged African champions on Friday after defeating Senegal in the final match.

A first minute deflected goal was all the North Africans needed to secure their their second Nations Cup trophy.

The first time Algeria won the African Nations Cup was in 1990 when they hosted.

Senegal with the defeat failed to win the AFCON having played two final matches, the first in 2002.

Nigeria on Wednesday won the third-place match against Tunisia.

Tiago put his house in Munich up for sale. Liverpool was Interested in him
Glushakov before the game with Spartak: I have no problems with the fans
Olivier Giroud: I'm Glad that my goal helped Chelsea win
Hulk: the Contract with Shanghai ends in December. I don't want to play in China anymore
Inter will extend their contracts with Handanovic and D'ambrosio until 2022
Pep Guardiola: I would have stayed at Manchester City and in League 2
Manchester United is ready to sell Alexis, Lingard, Smalling, Dalot, Jones and Rojo
Source https://allafrica.com/stories/201907200090.html

News24.com | OPINION | A Covid-19 experience: Losing someone on the front line

Lockdown got you down? How to access public mental health services

Wearing masks, fines imposed and how it affects you

News24.com | ANALYSIS | SAA may see a rainbow, but the DPE still needs a pot of gold

Hold off buying a house until at least 2021, says analyst as prices plummet

MEC cracks down on officials implicated in R19.6m theft

Now we know, it’s all our fault

ELECTIONS: The 2021 municipal poll pushes on regardless of Covid-19, says IEC

OP-ED: Covid-19 and the role of the judiciary: Contradictions and confusion

OPINIONISTA: Meritocracy or cadre deployment? How South Africa should appoint its state leaders

CORONAVIRUS: France to extend a helping hand to South Africa as it enters the Covid-19 storm

MAVERICK CITIZEN KWAZULU-NATAL: Receiving food parcels: ‘It depends on who you know’

MAVERICK CITIZEN: Covid-19 and the power of civil society: What we can learn from the HIV/AIDS epidemic

OPINIONISTA: The critical role after-school activities play in transforming education during and beyond Covid-19

OPINIONISTA: Put down the hammer: Government must urgently lower VAT to save the economy

OPINIONISTA: Training for the pandemic economy

OP-ED: Covid-19: Clinical trials steam ahead in the race to find a vaccine

Maverick Life: The future of the workplace – the office is not dead just yet

SPOTLIGHT: Covid-19: Western Cape and Gauteng prepare for the peak

SPOTLIGHT: Being young and living with HIV during Covid-19

Pasalic hits hat-trick as Atalanta go second in Serie A

Court action will be a last resort, says Sadtu on opposition to reopening of schools

News24.com | Govt hits back at Sadtu's call for schools to stay closed amid Covid-19 surge

IEC reveals stance on holding municipal, provincial and national elections at once

News24.com | Mixed reactions from political parties over Sadtu's call for schools to close

Delft's Fredie Blom, 116, up and about again after breathing scare

News24.com | Tito Mboweni | We cannot spend our way out of low growth

Fined for breaking lockdown rules? You may now have a criminal record

Gwede Mantashe and his wife test positive for coronavirus

Technology Has Become Most Crowded Trade Ever, The ‘Longest Long Of All-Time,’ According To A BofA Survey

Here's what we know about government's proposed basic income grant

Woods cautious about return ahead of Memorial

Business Maverick: IPOs Boom With Lasting Pandemic Effect on How Deals Get Done

Wine exporter faces problem of plenty due to lockdown disruptions

News24.com | Schools shutdown: We're not calling for learning to stop, we want it to happen outside classrooms - Sadtu

Mpumalanga man appears for allegedly setting his girlfriend on fire