Business Maverick: Emerging Markets May Be Heading for a Covid Fiscal Crisis 2.0

Central banks cut interest rates and governments whacked up spending as cases of the coronavirus exploded and lock-downs slashed investment and consumer demand. While the measures have stoked a recovery in risk appetite, they may have boxed policymakers and government officials into a corner.

Eventually, “markets will turn and then look at the debt-to-GDP and say, ‘What are you going to do about this?” said Eric Baurmeister, head of emerging-market debt at Morgan Stanley Investment Management in New York. “‘Now that we’re through the worst of it, how are you going to pay this back?’”

With little room left for further monetary stimulus, developing nations may be left in a Catch-22 of needing to spend more to revive growth, but lacking the resources to do so without digging a deeper hole of debt. Interest rates may even need to rise to defend national currencies as confidence ebbs away, undermining growth and sending asset prices lower. At the same time, the mounting economic woes could stoke political tensions. 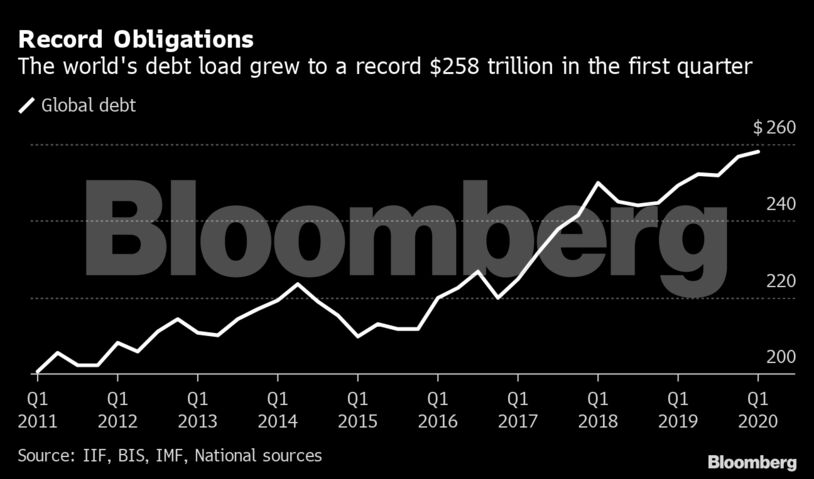 Global debt soared to $258 trillion in the first quarter, or a record 331% of the world’s gross domestic product, according to the Institute of International Finance. For emerging markets, debt ratios rose by a record to 230% of GDP. About $3.7 trillion of emerging-market debt will come due through end-2020, with foreign currency-denominated debt accounting for nearly 17% of the total, IIF economists Emre Tiftik and Khadija Mahmood wrote.

Brazil posted the worst primary deficit on record in June and the debt burden is expected to reach 98% of GDP by year-end, according to the Economy Ministry, up from 76% last year. Colombia’s government forecasts its debt will rise to 65%-66% of GDP from 50% over the same period.

Temporary government spending programs may turn permanent and officials could start relying on easy monetary policy to fund fiscal deficits, according to David Hauner, a strategist at Bank of America in London.

A “Turkey scenario,” in which loose monetary policy stokes both growth and high inflation, weighing on the currency, may become a greater risk in other emerging nations, especially if their reserves dwindle and debt levels rise, Hauner said.

“Manifold fiscal problems have predated Covid, and the post-Covid world is likely to be fiscally challenging with political demands for more social protection and health care spending,” he wrote in a note.

Yet cutting spending or raising corporate taxes brings its own risks. Such measures would weigh on growth, said Pedro Martins Junior, chief Latam equity strategist at JPMorgan Chase & Co. in Sao Paulo. While that may not materialize until 2021, it could become a headwind to company earnings, he wrote.

Pressure could also mount in the political realm if economies continue to lag, leading to a surge in populism, said Cathy Hepworth, head of emerging market debt at PGIM Fixed Income, which has $868 billion in assets under management.

“To me the biggest risk is if we don’t get the recovery in growth that we’re expecting,” she said. “If they can’t begin to grow, then that is going to limit the ability to continue to prop up these economies. The question is does that mean there is more pressure for populism?”

Mourinho about alli: I would have understood if I didn't have enough motivation, but it turned out exactly the opposite. Respect him
Ashraf Hakimi: Inter will compete for the scudetto, we have a great team
Rui Costa: Ronaldo will be discussed in 300 years
Everton offered 20+6 million pounds for Norwich defender Godfrey
Olas about AUAR: Three major clubs are Interested. Talks are difficult
Goretzka due to back problems will miss the match with Borussia in the German super Cup
Zinchenko will miss at least three weeks due to injury
Source https://www.dailymaverick.co.za/article/2020-08-04-emerging-markets-may-be-heading-for-a-covid-fiscal-crisis-2-0/

PETER BRUCE: Get set to steel ourselves for more pain

Options To Keep Your Equity: 6 Startup And E-Commerce Financing Alternatives To Venture Capital

Humans of Covid-19: Free State doctor: ‘This pandemic has changed everything’

News24.com | SA's trade surplus widens, but it could be thwarted by renewed lockdown restrictions

Here's what you need to know about international travel under lockdown

ANC expected to pay back R105,000 for trip to Zimbabwe on air force jet

Atlanta Police Officer Quits Over Gentrification Bomb Dropped On Black Residents: It Was ‘A Mafia System’

News24.com | International students wishing to return to SA to be subjected to Covid-19 testing

New SAPS Bill will boost fight against corruption in police

Net closing on cabinet ministers and other Sodi beneficiaries

Banks prepare for market risks due to potential US election chaos

MAGA Influencer KingFace Passes Away At 38, Was Reportedly In A Coma For Months

Northern Cape mayor and councillors must be investigated: public protector

US wants $4.2m that Edward Snowden made from his memoir

UK, US and French tourists will not be allowed into SA

Nadal breezes into third round as injury stymies Serena

Kolisi and Am to lead in Springbok Showdown

ANALYSIS: How social security could make life better in SA after COVID-19

Last Year They Created A Black Film Festival For San Antonio, This Year SABIFF Will Be Available To The World

News24.com | CT City salutes Pitso Mosimane on 'great rivalries over the years' ahead of Egypt move