The DA’s Western Cape leader, Bonginkosi Madikizela, does not hold a BCom in Human Resource Management – despite claiming this in his official biography. The DA has admitted it never vetted his qualifications.

When former Western Cape premier Helen Zille introduced the members of her first Cabinet in 2009, she stated that her Housing MEC, Bonginkosi Madikizela, “has obtained a Bachelor of Commerce degree in Human Resource Management”.

Eleven years later, Madikizela is now the leader of the DA in the Western Cape, and the claim that he has a BCom degree has been repeatedly and publicly made. The claim is also contained in Madikizela’s official biography on the Western Cape government website. On Monday, Madikizela told Daily Maverick’s Rebecca Davis over the phone that he had received the degree from Unisa. 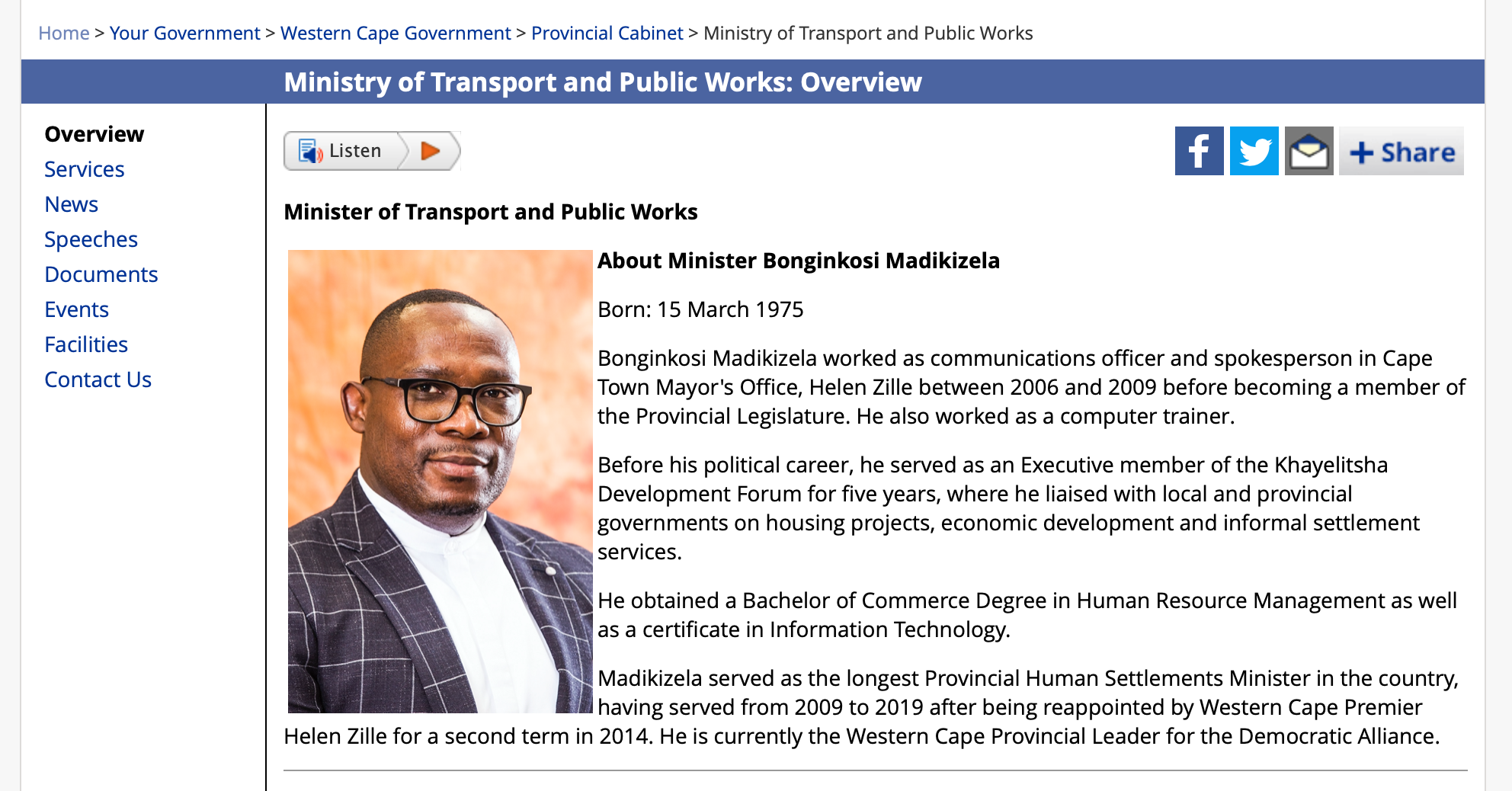 The conversation with Madikizela came after several weeks of unsuccessfully trying to obtain a copy of his CV. Following a tip-off that Madikizela may have falsified his qualifications, Daily Maverick journalists had asked his office, his private secretary and his mayoral campaign manager on five occasions for his CV.

After one such inquiry, Madikizela phoned Daily Maverick’s Victoria O’Regan to demand why she wanted to see his CV. Madikizela directed O’Regan to the biography on the Western Cape government website.

Madikizela’s staff said that they did not have a copy of his CV and had no information about his qualifications. The secretary of the Western Cape provincial legislature, Romeo Adams, told Daily Maverick that he could not supply a copy of Madikizela’s CV as the information was not on record.

After further persistence, Madikizela told Davis in a phone call on Monday that he obtained his BCom from Unisa in 1999 and had subsequently also earned an IT diploma from the National Institute of Information Technology, which we presume is this Indian-based organisation.

Hours later, in a startling turnaround, Madikizela messaged to say: “I’ve noticed on my bio the (unfinished) is not on. I didn’t complete my BCom degree, I thought I should clarify that.”

An hour later, he messaged again: “My original CV clearly indicated (unfinished) because I didn’t complete my degree. I realized that on my bio that is not clarified”.

The idea that Madikizela was unaware that since 2009 it has been on public record that he had earned a BCom is implausible.

Daily Maverick asked DA Federal Council leader Zille why she had publicly introduced Madikizela as holding a BCom in 2009, when this was not true.

Zille replied that she had relayed the information Madikizela had given her at the time.

“This happened 11 years ago. When my office prepared a statement on the Cabinet choices, we used the CVs received from the candidates. We accepted at face value what they told us.”

Asked by Daily Maverick how Madikizela’s claim to have obtained a BCom could have survived party vetting, Zille replied:

“At that stage the verification of qualifications was not a routine matter, as it is today.”

This raises the question of how many within the DA may have inflated their CVs without consequences to date.

Since President Cyril Ramaphosa signed the amended National Qualifications Framework Act into law in 2019, it has been a criminal offence to lie about your credentials.

National DA spokesperson Siviwe Gwarube explained to Daily Maverick that during Madikizela’s current application process to become Cape Town mayor, any problems with his qualifications would have been unlikely to be flagged either.

Gwarube said that because a degree is not one of the criteria for mayoral candidates, the party’s vetting panel “would not necessarily have gone further into the post-matric qualifications of candidates”.

Indeed, the irony of Madikizela’s apparent deception is that he did not require any qualification above matric for any of the DA posts he has held, making the claim to hold a BCom seemingly unnecessary.

As of Tuesday evening, there was no indication from the DA that the party intended to investigate the matter or take any action against Madikizela, despite having attention drawn to the issue by Daily Maverick.

This is in stark contrast to the DA’s approach to similar qualifications scandals involving members of the ANC and government.

When ANC veteran Pallo Jordan was exposed in 2014 as not having the doctorate he claimed, erstwhile DA Chief Whip in Parliament John Steenhuisen said: “Given the current controversy surrounding Jordan, his resignation is in the best interests of Parliament, his party and himself.”

Steenhuisen added that the DA “cannot condone Jordan’s dishonesty with regards to his academic qualifications”.

In 2015, when it was revealed that South Africa’s ambassador to Japan, Mohau Pheko,  did not have the degree she claimed, the DA called for her “immediate recalling and suspension”, saying that “nothing less than a full parliamentary inquiry into this international blunder is needed”.

In both these instances, neither Pheko nor Jordan actually required the degrees they lied about in order to win their posts, making their situations analogous to Madikizela’s.

If the DA continues to take no action against Madikizela, questions are bound to be asked about why his treatment appears so different to those of others within the party accused of similar offences. When the then Tshwane mayor Solly Msimanga’s chief of staff, Marietha Aucamp, was revealed to have claimed a BTech degree she did not actually possess in 2018, Aucamp was placed on special leave pending an investigation and subsequently asked to resign.

This was despite the fact that Aucamp, too, did not actually require a BTech for her position, with the City of Tshwane clarifying:

“While it’s advantageous for the candidate to be in possession of the required qualification, it doesn’t preclude a candidate in the political office to be considered for the position without having the relevant qualification, as what is required is experience and grasp of local government.”

The revelation about Madikizela comes in the same week that the DA released a statement expressing alarm about the fact that “nearly 35% of senior managers employed by national and provincial departments do not have the required qualifications and credentials for the positions they currently occupy”. DM

Substation vandalism plunges parts of Soweto in the dark