Silindokuhle Mavuso, a PhD candidate at the School of Geosciences, University of the Witwatersrand (left), and Ashley Hammond, assistant curator in the American Museum of Natural History’s Division of Anthropology and the lead author of the new study, at the East Turkana site in Kenya. (Photo: A Hammond / AMNH)

A multinational team of scientists, using methods that cold-case detectives would recognise, has added more evidence to the hypothesis that Homo erectus did have African roots.

Homo erectus was our wandering ancient ancestor who ranged across Africa and Europe, and into Asia.

But for decades palaeoanthropologists have argued over where the original home of Homo erectus was.

Was this hominin, with its human-like gait and flat face, from Africa, or did it emerge from Asia?

Now a multinational team of scientists, using methods that cold-case detectives would recognise, has added more evidence to the hypothesis that Homo erectus did have African roots.

And the scientists did this by revisiting a nearly 50-year-old dig site to verify the age and origin of one of the oldest specimens of Homo erectus ever found.

“It was a lot of detective work, as well as a big geoscience effort, to get very accurate data,” says Silindokuhle Mavuso, a PhD candidate at the School of Geosciences, University of the Witwatersrand. Mavuso was part of the team.

The fossilised skull fragment in question is known as KNM-ER 2598. It was discovered in 1974 at the East Turkana site in Kenya and was dated to 1.9 million years ago.

But soon after the discovery some researchers argued that the skull had come from a younger deposit.

To prove that KNM-ER 2598 was in fact that old, scientists from South Africa, Ethiopia, Kenya, the US and Brazil decided to revisit and conduct a holistic study of the site. First, they had to pinpoint the exact location of the find.

“We had to go through lots of archives looking at data that had been published as well as not published. We also found people who worked on the site, so we could clarify things,” explains Mavuso. 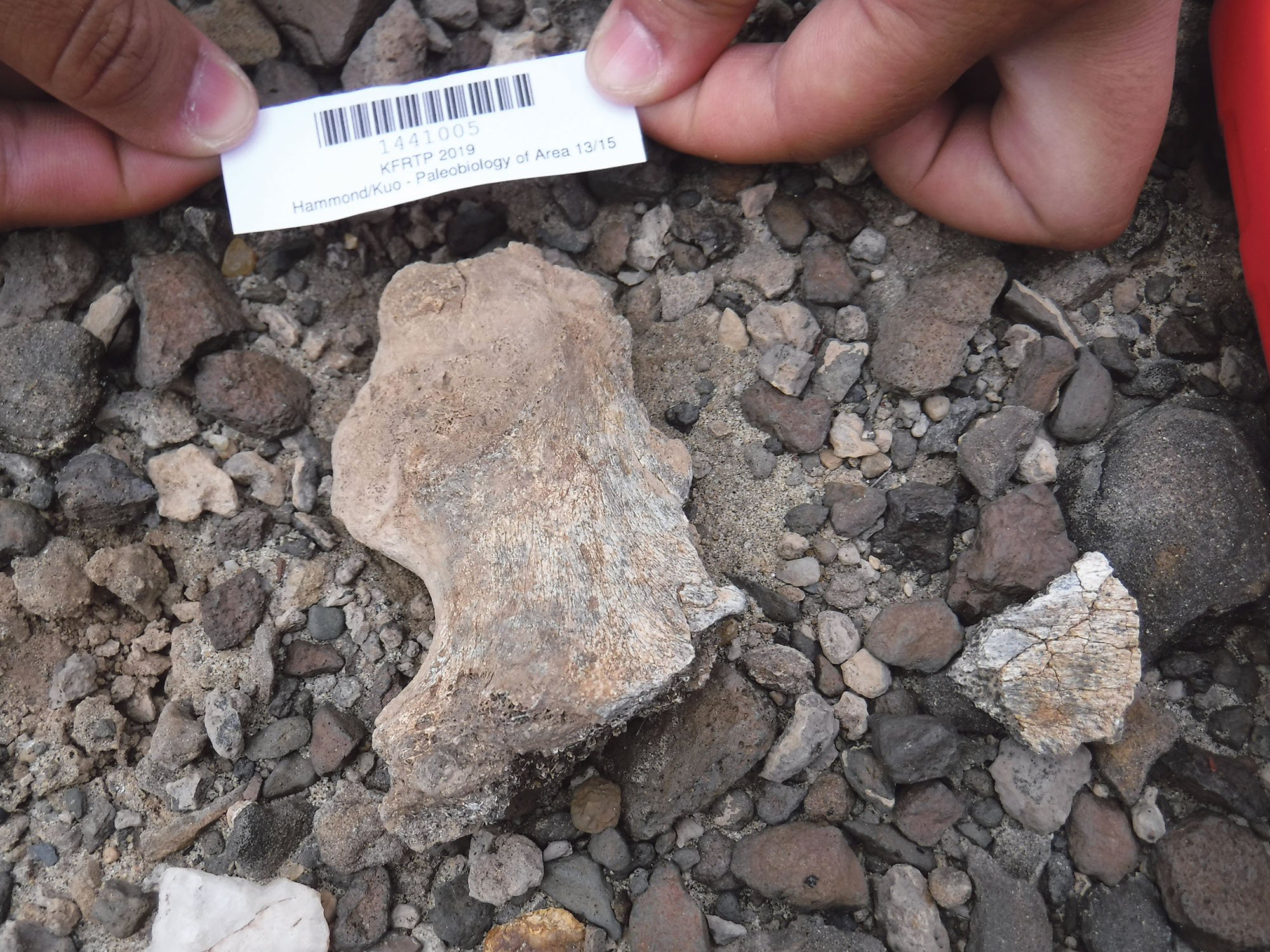 One of two new hominin specimens, a partial pelvis, found at the East Turkana site in Kenya. (Photo: A Hammond / AMNH)

The team also used satellite and aerial imagery to recreate the scene.

The hominin the scientists were studying is a close human relative that left stone tools scattered across the globe, probably used fire and, some believe, might have had limited seafaring abilities.

Crossing bodies of water would explain how this ancestor reached islands in Indonesia.

“Homo erectus is the first hominin that we know about that has a body plan more like our own and seemed to be on its way to being more human-like,” said Ashley Hammond, in a statement. She is an assistant curator in the American Museum of Natural History’s Division of Anthropology and the lead author of the new study. “It had longer lower limbs than upper limbs, a torso shaped more like ours, a larger cranial capacity than earlier hominins, and is associated with a tool industry – it’s a faster, smarter hominin than Australopithecus and earliest Homo.”

But its wandering habits mean that the earliest remains of Homo erectus are found in both Africa and Asia.

Until recently, the oldest verified Homo erectus fossil was found in Dmanisi, Georgia, and was dated to 1.8 million years ago.

That was until a specimen was found in South Africa, at the Drimolen site in the Cradle of Humankind.

This was dated to 2.04 million years old. But the debate over where Homo erectus came from still raged.

Mavuso helped with dating the site and detailing its depositional history. He knew the area well, having spent two years working there.

He was surprised to make an unusual discovery when he examined some sandstone samples from the area under the microscope.

“To our surprise we saw sponges. I tried to find out what freshwater sponges they were, as they are very rare,” says Mavuso. “But it shows that the site was probably near some body of water.”

To find out more about the environment in which this Homo erectus lived, scientists collected the fossilised teeth of other mammals found in the area.

From the enamel of these teeth, scientists analysed isotope data.

“Our new carbon isotope data from fossil enamel [tells] us that the mammals found in association with the Homo fossils in the area were all grazing on grasses,” said Kevin Uno, a palaeoecologist at Columbia University’s Lamont-Doherty Earth Observatory, in a statement. “The enamel oxygen isotope data [suggests] it was a relatively arid habitat based on comparisons [with] other enamel data from this area.”

The scientists were to make a remarkable find, just 50m from where they believe KNM-ER 2598 was located half a century ago.

They discovered two new Homo erectus specimens – a partial pelvis and a foot bone. It is even possible that these bones might have belonged to KNM-ER 2598.

After gathering all the evidence the scientists were able to conclude that KNM-ER 2598 had come from a different area than initially reported.

But there was no evidence that the skull might have washed into a younger deposit, so the skull’s original age stood.

The weight of evidence, when included with the evidence related to the Drimolen discovery, means that the pendulum has once again swung in favour of Homo erectus having originated in Africa.

Mavuso says the team aims to look at other older sites and see whether, by using new techniques and methods, they might be able to learn more about the fossils found in them.

“All I can say is that this was a really beautiful group effort, with a fun team, and the more stuff we did, the more questions we had,” said Mavuso. DM168