Unable to sell its brews during the first lockdown, the Woodstock Brewery in Cape Town switched production from craft beer to nutritious soup to keep a lid on the Mother City’s growing hunger problem. More than 18 months after the first hard lockdown though, it’s time for the brewery to resume full operation, while the Mother Soup Project moves into new premises that will enable it to ramp up production and feed more people more efficiently.

The Mother Soup Project has produced more than five million meals (an average of about 15,000 meals a day), which cost less than R2 a meal since April 2020.

Next month, the new Mother City Kitchen opens near the Cape Town Market in Epping — within reach of the source of the fresh produce and, critically, closer to where the greatest need lies, on the Cape Flats — with a customised kitchen, a much-improved distribution network and a wider variety of menu options.

The production facility will be easier to expand and operate, serving as a blueprint for soup kitchens elsewhere. 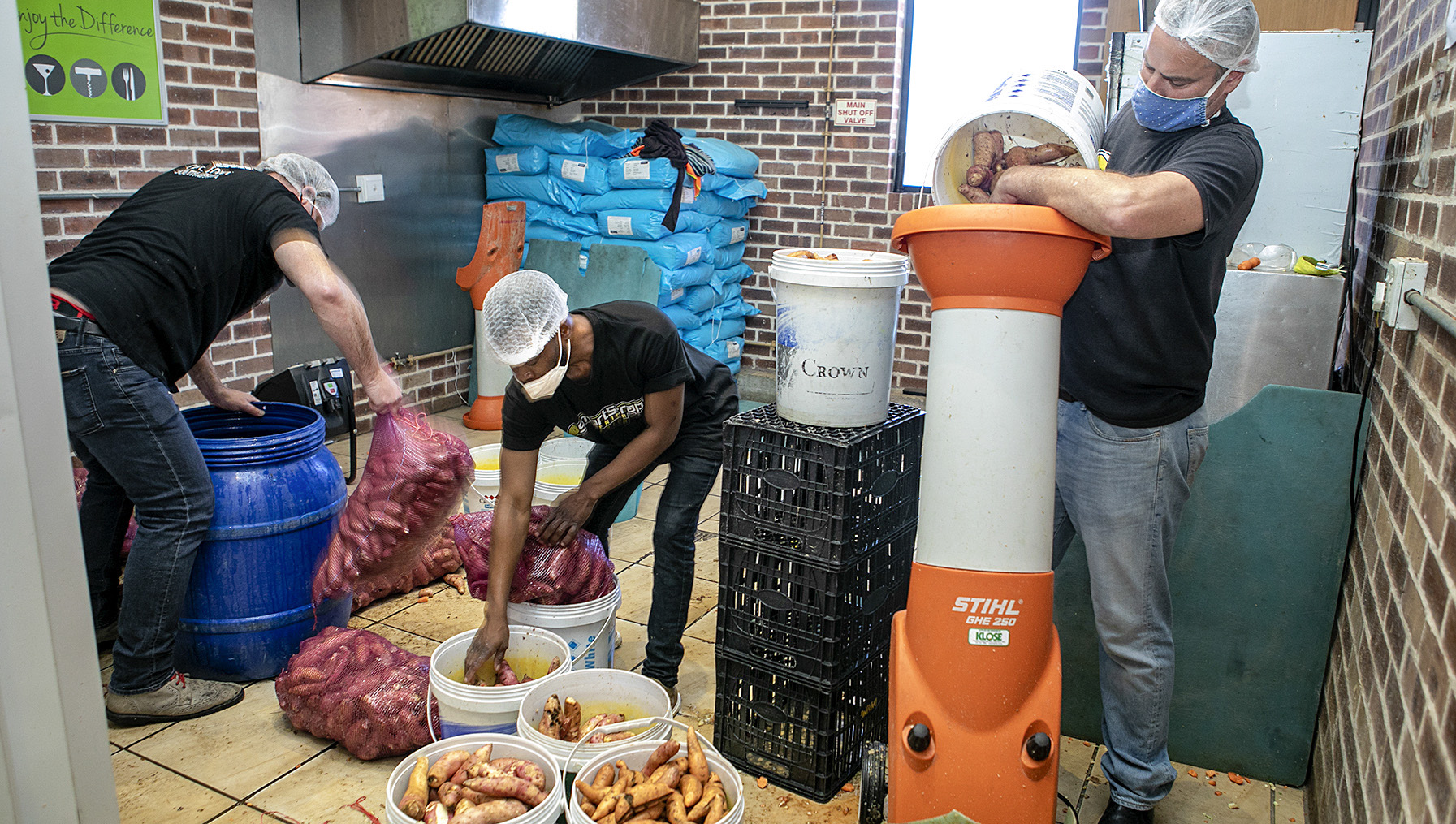 Central to the kitchen’s improved efficiency is the creation of a Covid-free working zone, enabled by a donation of UVC lighting technology. Ultraviolet-C light has been used for decades in medical settings but is known to be unsafe for human skin and eyes: This proprietary tech, developed by Columbia University, provides continuous and safe disinfection in a variety of settings, explained Michael Eads. Eads, a Mother Soup board member, said Covid-19 outbreaks are a threat to their soup production.

“We’ve had some issues with staff contracting Covid and then everyone has to isolate, so we didn’t have a stable ability to predict how much soup we can make at any given time. The Lumenizer disables pathogens in the air and on surfaces so that people who are in the production line, making soup, can now know and feel like they’ve got another layer of safety and protection for them.”

At the start of the initial lockdown, more than three million South Africans lost their jobs, with 23% of South African households reporting hunger. In April 2021, an Ipsos study conducted for the Centre for Social Development in Africa based at the University of Johannesburg found almost half (46%) of adult South Africans admitted to going hungry during the pandemic.

Mother Soup, which survives on donations from the private sector, partnered with a charity, the Great Commission United (GCU), when it became clear that hunger levels were destined to increase, explained Woodstock Brewery owner André Viljoen.

“In the past 18 months, we and our donors have worked together to increase both the volume and distribution footprint for soup.”

It’s been a tough learning curve, he said, but they could not have done it without donor support and generous pricing and support from farmers.

“Mother Soup is more than a bowl of soup; it’s a meal. 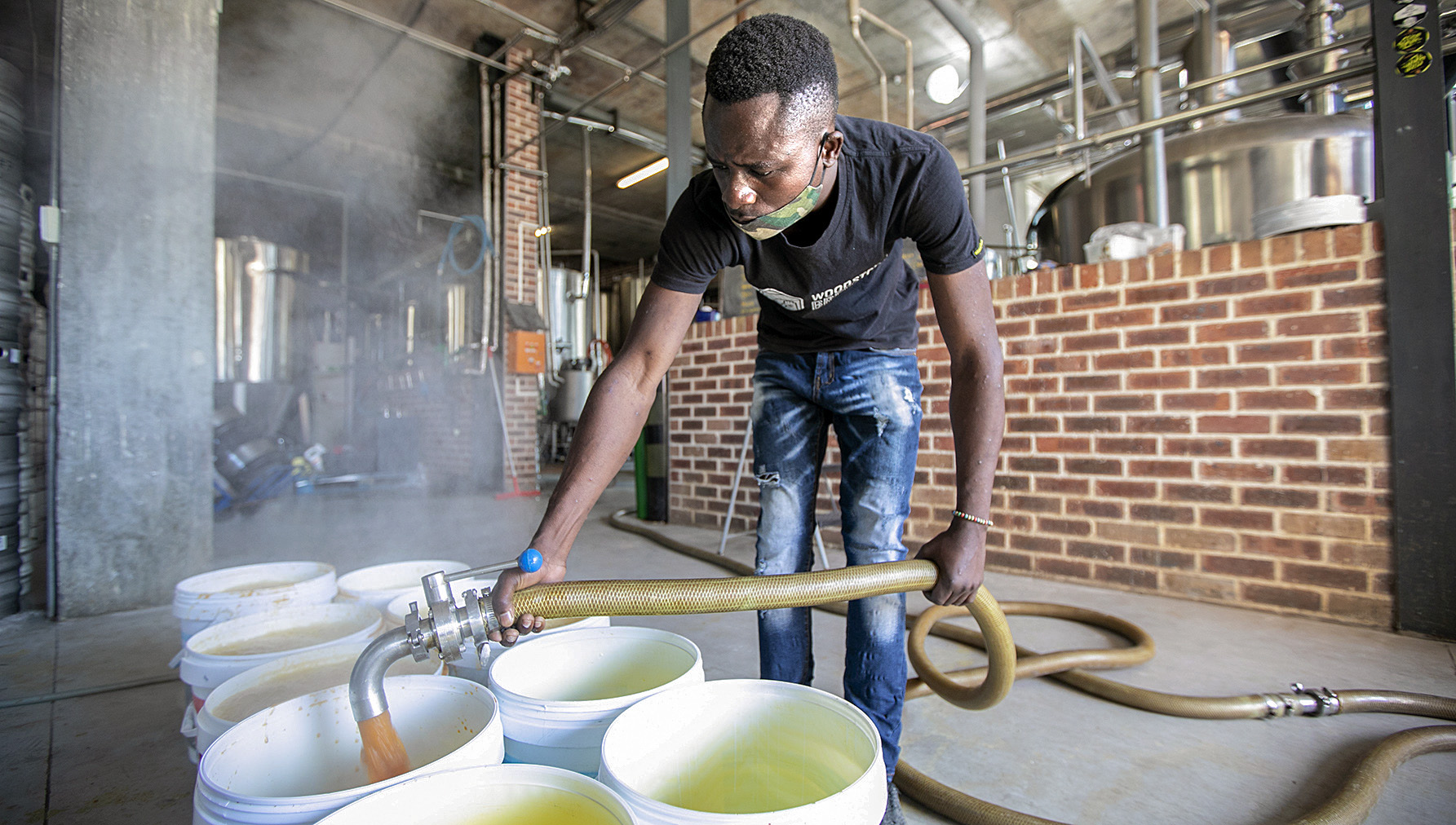 Our recipes are designed by nutritionists and chefs, with added protein and healthy fats to ensure that it is a tasty and healthy balanced meal.”

They’ve come far since the early days of lockdown: The soup project grew from dozens of community-driven initiatives, when do-gooders would prepare soup at home to donate where they saw a need. That’s not ideal, nor sustainable, says film industry photographer Steph Venter.

At the forefront of the Mother Soup project, Venter said he made soup for a while in his kitchen, but realised that while there was no lack of desire to help, getting food to the hungry was always going to be tricky. So he hitched a trailer to his VW Citi Golf and set out to drive deep into communities, distributing soup, bread, fruit and whatever else he could find.

The situation was more desperate than he imagined, Venter said, as many recipients hadn’t eaten in weeks and there was no end to the need.

Venter had the distribution experience in poor communities and Viljoen had the production facility, so when they crossed paths, Venter started helping with Mother Soup’s distribution.

At first, charity organisations would collect from the brewery, but delivering soup was vital so they could keep an eye on where it was going, which meant they were delivering “like maniacs”, Venter says. “We were literally delivering [food] like maniacs, which inspired the name of our charity, Food Maniacs 247. You know, in one day, collectively between Woodstock Breweries and myself, we distributed up to 9,000 meals.”

Three months into this frenzied delivery, Venter, a committed recycler, turned to the beneficiaries, asking them to pay for their soup in PET plastic bottles. “People would come to the soup depots to just bring a big plastic bottle, put it in the bag and collect the soup, or a meal. And it started kicking off, so in a couple of months we had collected over four tons of plastic. It made people feel good about themselves, they felt worthy because they weren’t just standing there for a handout — they were doing something for the food they were getting. We’re still doing it; we’re just waiting for the new depot to open, and then we are hoping to take it on to a much bigger scale.”

Adam Kane-Smith, finance and funding manager at the Heideveld-based charity GCU, said getting the soup to beneficiaries has been critical. “Haley [Cottle] and Steph had to identify who the needy organisations are, create contacts with them, and then we [GCU] had to audit it because what we found is in some cases people would take the bread and the soup and sell it.” 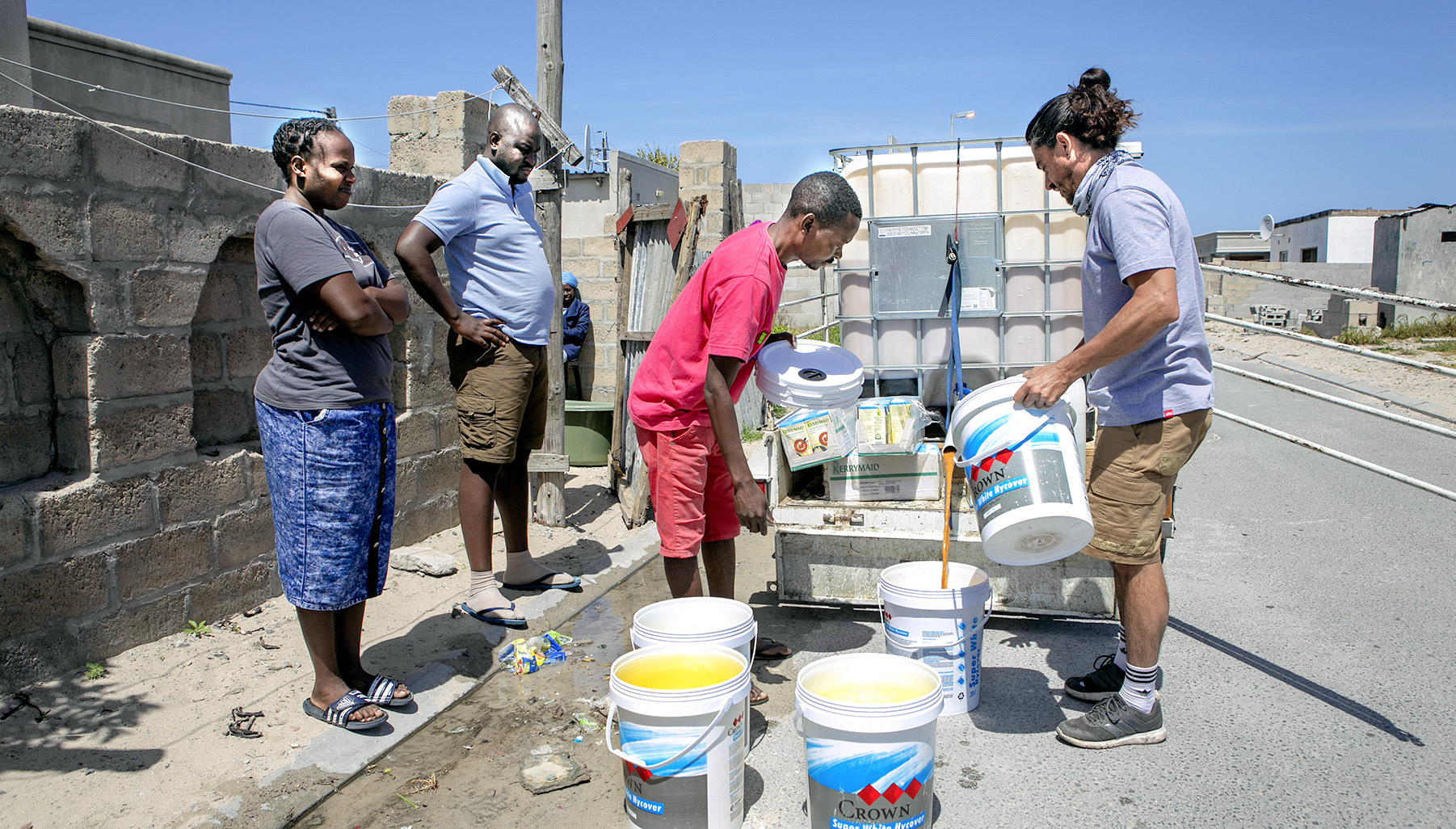 Covid isn’t the cause of the hunger — the hunger is there all the time, he said. “The challenge we’ve got as an organisation is to remind people that hunger exists even if Covid is fading away.

“When UCT’s library burnt, everybody sprung into action to deliver food to the firemen and they felt so good about giving. But just hunger doesn’t have a plume of smoke associated with it. It’s ongoing. Nobody is reminding us of the hungry; nobody sees it because the hungry are on the outskirts of society so you don’t realise [the extent of the problem].”

Kane-Smith said this great need has inspired them to continue operating. GCU has received some funding from a philanthropic institution to establish the factory.

“The factory is moments away from being ready to go. We’ve used André’s processes and ideas, and we’ve had the engineers come in and produce a cooker, the same size as André’s, but that we hope will be more mechanically sound, because it’s made with the soup in mind, not beer, so it will be able to handle the volume that he had been putting [out on] his machines.”

GCU is seeking funding assistance with factory fit-out costs as well as ongoing operational costs. Operations will cost R300,000 a month and in return will provide an estimated 250,000 nutritious meals delivered to those who need it most. To get involved, contact [email protected]

News24.com | Lance Klusener to step down as Afghanistan coach

ISMAIL LAGARDIEN: Ethics should trump economism in keeping a country on life support

Watch: Man who was kidnapped in broad daylight in Benoni RESCUED

Ronaldo hits out at journalist for ‘disrespectful lies’

News24.com | Suspect caught in car with suspected loot after cash-in-transit heist in Gqeberha

Deputy Health Minister Dhlomo: We are ready to deal with all the COVID waves

Why Bafana Bafana are not counting on Ghana replay

South Africa: Why South African Political Parties Must Find a Balance Between Rural Versus Metro Support

Africa: One in Eight Children At Risk of Becoming Child Soldiers

Tembisa 10: Here’s what we learnt from Independent Media’s investigation

Bedfordview's electricity to be restored in the next 4-5 days: Eskom

‘Sexy’: Does Boity’s ‘husband’ Rich Mnisi want her back?

‘Why should you keep your job?’: Scopa grills public works on Beitbridge fence saga

Swallows chair David Mogashoa: 'We have not spoken to Gavin Hunt'

They are unscientific & discriminatory: Ramaphosa on travel bans

Mozambique: What Lies Behind the Failure to Find Lasting Peace and True Democracy

Gauteng extends placement deadline for grades 1 and 8 as 121,000 pupils remain in limbo

Zimbabwe: Zimbabwean Farmers Step Into the Future of Farming

MONDLI GUNGUBELE: Full vaccination is the only alternative to lockdowns — there is no other way

Nigeria: Govt Says Twitter Has Accepted All Our Conditions

Dutch had Omicron cases a week before SA announced its discovery