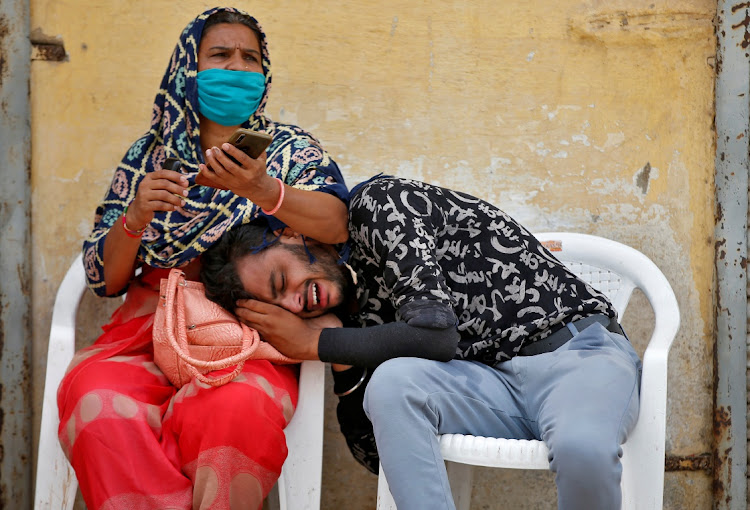 Late on Sunday, the northern state of Uttarakhand said it would impose curfew from Tuesday until May 18, just days after mass religious gatherings held in the state became virus super spreading events.
Image: REUTERS/Amit Dave

Calls grew for India to impose a nationwide lockdown as new coronavirus cases and deaths held close to record highs on Monday, increasing pressure on the government of Prime Minister Narendra Modi.

As many hospitals grapple with an acute shortage of oxygen and beds while morgues and crematoriums overflow, experts have said India's actual figures could be far higher than reported.

The 1.47 million samples tested on Sunday for Covid-19 were this month's lowest yet, data from the state-run Indian Council of Medical Research showed. The figure compared with a daily average of 1.7 million for the first eight days of May.

Many states have imposed strict lockdowns over the past month while others have adopted curbs on movement and shut cinemas, restaurants, pubs and shopping malls.

But pressure is mounting on Modi to announce a nationwide lockdown as he did during the first wave of infections last year.

He is battling criticism for allowing huge gatherings at a religious festival and holding large election rallies during the past two months even as cases surged.

"A failure of governance of epic and historic proportions," Vipin Narang, a political science professor at Massachusetts Institute of Technology (MIT) in the United States, said on Twitter.

"You’ve got to shut down," Fauci said on ABC's "This Week" television show. "I believe several of the Indian states have already done that, but you need to break the chain of transmission. And one of the ways to do that is to shut down."

New Delhi, the capital, entered a fourth week of lockdown, with tougher curbs such as the shutdown of the suburban rail network, while residents scrambled for scarce hospital beds and oxygen supplies.

"This is not the time to be lenient," Delhi chief minister Arvind Kejriwal said on Sunday.

"This phase is so tough, this wave is so dangerous, so many people are dying...the priority at this hour is to save lives," he said in a televised address.

Late on Sunday, the northern state of Uttarakhand said it would impose curfew from Tuesday until May 18, just days after mass religious gatherings held in the state became virus super spreading events.

Shops selling fruits, vegetables and dairy items will stay open for some hours in the morning, while malls, gyms, theatres, bars and liquor shops are among the enterprises that will be shut, the government said.

Under is Interesting for Leipzig, Bayer and Eintracht. Roma estimates the winger at 15 million euros
Vladimir Petkovic: Switzerland will play in front of 30,000 Turkish fans. We will try to turn this to our advantage
Sociedad forward Isak is Interesting for Real Madrid and Man City. The transfer is estimated at 70 million euros
Bale to Italy: We understand that Wales are an outsider, but we will give our all on the field as always
Glick after 1:1 with Spain: For Poland, the Euro is just beginning
Muller-Gozensu after 4-2 with Portugal: No wonder you only ran for 60 minutes. You are playing in Italy
Spain will be in the play-offs, I'm sure. Alba about the Euro

What's missing today is accountability, says Sibongile Mkhabela, one of the leaders of 1976 student protests

The athletes’ road to the Tokyo Olympics is uncertain and arduous

Thousands of school staff to receive jabs in coming weeks

Wayde qualifies for Olympics, Caster running out of time

How ‘wearables’ are becoming game-changers in pro sport

As Iran veers right, ties with Gulf Arabs may hinge on nuclear pact

Thank God I don’t have to pretend to like lingerie any more!

News24.com | Motshekga wants everyone back in the classroom

R3bn to relaunch SAA not a problem for bidders, says Gidon Novick

EU opens up to US citizens, if ‘jabbed’

MARK BARNES: A golden opportunity to be proved in SAA’s ‘golden share’ model

Cash flows in for local and Africa start-ups

Nuclear fusion moves from classroom to reality in UK project

Bubbly with that used bag ma’am?

EDITORIAL | Chaos in forensic labs a betrayal of the vulnerable

My Brilliant Career: Helping firms manage the physical assets they have

How to ... Adopts habits that ensure success

Zuma's 'penniless' architect gets court to delay his trial

The love of fast cars drives this father-daughter relationship

Stop horsing about! Equine and 'ghost' therapy will not cure Zoom fatigue

HILARY JOFFE | Power to the people: now for proof of concept

There's no 'one size fits all' approach to fatherhood, as these diverse dads show

All the thrills of Jozi's high-end property deals

Author Kojo Baffoe: 'My daughter can do anything she decides she wants to do'

REVIEW | 'Tragic Jungle': the tale of a vengeful heart of darkness

News for the parents of mini fashionistas to note

WTF IS GOING ON? | Ex-Nissan boss Carlos Ghosn fled the law in an escape worthy of Houdini

Saldanha drug-bust booty on the block

With the third wave in full swing, doctors fear being overwhelmed

Kaizer Chiefs sound warning to the continent: Khosi have one foot in the Caf Champions League final

News24.com | 3 arrested after 7 sheep found in luggage section of a bus in the Eastern Cape

DM168 POLITRIX: Battle of the Metros (Part Two): An early forecast for the 2021 local government elections

DM168 REFLECTION: Commitment to non-racialism: Progressives must draw a line in the sand on the conduct of Julius Malema

DM168 PIONEERS PROFILE: South African trailblazers prove that youth is not wasted on the young