Once a stormy petrel of South African politics and a senior member of a string of political parties, David Dalling has finally gone to his rest.

He gamely battled ill health for years and died in hospital in Somerset West, aged 80, on Saturday morning.

He played notable roles in two shifts in South African politics, one far more relevant to us today than the other.

To take the latter, as a member of a “reformist” ginger group, fighting from within, Dave helped put the reactionary United Party official opposition out of its dormant misery in the blighted 1970s when apartheid was Boss in more ways than one in South Africa.

This paternalistic party wrote itself out of history with its call for “white leadership with justice”, an unbelievable snub to the majority expecting elementary justice after World War II had seen arch-racist Hitler vanquished. The UP, as government under General Smuts, had at least engaged in that war on the right moral side.

Weakening over the years and fearful of black majority rule, in time the UP just faded away, aptly at a winding-up conference on an ice rink in 1977. This was just as the (white) Nationalists reached the zenith of their power.

The UP reformist group, led by the late Harry Schwarz, had left the party and later managed to link up with principled liberals in a truly progressive party. But it proved to be one of permanent opposition that kept on changing its names, finally becoming the Democratic Alliance of today.

Dave’s inherent liberalism and respect for human dignity, rooted deep in his school days, could come into full play in this new political company. For too long he had endured the stifling atmosphere in the UP. His friends, including myself, felt he should have made the jump much earlier.

Dave’s life journey took him into ever more liberal directions, unlike so many others as they grow older and more conservative.

Dave, too, had more party moves up his sleeve, which in fact saw him leapfrogging over the DA to the ANC.

In 1992 he led a group of five DA (then called Democratic Party) MPs across the floor of Parliament to the ANC. This move strengthened the non-racial hand of Nelson Mandela’s ANC, as it prepared to take over South Africa in an atmosphere of unprecedented and justified hope. Dave’s move is a pointer to us today of the need for more, not less, inclusive governance under Cyril Ramaphosa’s “listening” leadership.

Crossing the floor, the five sat at first as “ANC independents” in 1992, then, with the 1994 democratic general election won by Mandela, they became official ANC MPs. Soon (see picture) Dave found himself sitting as a party whip behind two of the most famous world figures, Queen Elizabeth II, on her 1995 state visit, and Nelson Mandela in a special sitting of Parliament. Dave’s relations with Madiba were always most cordial, and he gave the one-term statesman his every support, for instance in helping to arrange occasions for the President to speak and fundraise.

In 1994 Dave had arrived, as indeed our democracy had, at last and against the odds.

He had played a valuable role in constitutional negotiations at Kempton Park and elsewhere and — having been a member of various parties — was always a useful guide on realignment of parties, and also on parliamentary procedure.

He later became disillusioned with some aspects of the ANC’s showing, including its wobbly position on HIV/Aids, and also the corruption and greed already beginning to become apparent in the ruling party. He left Parliament in 1999 and was highly critical after that over the way felonies in the ruling party multiplied, especially in the Zuma era.

As an MP and whip, Dave was a senior member of constitutional, foreign affairs, justice and other parliamentary committees, visiting numbers of foreign countries. He wrote entertaining parliamentary sketches and international affairs columns for newspapers. When he had left the ANC, he joined the new breakaway party Cope and later assisted Patricia de Lille’s Independent Democrats, neither of which made real headway. As a sideline in retirement, he ran a tour guide company, Diplomatic Destinations. 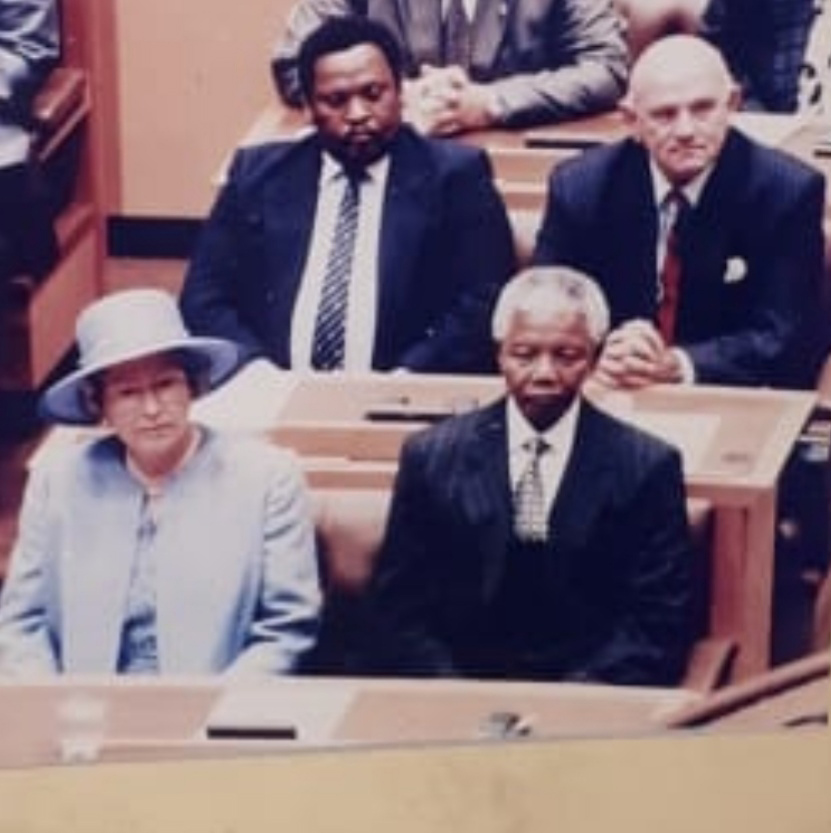 A shot taken during Queen Elizabeth II’s state visit to South Africa in 1995, showing her and President Nelson Mandela sitting in the front row of Parliament, with David Dalling, an ANC whip, behind Mandela. Also in the picture is the Rev M Stofile, chief whip of the National Assembly at the time. (Photo supplied)

As a boy, Dave had excelled in his education at prestigious Pretoria Boys’ High and was head boy in 1957. Fast of foot, he played interprovincial rugby, but a snapped hamstring ended his ambitions of being a full-fledged Blue Bulls player. He had become an attorney after being at Wits University. As a UP member, in 1967 he became a Joburg city councillor, and later served in provincial and finally national legislatures. In 1974 he was elected UP MP for Sandton, before democracy and the party list system arrived.

He added verve and colour to our political life, and his inherent bravery shone through. His courage in debate was legendary, for example in 1987 countering President PW Botha’s tactic of having a special commission headed by a judge prepare the ground for action against First National Bank for allegedly funding “release Mandela” adverts in newspapers. Dave stood up in Parliament alleging that the judge in question was conflicted since he had had his bank account closed twice, yet regarded suitable by Botha to investigate the same bank. That brought the wrath of the Nationalist-dominated Parliament down on Dave, who was severely censured, but rose in the respect of those who admired Mandela.

Courageous moments like that did not come easily in those days.

Dave was always a strong supporter of a free press, even though his strictures of certain English-language papers for playing Pretoria’s game cost him, since some would ignore his existence and never quoted him for years. He started and nurtured the Stellenbosch Development Trust that did much useful welfare and other work among the poor. He was on the board of Rand Water and the council of the Cape Peninsula University of Technology (CPUT).

His formal CV sounds less eventful than the exploits that put Dave into lifelong conflict with authority, and at times welcome diversion in debate. When Winnie Mandela commandeered an oversize room for herself and her staff when the democratic Parliament first met in 1994, it was Dave’s unhappy task, as a whip, to remove her. His mission – which other whips were singularly unkeen to undertake with the Mother of the Nation – failed abysmally. As he walked into the massive office with her at the other end, she called out:

“If it’s about this office, the answer is no. But how are you today, Dave?”

Dave was a man of true courtesy and consideration for the dignity of others, for instance – in the apartheid days – seeing Alexandra Township adjacent to his seat of Sandton as equally his area of responsibility though no blacks had the vote then. When the recently deceased Andrew Mlangeni of Rivonia trial fame seemed a bit overlooked for high office in the first Parliament in our democracy, Dave would invite this modest man who described himself as a “backroom boy” in the struggle, to lunch to chat as a friend. Occasionally, I would join them in the parliamentary dining room. Now both have passed, within about a week.

Dave’s loyalty to friends was legendary, his memory for birthdays embarrassing when his gifts arrived like clockwork. He could be totally trusted with confidences, as was the case when I leaked to him details of a secret deal whereby the Botha government sought to get the media to support a confidential set of guidelines in reporting “terrorism”, and in return promising to exempt them from the provisions of the then state of emergency. This would have left the “alternative newspapers” at the mercy of draconian emergency regulations. The media refused, and the initiative collapsed, but only after Dave had caused a Parliamentary sensation. And he duly protected his source.

He had his share of fierce disputes and persistent detractors, with some true-blue liberals critical of his party-hopping. But he had an impact on public life for the better; and could usually rise with a chuckle above brickbats thrown at him. He lived modestly and was a good and loyal friend to the end, and I salute his memory.

Bayern Munich and Borussia Dortmund are Interested in Barcelona forward de La Fuente
Rodgers has 100 WINS in the Premier League in 210 games. Only Ferguson, Dalglish and Keegan have a better result among the Brits
Ferran Torres: I Knew that Manchester City have strong players, and in training I saw how
Leicester scored 6 points in the opening two rounds of the Premier League for the first time since the 2015-16 championship season
Magnus Carlsen: Edegor's Appearance at the start of my real is amazing
Rummenigge on saying goodbye to Tiago: He hugged me and cried for 5 minutes. I had tears too
Betis Pellegrini scored 6 points in 2 rounds of La Liga. The club is managed for the 3rd time in history
Source https://www.dailymaverick.co.za/article/2020-08-04-david-john-dalling-1939-2020/

CROSSROADS: Ruth Bader Ginsburg’s death poses a supreme political question for the US

OP-ED: We can prevent procurement fraud by deploying 4IR technologies

OP-ED: The Cape’s spring flower spectacle: Building back better with wildflowers as our guides

OP-ED: The UN at 75: Technology wars, the US-China meltdown and Africa’s quandary

News24.com | Under-fire Stan Mathabatha gets backing from ANC in Limpopo after Cosatu calls for his axing

Eskom COO report: ‘Underperformers’ are ‘styling’ themselves as whistleblowers

ALERT LEVEL 1: Teachers with comorbidities told to return to school

Time to let go of the old pot prejudice

News24.com | Pay up and your criminal record for some offences could be 'expunged', proposes new law

OPINIONISTA: The UN at 75: With human rights under siege and grand corruption on the rise, does the world body have enough teeth?

Gareth Bale happy to be back at Spurs

News24.com | Monday’s weather: A warm day will kick off the week, with Pretoria reaching a high of 30°C

LUKANYO MNYANDA: SAA debacle could be fatal for credibility of fiscal policy

MAVERICK CITIZEN COVID-19 REFLECTIONS: I am woman, hear me whisper

Zimbabwe crisis exists in the minds of others, Mnangagwa tells Zanu-PF faithful

STUART THEOBALD: Hard to tell where SAA’s flight of fancy will land

Africa: The World Must Pull Together On Covid-19 Vaccine for All

UK’s tardiness in booting up robotics sector could bring pain

Africa should lead re-examination of assumptions over coronavirus

Sponsored Content: Six notable benefits of AI in finance, and what they mean for humans

Zimbabwe: #zimbabweanlivesmatter - Can South Africa Get It Right This Time?

Rolls-Royce seeks £2.5bn to rev up its balance sheet

Level 1 lockdown: SA must get used to the ‘new normal’

Chennai get the better of Mumbai as IPL begins

DBE: Teachers granted permission to work from home must report for duty tomorrow

It is the Son and Kane show as Spurs rout Southampton

TIM HARFORD: Can you put a number on it? How to understand the world