At least 150 Victorian healthcare workers are infected with COVID-19, an increase of 36 cases in the health sector workforce in just two days.

As new cases of the killer virus soared to 317 on Thursday, the state's highest daily total yet in the pandemic, Premier Daniel Andrews said there were no plans for tougher lockdown restrictions, despite two more lives lost.

The deaths of two men in their 80s brings the state’s death toll to 29, with 109 patients in hospital, 29 of them now in intensive care. 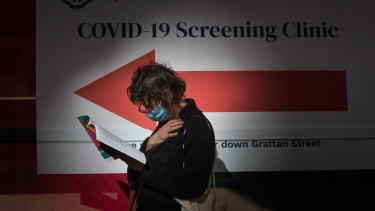 A woman waits outside a coronavirus testing station at Royal Melbourne Hospital on Thursday.Credit:Jason South

Five people in their 40s among are the intensive-care patients, prompting Chief Health Officer Brett Sutton to warn that COVID-19 was not just a disease of the elderly.

The Department of Health and Human Services confirmed on Thursday that of the 388 Victorian healthcare workers who had caught the virus since the pandemic began, 150 of the cases were still active. The department said the "vast majority" of the workers testing positive had been infected outside their workplaces.

It remains unclear how much of the health workforce is now in isolation as known contacts of diagnosed cases. More than 14,000 Victorians with health qualifications have registered to be part of an emergency workforce to replace those off sick or quarantined.

Victorian outbreaks linked to healthcare included 19 cases at the Northern hospital, 16 cases at The Alfred and 16 at Brunswick Private Hospital, while The Age on Wednesday revealed five Royal Children's Hospital healthcare workers had tested positive.

The Premier said authorities were still committed to six weeks of stage three restrictions and it was too early to talk about a tougher or more prolonged lockdown.

While Professor Sutton said there were signs Melbourne’s second surge was being brought under control, there are serious concerns about the 27 clusters linked to aged-care homes and the number of healthcare workers either infected or in isolation.

The federal government, which has responsibility for aged care, responded to the growing number of cases in the sector by mandating protective masks for workers in aged-care homes and disability services in Victoria’s lockdown zones.

Professor Sutton said on Thursday the decision to withhold the results of genomic testing potentially linking the second surge of outbreaks with failures of the state government’s hotel quarantine program pending a judicial inquiry into the scandal was "not his call".

The Doherty Institute, which prepares the genomic data, also said it was unable to discuss the latest report.

An institute spokeswoman said: “The latest genomic sequencing data is subject to the judicial inquiry and it’s not appropriate to discuss publicly until it’s gone through that process.”

On Monday afternoon, Professor Sutton said genomic testing suggested all of the current outbreaks in Victoria could possibly be traced to quarantine hotel breaches.

The Chief Health Officer said that despite the high number of new cases reported on Thursday, he was seeing increasing signs that the outbreak might soon be brought under control. 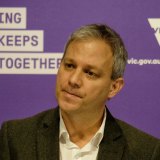 “We're seeing an increase [in cases], but it's relatively slow," Professor Sutton said. “The rate of increase that is being modelled, it's also coming down close to one, where we expect that plateauing of cases. So they're all good signs. I think they're a measure we're getting it under pretty significant control.”

Mr Andrews added that two weeks were generally needed to gauge the impact of new restrictions on transmission rates, hinting that stage four restrictions would still be several days away if at all.

“We plan for every single contingency. It’s too early for us to be moving to a whole new stage,” the Premier said.

Of the 17 men and 12 women in intensive care on Thursday, five were aged in their 40s, an increase of one from Tuesday.

Professor Sutton reiterated that coronavirus could threaten the lives of otherwise healthy young people and at a general death rate of one per 100 cases, he warned Victoria would continue to see multiple deaths per day.

“The most vulnerable people who will be much more likely to require hospitalisation are the elderly. But we know there are people in their 30s, 40s, 50s and 60s in hospital at the moment,” he said.

“So we shouldn't expect that this is an illness that only affects the very elderly. There's people who have died in their 20s and 30s in large numbers internationally.”

Nine people in their 70s were in ICU on Thursday, up from six on Tuesday, plus one woman in her 80s.

The Victorian government also called a halt to all category three elective surgery, such as hip and knee replacements, at all metropolitan Melbourne hospitals.

Inter wants Perisic back, even if Conte remains in the team. Bayern hopes to buy the player for less than 20 million euros
Rudi Garcia on Lyon's chances against city: the quarter-Finals showed that the favourites can also be beaten
CSKA agreed a 5-year contract with Fuchs. The transfer is estimated at 7-10 million euros
Ferdinand on Messi at Barca: Will he want to stay, given the results and the team's performance? Does he have time to wait?
I would not be surprised if Pochettino is appointed in less than 3 days. Ex-Barca winger Carrasco on the club's new coach
Alaba about Mueller: we are Glad that Bayern have such a player
Jordi Cruyff replaced Donadoni at the head of China's Shenzhen
Source https://www.theage.com.au/national/victoria/150-victorian-health-workers-infected-as-new-cases-top-300-20200716-p55cse.html?ref=rss&utm_medium=rss&utm_source=rss_feed