About $15 million has been wiped off the market value of the Brisbane Broncos in just over two-and-a-half years as poor on-field performances, off-field dramas and the coronavirus outbreak have led to the listed company’s stock price plummeting.

Shares in the Broncos, a company listed on the Australian Stock Exchange, hit an all-time high of 56 cents on November 30, 2017. However, the price nosedived on the back of a six-game losing streak and renewed questions about the appointment of coach Anthony Seibold.

Shares were trading at 41 cents during the week, representing an eight-figure fall in market capitalisation in 32 months.

It is a huge decline for what has traditionally been a reasonably solid stock, even when the COVID-19 outbreak and associated market decline is factored in.

Brian Han, a senior analyst in the equity research team at Morningstar, said the fluctuations in market price reflect the fortunes of a football team that has gone backwards since Wayne Bennett was marched out of Red Hill.

“The on-field challenges in recent times paint a pretty challenging outlook,” Han said. “At the end of the day, the product the company sells is the football team. The company gets most of its revenue from membership, ticket sales and sponsorships, and those are inextricably tied to how the football team is going on the playing fields.

“It doesn’t help that we have had this virus affect crowd attendance, that the NRL TV rights have been negotiated down. Player, administration and coach costs are always under pressure, so perhaps that may explain the struggling stock price.” 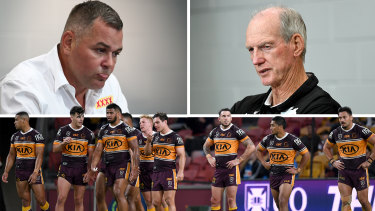 News Corporation, via its subsidiary Nationwide News Pty Ltd, owns 69 per cent of the Broncos. The other major shareholder is Phil Murphy at about 22 per cent. Roosters chairman Nick Politis also owns a small piece of the club. Given the remaining liquidity in the marketplace is limited – about 8 per cent – the stock is prone to rises and falls based on how the team performs. This was evident when the stock plummeted to just 35 cents – the lowest price since September 2016 – a day after the Roosters smashed Brisbane by a record 59-0 margin on June 5.

“Any little trades at the margin can impact the share price quite significantly,” Han said. “This company is all about the football team; the football team drives everything. The fact that newspaper articles are constantly bagging the team and the coach, that will definitely have an impact on investor perception and how the company itself is going because the football team is struggling.

“So any transactions where someone wakes up one morning and goes, ‘Bugger this, I’m selling all of my shares because of how the football team is going', that would have an impact straight away.”

ARL Commission chairman Peter V’landys has publicly stated a desire to introduce a second NRL franchise in Brisbane. Dr Hunter Fujak, a lecturer at Deakin Business School, said factors such as the potential ending of the Broncos’ monopoly in the region could have further ramifications for the club's stock price in the future.

“The profitability impact that will have on the Broncos will be much bigger than one bad season when you can’t have fans anyway,” Dr Fujak said. “If anything, it’s a good time to have a bad season because your [crowd] drawing capacity is low anyway. 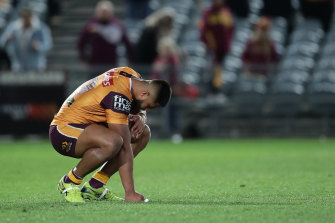 Payne Haas sinks to his knees after the Broncos' sixth straight loss on Saturday night.Credit:Getty

“The market dominance that the Broncos have had [could change]. At the same time, the Brisbane Lions and even the Gold Coast Suns are doing well in the AFL. These things go in ebbs and flows, but the broader market competition seems to be intensifying against the Broncos.

“The thing to factor in is that the whole market got smashed [during the pandemic], but when the market rebounded they haven’t seemed to bounce back up. Part of that is the short-term revenue loss from not having people in stands, poor performance and poor media [coverage], but also the market intensity of the second team and the Brisbane Lions doing well.

“There are a whole bunch of market factors working against the Brisbane Broncos at the moment.

“If I was [considering] buying or selling Broncos shares at the moment, I would probably be selling them.

“Who knows if we will even have [full crowd] attendance back next year. We thought this would be a one-season anomaly, but that will be dictated by science.”

Raheem sterling: Looking for tickets to Lisbon. From the 10th to the 24th. Retweet if you can help
Pep Guardiola: Gabriel is the best player of matches with Real Madrid
Three heroes of Lyon in the match with Juve – among them the defender, whom the fans drove in the fall
Manchester City and Lyon will meet in the 1/4 final of the Champions League on August 15 at Jose Alvalade
Photo of Pep and Zizou – just a gift for Showsport users
Ronaldo was eliminated so early from the Champions League for the first time in 10 years, although he tried very hard – in the playoffs for Juve, only he scores
Rudi Garcia: to Pass Juventus is a feat. The most pleasant defeat in my career
Source https://www.theage.com.au/sport/nrl/15m-stock-crash-broncos-shares-plummet-amid-dramas-on-and-off-field-20200704-p558z3.html?ref=rss&utm_medium=rss&utm_source=rss_feed

Brown believes partnership with Gould will be a winner for Warriors

No new cases in QLD as border shuts

The movie Liam Neeson should not have made

Activist Zainab Salbi: 'I use fashion as a rebellious statement'

Navigating the postpartum period during a pandemic

Employee charged over US star’s death

Driver fights for life after crash

Outrage in China as Trump bans TikTok and WeChat

Diamanti's a diamond as Western United shape as finals wildcard

Why young people are getting the virus

Skating game is a glitchy mess

Russia talking Biden down to influence November election: US intel

The suburbs that are much cheaper than their neighbours

China and Iran want Trump to lose, Russia working against Biden: US intelligence

From Slovenia to The Shire with Violinist Maja Savnik

Why this could be the best hot hatch

How surfing can wipe out COVID-19 blues

Councillor promises to advocate for road safety around schools