It’s hard to imagine the Melbourne spring racing carnival returning to the days of old. But what is impossible to alter are the golden days of old.

The moments still fresh in our memories? Here’s what made headlines. 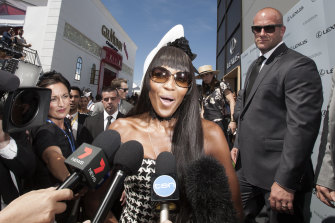 The day: hot. The celebrity about to appear: hot. What could go wrong? For starters, the celebrity who was set to face the cameras at the Lexus Pavilion on Derby Day in 2013 was supermodel Naomi Campbell, and those-in-the-know weren’t entirely sure she’d appear. “There was always the worry of – would she turn up?” says former Lexus PR consultant Julia Tink. But show she did, albeit 90 minutes late, which by Campbell’s standards wasn’t so much a wrinkle in time as an unnoticeable blemish. Being infamously late is part of her trademark; once, she was three hours late to the set of Absolutely Fabulous, in which she had a role. No matter. She finally appeared, goddess-like, in a memorable concoction of Christian Dior strapless dress (black and white, natch) and a Philip Treacy hat, smiling for the press as if she had all the time in the world. Later, she eschewed diva behaviour to chat to basketball player Liz Cambage (“I was in tears for three weeks after!” said Cambage) and down a fancy hamburger. “We all nearly died when we saw that,” says Tink. Was she worth the $75,000 appearance fee? Hey, she delivered.

Nicole Kidman had a pygmalion moment 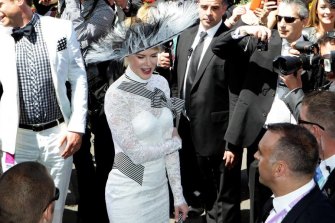 Nicole Kidman in the Birdcage at Flemington in 2012, arriving at the Swisse marquee.Credit:Angela Wylie

In My Fair Lady, there’s an unforgettable scene when Audrey Hepburn – as Eliza Doolittle – meets aristocratic society at the races, dressed in a body-hugging white lace dress with a black and white striped bow set diagonally on one shoulder, a matching hat tilted asymmetrically. When Nicole Kidman arrived as a guest of Swisse for Derby Day, she wore a dress (by L’Wren Scott) and hat (by Stephen Jones) that paid homage to that exact look. It was something marketing consultant Mitch Catlin won’t forget. “It was Hollywood royalty stopping the nation, rather than horses. It was quite something to behold. There were literally hundreds of people standing on each other’s shoulders getting live vision on their phones. I learned the night before that she was going to be paying tribute to an iconic fashion moment, but I didn’t know what that was. Now, that moment is up there with Jean Shrimpton’s mini skirt at the races. In the end, she stayed in the marquee for well over three hours, and since her mum and dad were down for the day, she was quite happy to have a few bets on the horses with them as well.” 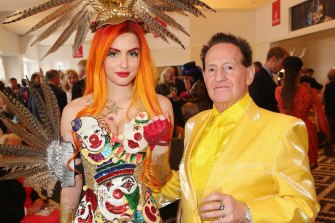 It is impossible to describe Gabi Grecko’s 2014 cup outfit in its entirety, so here are some bullet points: she had appliques of clown faces on top of her dress but also prominently over her breasts, feathers coming out of her short hem and a metallic headpiece that looked like an eagle hadn’t so much landed but was squawking “I’m outta here” in mid-flight. Any passerby would have known immediately: this was the dress to get engaged in. And so it happened when Geoffrey Edelsten – in a canary yellow suit, shirt and matching tie – got down on bended knee in the midst of an interview with journalist Luke Dennehy. (Take note, influencers: Edelsten requested the interview and ensured the videographer was rolling.) “We got a scoop!” remembers Dennehy. They soon got into the Emirates marquee, “where Gabi dropped her ring and they were spied crawling on the floor trying to find it. I miss those kinds of moments in Melbourne. Everyone these days is so safe”.

Kim Kardashian was a no-show

When Swisse entered the Birdcage in 2011 with their first-ever marquee, they decided to do so with a splash, paying Kim Kardashian a reported $150,000+ to appear. But alas: during her first Australian stop in Sydney, the announcement came that Kardashian’s 72-day marriage to basketball player Kris Humphries was over, and she got straight back on a plane to the US. Marketing consultant Mitch Catlin, working with Swisse, hunkered down with HotHouse media and came up with a plan “of how to fill the void – by having a life-size, cardboard cut-out of Kim there instead”. It worked. “It was when Instagram was taking off, and it became this social media phenomenon where people posed with it and then, later, wondered where it had gone.” (Last sighting was reportedly at Motel nightclub, at the deejay deck next to Lauren Phillips.) For Catlin, there are no sore feelings. “There were questions about how much she’d been paid, but the second it happened I spoke directly to her manager and the appearance fee was transferred immediately back to us. So they were actually really great to deal with. And it gave people an understanding of how clever social media moments can deliver results for a brand.”

A few days before the races, US supermodel Coco Rocha had this to say about fashion aplomb: “Why play it safe? Just have fun with it. If you wear something with confidence, people are always interested. If you wear it weak, it’s not a good look. It’s really about how you play a part.” For her first racing appearance, as guest of the VRC in 2013, Rocha was head-turning in Peter Pilotto. But when she judged the National Designer Award, one gold lace outfit by Anthony Capon caught her eye, even though it didn’t place in the competition. She immediately called the designer to ask if she could wear it for Oaks Day. “She wanted to embrace local talent, which was a true reflection of her wanting to be involved with the whole experience and spirit of the carnival,” says Capon, whose mantra generally is “go big or go home”. She wore his gold lace jacket with a matching camisole, pairing it with an Aurelio Costarella skirt. “It was so cool, and it gave me so much exposure. You often enter a competition to win, but here I discovered that there are better things than winning.” 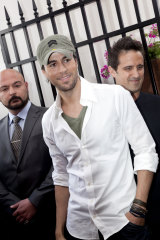 Enrique Iglesias at the Emirates Marquee in 2010.Credit:Shaney Balcombe

When the Melbourne Cup dress code calls for men to don a suit and tie in the Birdcage, what do you do? If you’re singer Enrique Iglesias in 2010, you ignore those rules and front up in jeans and a baseball cap. (At least he had a shirt on. With T-shirt underneath.) As a guest of the Emirates Marquee, PR doyenne Judy Romano was set to look after him, and had sent his management a mood board as well as an offer for him to be dressed by Louis Vuitton. “He got in, but I do think he felt a bit sheepish about it all – he kind of hid in the corner for the day.” In his defence, she adds: “In America, horse racing is like the greyhounds here – they drink out of plastic cups and straws, so when you try and tell management that ladies wear hats and men wear suits, it’s like telling someone to wear a tuxedo to the Manangatang rodeo, if they had one. They think, 'those Aussies are idiots!'”

Balotelli is close to a move to Vasco da Gama. He was offered 2.5 million euros a year
Van Dijk - best Central defender of 2020, Trent-right, Robertson-left (ESPN)
Massimiliano Allegri: Ronaldo is a top player in terms of mentality. He has a new goal every year
Borussia Dortmund presented a collection with Spongebob as part of a deal with Nickelodeon
Woodward on Manchester United and trophies: there is a lot of work Ahead to achieve the stability needed
Neuer - best goaltender in 2020, Alisson-2nd, Oblak-3rd (ESPN)
Liverpool are Interested in 21-year-old Leipzig defender Konate
Source https://www.theage.com.au/lifestyle/fashion/a-look-back-at-the-celebrities-who-have-rattled-flemington-s-birdcage-20201020-p566t4.html?ref=rss&utm_medium=rss&utm_source=rss_feed