An Eid like no other for Victoria's Muslim community

If these were normal times, Inaz Janif and husband Rasheed would have begun their chaotic day before dawn.

It would have started by coaxing their children out of bed - Izdihaar, Amira and little Ibrahim, who is celebrating his first Eid - for their traditional early-morning breakfast of Samai, a Fijian-Indian vermicelli milk pudding with almonds and sultanas. 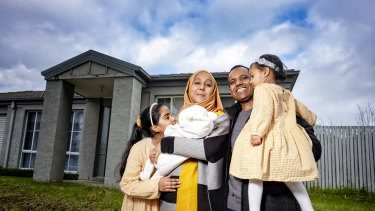 Inaz Janif with her husband Rasheed and their kids, Izdihaar, 9, Amira, 1, and Ibrahim, 3 weeks at their home in Hampton ParkCredit:Luis Enrique Ascui

The kids would have been lavished with presents and filled their stomachs with sweets across Melbourne’s suburbs.

Before the coronavirus pandemic, and again after, such are the Eid al-Fitr celebrations for many of Victoria’s 200,000-strong Muslim population.

Like Easter, Anzac Day and Mother’s Day before, the Islamic holy day, which begins on Sunday to end the month-long observance of Ramadan, will be kept to small family groups. Prayers will be at home and the feasts markedly less extravagant.

But the central tenets of the holy month and its closure have not been dimmed or diverted, says Adel Salman, vice-president of the Islamic Council of Victoria.

“People have still been fasting as normal, still doing prayers as normal and still giving to charity as normal,” he says.

"The two fundamental differences is that we haven't been able to have family and friends over for iftar (breaking the fast in the evenings). That's been quite a shock to the system. In our family, every first day of Ramadan we have the whole family on both sides over here. That's a lot. The house is rocking.

"And number two, not being able to go the mosque, which is such a big part of being Muslim.

“But if anything, people are spending more time in reflection. In some ways, it's been a blessing, and some ways it's been a challenge.”

The lunar month now ended is special to Muslims as it recalls when God revealed the Koran, the Islamic holy book, to Prophet Muhammad beginning in the year 610.

It is a time of prayer and abstinence for Muslims. Those who are able will fast from first light to sundown and often use the month to give away 2.5 per cent of their wealth to those less fortunate, as required under one of the Five Pillars of Islam.

“It’s one of the most important times in the year for us,” Ms Janif says. “We look forward to it because it’s like a spiritual boot camp where you focus on becoming the best version of yourself in that month and, therefore, hopefully carry that on for the rest of the year.”

Ms Janif, who gave birth to Ibrahim in the first week of Ramadan, has also found a silver lining amid the coronavirus restrictions.

“A beautiful thing is that during this Ramadan, it’s been online,” she says. “People are providing prayers, or Koran recitations or just educational talks, which means someone like me, a mum with a baby, is able to access. In the past you’d have to go to the mosque.”

Today, Ms Janif and the family will visit her parents' house, while well-wishes with their wider circles will be extended over the phone.

“My eldest is disappointed because she’s used to visiting her family and friends, but she also understands that we’re doing this to stay safe, for everyone’s sake.”

Kevin-Prince Boateng: Why is there no subject about racism in schools? There's math, English, and history
Bundesliga without spectators inside: they give out a mask and a sanitizer, almost everything is closed, they send people to the toilet outside
Tedesco will start training with Spartak on Thursday. He's been quarantined
Ronaldo is stronger now than before the quarantine. It seems that semi-legal training in Madeira helped
Kevin-Prince Boateng: I want to make sure that one day no black player comes out to work. Maybe on George Floyd's birthday
Guardiola called the Milan midfielder Bonasera. The player's compensation is 50 million euros
Maradona extended his contract with Himnasia until the end of 2021
Source https://www.theage.com.au/national/victoria/an-eid-like-no-other-for-victoria-s-muslim-community-20200523-p54vrw.html?ref=rss&utm_medium=rss&utm_source=rss_feed

Airlines lose billions of dollars in the oil-market casino

Mums should judge whether 'breast is best' for baby, researchers say

Snap says it will no longer promote Trump’s account

'Most extreme response': China commentary roasts US over protests

Calls mount for JobKeeper to be extended as Australia enters recession

'HMS Bubble': How the Queen is getting through lockdown

Dozens Arrested in Downtown Tampa as Protests Dispersed by Police

Trump administration bans Chinese passenger carriers from flying to US

US protests: What happened overnight

Trump administration 'to bar Chinese passenger carriers from flying to US'

'It does happen here': Calls to address police brutality in Australia

'In many ways, we are on the other side': Qld sees light at end of COVID tunnel

Young homeless thrown off couches onto streets during COVID-19

When gyms reopen, your workout will look very different

Your Daily Horoscope for Thursday, June 4

All lives matter, but some more than others

It's hard not to see the end days of an empire, but America's friends must hope it finds a better path

From the Archives, 1992: The Queen’s loyal subjects go into battle

Loudest voice of retribution and violence is Trump's

F is for frog, not that other word!

Wave of abuse scares Coast surfer from the water

We need new ways to listen to Indigenous voices

Victoria needs to get in line with national position on China

‘Obama was one of the most racially divisive presidents in the US’: Cory Bernardi

How is looting not violence but ‘words are’: James Morrow

Homeowner handouts are not the best form of stimulus spending