The Morrison government is preparing to unleash an "astounding" amount of spending in next month's budget to drag the country out of its first recession in 29 years with the nation unable to rely on ultra-low interest rates to boost the economy.

Longer-term impacts of the COVID-19 pandemic on the country's finances are also crystallising, with the government's Centre for Population forecasting the fertility rate to drop well below the level used in budget assumptions.

As the government announces an extra $305.6 million to primarily help families and childcare providers across Victoria, The Sun-Herald and The Sunday Age can reveal senior ministers are preparing an avalanche of spending that will push the budget deficit to an unprecedented level. 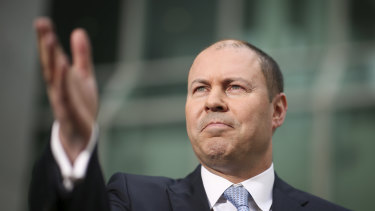 Treasurer Josh Frydenberg is preparing a budget that will contain an "astounding" amount of expenditure to get the economy out of recession.Credit:Alex Ellinghausen

A deficit well beyond $200 billion is now expected, dwarfing the previous record of $54.5 billion set by the Rudd government during the depths of the global financial crisis in 2009-10.

One senior member of the government, speaking on condition of anonymity, said the size of the spending to be revealed in the October 6 budget would shock many observers, describing it as an "astounding" injection of assistance into the economy.

Some of the spending will be due to the government bringing forward its already legislated personal income tax cuts. Just pulling forward tax changes due to start in mid-2022, which includes taking the top threshold for the 32.5 per cent tax rate to $120,000 from $90,000, would cost the budget more than $14 billion over two years.

The $680 million HomeBuilder program, which ends on December 31, is being considered for extension over fears the employment-heavy construction sector will start to run out of new work by the middle of next year.

Supporting families so people can get back into the workforce will be a feature of the budget.

Federal Education Minister Dan Tehan will today announce a "recovery payment" worth 25 per cent of pre-COVID revenue for child care services in Victoria that will be available until January 31 next year.

It will cover centre-based child care, family day care and in-home care, starting from September 28. A similar payment, worth 40 per cent of pre-COVID revenue, will be available for outside school hour care once in-school teaching resumes in Victoria.

"By easing the activity test Australian families can continue to access up to 100 hours of subsidised care per fortnight if their work, study or training hours have been impacted compared to their pre- COVID-19 activity," Mr Tehan said. 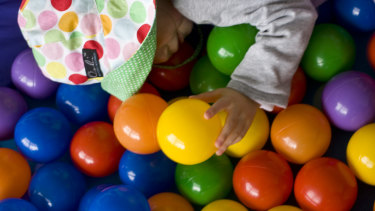 An extra $305 million will go towards childcare centres and families with a special focus on Victoria.Credit:Louie Douvis

The budget will contain extra infrastructure spending, spread across the entire country including tourist-dependent regions which have been heavily affected by the closure of the international border.

The government has pulled forward more than $10 billion in infrastructure projects from the 10-year pipeline of work it announced in the 2019-20 budget. Those brought forward projects will have to be replaced in next month's budget.

That will be on top of extra spending by the states and territories which will roll out their own responses to the coronavirus recession in the weeks after federal Treasurer Josh Frydenberg delivers the October 6 budget.

Mr Frydenberg last week conceded that every dollar of spending is being borrowed "and the debt will be there for future generations to pay back". Gross debt hit a record $787.7 billion on Friday.

The hit to the budget caused by the current recession is not only short-term; the nation's long-term finances are also at risk from a substantial drop in population growth.

Research from the government's Centre for Population released on Saturday forecasts the nation's fertility rate will drop to 1.59 babies per woman next year compared to 1.7 babies in 2018.

The analysis, from demographer Peter McDonald, projects families will have fewer children over the next two years before an increase in the fertility rate in 2024. But that fertility rate, at 1.69, would still be far short of what the government has been using to underpin its budget forecasts.

"The outbreak of COVID‐19, as well as the measures taken to limit its spread, is expected to affect fertility by producing uncertainty among young people that leads to them deferring when they have children," Professor McDonald said in his report.

"Some households are also likely to defer children where one or both parents lose their eligibility for parental leave payments through COVID‐related unemployment."

Last year's budget forecast fertility to increase to 1.9 by 2021 and remain there for the rest of the decade. Lower fertility feeds directly into reduced government revenue, particularly GST.

The extra spending, on top of the collapse in tax revenues, will be more important than normal as the Reserve Bank has official interest rates at a record low of 0.25 per cent.

New research from the RBA's economics department shows that with interest rates at or near zero, "an adverse economic outcome becomes more likely".

"A consequence of the cash rate being constrained by the effective lower bound is that the central bank would be unable to stimulate the economy sufficiently, using conventional policies, in response to negative economic shocks," they found.

"As such, it could take longer to get the economy back to full employment and for inflation to reach its target."

Arteta about 0:1 with Leicester: I Don't know why the hell our goal was canceled. It is difficult to create space when 10 people are sitting behind the ball line
Rodgers on 1-0 with Arsenal: Leicester deserved to win. Vardy is a world-class player
Juve without Ronaldo could not beat Verona and Crotone in Serie A
Vardy has scored 11 goals in 12 games against Arsenal in the Premier League. Only Rooney has more
15,000 Teddy bears were planted at the Heerenveen match as part of a campaign to fight cancer. Toys sold for 230 thousand euros
Adidas and Pharrell Williams have reinvented the old forms of Real Madrid, Arsenal, Manchester United, Bayern Munich and Juve. The design is hand-made and celebrates imperfection
Barcelona filed a complaint about the refereeing of the match with Real Madrid to the Spanish football Federation
Source https://www.theage.com.au/politics/federal/astounding-expenditure-looms-in-recession-busting-federal-budget-20200919-p55x6w.html?ref=rss&utm_medium=rss&utm_source=rss_feed

Escape to this Convict built estate with a private beach

Bold bid to bring ‘swagger’ back to Melbourne CBD

Role reversal: Only 20, Jenny cared for her mother after a stroke

Lower back pain: Exercise is the cure but there is a catch

Habitat or hazard? The dilemma of felled trees ahead of fire season

‘If I had granted him bail, he would not be dead’