By Damian Troise and Alex Veiga

US stocks are mixed on Monday in New York as Wall Street keeps wrestling with whether the economy will successfully avoid a recession amid rising interest rates and high inflation.

The S&P 500 is 0.3 per cent higher in late trade, the Dow Jones is 0.1 per cent lower and the Nasdaq has added 0.2 per cent. The Australian sharemarket is set to slip, with futures at 5.13am AEST pointing to a fall of 15 points, or 0.2 per cent, at the open. The Reserve Bank meets on Tuesday afternoon, and are expected to raise interest rates again. 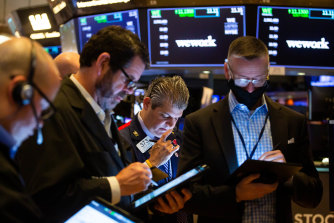 Wall Street started the session with strong gains but they have petered out.Credit:Bloomberg

Stocks started the day with bigger gains, and the S&P 500 was up as much as 1.5 per cent, with the Nasdaq briefly up nearly 2 per cent. But they fell back as Treasury yields continued to climb, putting downward pressure on stocks. When safe bonds are paying more in interest, investors are usually less willing to pay high prices for stocks, which are riskier.

The yield on the 10-year Treasury jumped back above 3 per cent to 3.03 per cent, up from 2.95 per cent late Friday. It’s moving toward its levels from early and mid-May, when it reached its highest point since 2018 amid expectations for the Federal Reserve to raise interest rates aggressively in order to rein in the worst inflation in decades.

Such moves will slow the economy by design, and investors are trying to guess beforehand whether the Fed will move so aggressively or so quickly that it will cause a recession.

Economists at Goldman Sachs said in a research report they still see the Fed and it chair, Jerome Powell, on course to walk the line successfully and engineer what’s called a “soft landing” for the economy. That was more encouraging than some of the warnings that dragged on markets last week, including one from JPMorgan Chase CEO Jamie Dimon, who said he’s preparing for an economic “hurricane.”

The number of job openings has started to decline, which could reduce some of the pressure pushing wages and inflation higher. Snarled supply chains around the world have also improved, though the Goldman Sachs economists led by Jan Hatzius still see a 35 per cent risk of a US recession within the next two years.

“To say that markets are likely to remain rangebound is often a cliché, but we think it currently has more content than normal because Chair Powell is so intently focused on the role of financial conditions in delivering a soft landing,” Hatzius wrote.

As it measures financial conditions, the Fed looks at how prices are behaving in stock and bond markets. The S&P 500 is very close to where it was a month ago, churning as investors put on and take off bets that the Fed may take a pause in its sharp hikes to interest rates later this year. But it’s seen sharp day-to-day and even hour-to-hour swings through that stretch, and the S&P 500 remains down more than 13 per cent for the year so far.

Wall Street’s gains to start the week followed up on strength for European and Asian stock markets after Chinese authorities relaxed some COVID-related restrictions. Diners returned to restaurants in Beijing for the first time in more than a month, for example. That eased concerns tough anti-virus measures will slow the world’s second-largest economy and mean further roadblocks for global supply chains.

On Wall Street, companies in the solar power industry were some of the biggest gainers after President Joe Biden ordered emergency measures to increase U.S. manufacturing of solar panels and exempted panels from Southeast Asia from tariffs for two years.

Amazon was the biggest force pushing the S&P 500 higher, accounting for nearly a sixth of the index’s gain all by itself. It rose 3.2 per cent after it splitting its stock, 20-for-1. Such a move lowers its stock price and makes it more affordable to some smaller-pocketed investors, all while leaving its total value alone.

Spirit Airlines rose 6.6 per cent after JetBlue Airways boosted its buyout offer in the bidding war for the discount carrier.

On the losing side was Twitter, which slipped 1.6 per cent after Tesla CEO Elon Musk threatened to call off his deal to buy the company, saying Twitter was refusing to hand over data. Musk has been complaining about how many Twitter’s users were made up of bots and spam accounts. Shares of Tesla rose 2.2 per cent.

Big swings could still be ahead for Wall Street this week, particularly on Friday when the U.S. government releases its latest monthly update on inflation.