Stocks fell in afternoon trading on Wall Street on Wednesday in New York and trading remained choppy as investors try to determine how rising interest rates and inflation will impact the economy.

The S&P 500 is 1 per cent lower in late trade, the Dow Jones has shed 0.9 per cent and the Nasdaq has fallen by 0.8 per cent. The Australian sharemarket is set for a negative start to the session, with futures at 4.58am AEST pointing to a fall of 55 points, or 0.8 per cent, at the open. 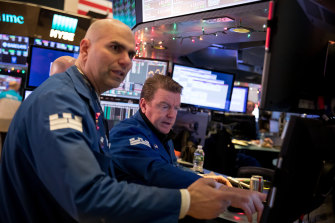 Wall Street is on track for a losing session.Credit:Bloomberg

Smaller company stocks fell more than the rest of the market, signalling concerns about economic growth. The Russell 2000 fell 1.6 per cent.

Bond yields rose. The yield on the 10-year Treasury, which banks use to set rates on mortgages and other loans, rose to 3.02 per cent from 2.97 per cent late Tuesday.

It’s been a choppy week for major indexes, which have lurched between gains and losses, sometimes by the hour. The benchmark S&P 500 index has ultimately closed higher each day this week, putting it on track for weekly gains. It has notched losses for the eight out of nine last weeks.

The big concerns on Wall Street remain rising inflation and whether the Federal Reserve’s shift to aggressively raise interest rates will help temper the impact or possibly push the economy into a recession.

“What investors need to realise is it’s going to be a long time until inflation numbers look good,” said Brian Levitt, global market strategist at Invesco. “What they need to focus on is whether it gets better or worse related to expectations.”

Inflation continues to sting businesses. Lawn care products company Scotts Miracle-Gro slumped 9.6 per cent after slashing its profit forecast for the year because retailers aren’t replenishing orders as expected. Retailers have been warning that inflation is crimping sales as consumers shift to either spending on services or focusing on necessities rather than purchasing otherwise discretionary items, like electronics.

The impact from inflation has only been worsened by Russia’s invasion of Ukraine, which has put more pressure on energy and food prices since February. US crude oil prices rose 2.9 per cent on Wednesday and are up 63 per cent for the year, while wheat prices are up 39 per cent in 2022. Supply chains have also gotten tighter following a series of lockdowns for Chinese cities fighting COVID-19 cases.

“As long as commodity prices remain elevated, its going to be more difficult to see headline inflation come down,” Levitt said.

Greater inflation pressure from the conflict in Ukraine and lockdowns in China prompted the Organisation for Economic Cooperation and Development to cut its forecast for economic growth, following several other international groups, including the World Bank, that expect inflation to have a lingering impact on economies around the world.

Treasury Secretary Janet Yellen, testifying before the the Senate Finance Committee on Tuesday, said she expects inflation to remain elevated and bringing that down is a top priority. The Fed is widely expected to raise its key short-term interest rate by half a percentage point at its meeting next week. That would be the second straight increase of double the usual amount, and investors expect a third in July.

The Fed’s goal is to slow economic growth enough to cushion inflation’s impact. Demand for goods had been outpacing supplies and production capacity through most of the post-pandemic recovery. But, investors are concerned that the Fed could go too far too fast in raising rates and nudge the US economy into a recession, especially with economic growth already slowing.

Wall Street is closely watching economic data for signals that could prompt the Fed to potentially ease up on the size of its rate increases. The next big update on inflation arrives on Friday, when the US government releases its latest reading on the consumer price index.