The S&P 500 is 0.5 per cent higher in late trade after recovering from a loss of 1 per cent earlier in the session. The Dow Jones Industrial Average has added 0.5 per cent and the Nasdaq is 0.7 per cent higher. The Australian sharemarket is set to open higher, with futures at 5.02am AEST pointing to a rise of 43 points, or 0.6 per cent, at the open. On Tuesday, the ASX fell by 1.5 per cent after the RBA’s surprise 0.5 per cent rate hike. 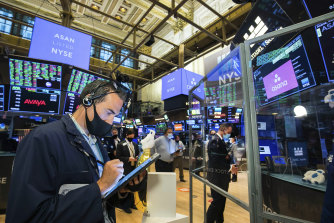 Wall Street’s rise has the ASX poised to recover some of the ground it lost on Tuesday. Credit:AP

Technology stocks gained ground and did much of the heavy lifting to support the broader market. Apple rose 1.6 per cent.

Retailers suffered some of the biggest losses following a discouraging update from industry giant Target. The big-box retailer shed 3.7 per cent after saying it’s cancelling orders from suppliers and slashing prices. The move comes as consumers shift spending from clothing and electronics to services like travel and dining out as pandemic fears abate.

Bond yields eased following Monday’s jump, which was fuelled by persistent anxiety over a possible US economic slowdown. The yield on the 10-year Treasury fell to 2.99 per cent from 3.03 per cent late Monday.

Markets have been choppy as investors try to determine how much damage rising inflation will inflict on the economy and whether rising interest rates will help or hurt the situation.

Businesses are raising prices on everything from food to clothing to offset inflation’s impact on their costs. Those higher prices have squeezed consumers, who are trimming their spending on high-priced items as they spend more on necessities like food.

Russia’s ongoing war on Ukraine has raised food and energy prices across the globe. Record-high gasoline prices have put an additional squeeze on consumers. US crude oil prices are up 59 per cent this year. The World Bank has sharply downgraded its outlook for the global economy, pointing to Russia’s war and concerns about the potential return of “stagflation,” a toxic mix of high inflation and sluggish growth unseen for more than four decades.

The Federal Reserve has responded by pivoting from a policy of maintaining low interest rates during the pandemic to aggressively raising interest rates to slow economic growth and temper the impact from inflation. The plan has raised concerns that the Fed could go too far too quickly and possibly tip the US economy into a recession.

Worries about the aggressive rate hikes and inflation have weighed on markets. The benchmark S&P 500 index is coming off of its eighth losing week in the last nine. Big daily swings have become the norm for markets as investors review government data and corporate updates on inflation. They will receive another update on Friday when the US releases its latest monthly update on consumer prices.

At the Fed’s policy meeting next week Wall Street expects a 0.5 percentage point increase in its benchmark interest rate, double the size of the central bank’s usual increase.