Australia has mounted its biggest Emmy offensive on record, with nine nominees chasing eleven of the night's golden statues. Some of Australia's biggest stars - Cate Blanchett, Hugh Jackman and Toni Collette - are nominated, along with our best creative talent, including screenwriter Tony McNamara and cinematographer Greig Fraser. 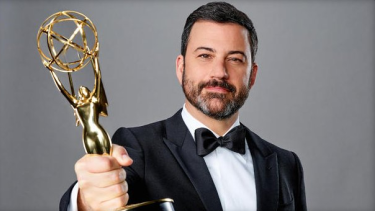 Jimmy Kimmel, host of the 2020 Emmy Awards.Credit:Academy of Television Arts and Sciences

When the nominations were announced Adelaide-born Snook, 32, said she was "incredibly chuffed to be receiving my first Emmy nomination. What the actual, yikes!", adding that her fellow nominees were "immeasurably wonderful folk."

"So many people contribute to making this show what it is, so here's to [them], congratulations," Snook said.

The nomination caps off an extraordinary year for Snook; she is currently starring opposite Seth Rogen in An American Pickle and has been cast as the lead in Searchlight's adaptation of Jane Austen's Persuasion.

The 72nd annual "primetime" Emmys conclude on Monday night, after five nights of gongs focused on the industry's creative arts. 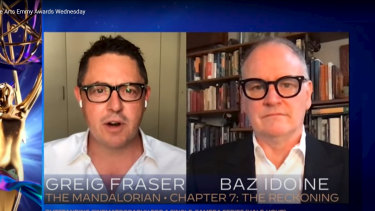 For some there was early victory. Greig Fraser has already taken home the Emmy for cinematography for a single-camera half-hour series category for his work on the hit Disney+ Star Wars series The Mandalorian.

Not so lucky was Australian composer Antonio Gambale, nominated for outstanding music composition for a limited series and outstanding original main title theme music for his work on Netflix's Unorthodox. 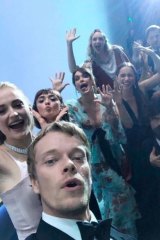 Closer, closer ... too close! Alfie Allen and the cast of Game of Thrones doing what you won't see at this year's Emmys.Credit:Instagram

And in Monday's primetime Emmys telecast, Australia mounts its biggest offensive: Hugh Jackman and Cate Blanchett in lead actor and actress in a limited series for their work on Bad Education and Mrs America respectively, Sarah Snook and Toni Collette in the supporting actress categories, for Succession and Unbelievable, and Tony McNamara in the writing for a comedy series category, for his series The Great.

In many respects this year's Emmys is an open field; due to Covid-19 restrictions the traditional auditorium will be replaced by a "virtual" telecast with 138 stars from 114 locations across 10 countries.

Altered viewing habits during the "for your consideration" voting period has shifted the mix of nominees, with fringe hits like Schitt's Creek, What We Do in the Shadows, The Mandalorian and Stranger Things edging into the key comedy and drama categories.

The 72nd annual primetime Emmy awards will air on Monday, September 21 from 10am on Fox Arena and will stream via Foxtel.

Griezmann did not make any effective actions in 6 matches under Koeman
Ole Gunnar Solskjaer: Leipzig made Manchester United work hard. Rashford had a big impact on the game
Roberto victory over Juventus: the Best response to the unrest in Barcelona - it's a game
Ronald Koeman: Barcelona played their best match of the season against Juventus. We had a lot of chances
Messi scored 70 goals in the Champions League group stage. This is a record
All 4 of Messi's goals this season are scored from penalties. Three for Barcelona, one for Argentina
Greenwood scored for Manchester United in the Champions League at the age of 19 years and 27 days. Only Rooney did it at a younger age
Source https://www.smh.com.au/culture/tv-and-radio/australia-mounts-emmy-offensive-with-record-number-of-nominations-20200919-p55x69.html?ref=rss&utm_medium=rss&utm_source=rss_feed

Our Pick: a twisted take on Southern noir

'I love desperate people': Call Me By Your Name director takes on TV

'Who the hell elected you?': US Senate tech hearing becomes political tussle