The settlement “draws a line” under the scrapped deal, Prime Minister Anthony Albanese declared at a press conference in Sydney on Saturday morning.

Albanese said he expects to fly to Paris shortly to visit French President Emmanuel Macron, with the pair texting each other to finalise the details of the settlement and the forthcoming trip. 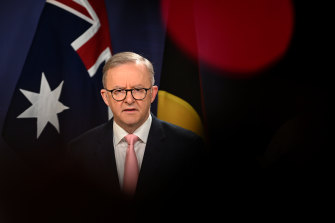 The prime minister said the estimated total cost of the axed deal to purchase French submarines from Naval Group was $3.4 billion.

“It brings the total cost of the former government’s failed policy to $3.4 billion. This is a saving from the $5.5 billion that Senate estimates was told would result from that program,” he said.

“This is an opportunity to draw a line under what has been, I don’t need to I think labour the point, that the tensions between Australia and France, I think, have been pretty obvious, and they go from the top.”

Albanese said he intended to have “an honest relationship with France and one that is based upon integrity and mutual respect”.

His visit to France will be in the “foreseeable future”.

Albanese thanked Naval Group for agreeing to the deal.