Worries that higher interest rates would slow the economy weighed on the sharemarket on Tuesday, with the ASX 200 falling more deeply into the red after the RBA’s aggressive move, closing 1.5 per cent lower. 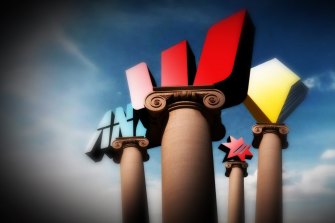 The Australian dollar jumped in response to the RBA’s move, rising from US71.85¢ to as high as US72.49¢, as economists predicted the RBA would raise rates by another 0.5 percentage points next month.

At 5.45pm, none of the major banks had announced how they would be changing mortgage rates in response to the RBA move.

Portfolio manager at Milford Asset Management, Will Curtayne, said investors had already factored in the benefits banks are likely to make from rising rates through wider net interest margins, but now the market’s focus had turned to the risk of bad debts.

Portfolio manager at Tribeca Investment Partners, Jun Bei Liu, said the drop in bank shares was a “knee-jerk” reaction that centred on the risk of rising defaults, which have been at low levels. “Investors are just a little bit concerned about the prospects for mortgages, as well as economic activity, given the sharp rate rise,” Liu said.

Morningstar analyst Nathan Zaia said investors were probably concerned about the possibility the RBA would raise rates more quickly to rein in inflation, squeezing some borrowers in the process. “It does not give people as much time to adjust to these higher interest payments,” he said.

Zaia said he was not expecting a sharp increase in bad debts, which have been at unusually low levels after the RBA slashed the cash rate to a record low during the pandemic. “Are they going to normalise? Yes, but you’re still talking about a pretty low rate environment,” Zaia said.