If there's anyone who knows what the Sydney Thunder need to do to take out their second WBBL final on Saturday night, it's Sam Bates.

Nursing a broken wrist during the Thunder's first finals campaign in 2016, the spin bowler says the pain of watching her team take out the competition in its maiden year without her was much greater.

But with the Thunder heading into their second decider, Bates now has the chance to atone by contributing to a second title for the girls in green.

Bates was ruled out of the back end of the inaugural season after breaking her right wrist in two places while diving for a catch. The injury left her sitting with the coaches on the sidelines for the final.

"As years have gone by and we haven't gotten back to that final, I think it's definitely dawned on me that, that might have been my one opportunity," she said.

"It was one of the clutch games as well and in those moments you always think about what you could have given to the team and how you could have contributed. Sitting on the sideline, the coaches also seem to be more stressed than the players so sitting around them was definitely tough." 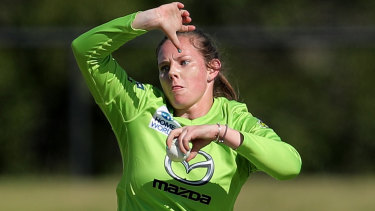 Sam Bates is looking forward to playing in her first WBBL final.Credit:Getty

Bates is optimistic about the Thunder's chances against the Melbourne Stars on Saturday mainly because the moos within the 2020 team reminds her of the team spirit in the squad that took out the maiden title. Bates and skipper Rachael Haynes are the only remaining members of the inaugural side.

"We all get along really well and looked out for each other; this year has been quite similar," she said.

One thing that has changed since 2016 is the stature of the WBBL tournament, which didn't have any prize money back then and failed to garner any "big publicity", Bates said.

"There's lots of difference," she said. "We definitely didn't sell out in the crowd...and this year it's already sold out before we knew who was in the final. To be recognised the way we have been in the last couple of weeks is pretty amazing."

Boosting her confidence in the lead-up to the finals, Bates signed a contract extension for two more years with the Thunder on Wednesday.

"I didn't play any underage cricket growing up, I was always a last selection all the time for these kinds of competitions, so to be able to roll the first ball of WBBL and then be here six years later and hopefully for another couple of years to come is quite an unreal moment," Bates said.

On Friday, 17-year-old superstar Phoebe Litchfield also signed a two-year extension with the club, after a stellar second WBBL year. Litchfield, whose contributions in several run-chases this year have been vital, believes her side is going in the finals as the "underdogs".

"I definitely am nervous out there, but having that senior player with me helps," she said about her No.5 spot. "We always are really good in the bowling sort of side, but with our batting, we just need to definitely have that one big partnership."

One thing Litchfield is not looking forward to is leaving the WBBL village, where the Thunder have spent the last four weeks in a biosecure bubble.

The environment has provided some awkward encounters over the past couple of days, with only the Thunder and the Stars remaining in the hotel.

"Yeah, it's weird when we see them," she said. "But, to be honest, I don't really want to leave. A lot of people are like 'oh my god get me out of here' but I'm definitely going to miss the group."

Haynes is eagerly anticipating the chance to see her Melbourne family again after being separated from them since March due to border closures.

"I've got to say, I haven't enjoyed it," she said on Friday morning. "I'm not coming at it from a point of view of being ungrateful or anything like that...but it is a tough environment to be in, it's hard to get away from the game."

Tuchel will take charge of Chelsea
Okko Sport will show all the remaining matches of the Italian Cup this season
Lampard will be sacked by Chelsea in the near future. I can announce today
Fenerbahce asks fans to chip in on Ozil's salary. It's simple: you send SMS-you make 2 euros
Gazprom can remain a sponsor of Schalke if the club is relegated to the 2nd Bundesliga
Bruno about the free-kick: Cavani told me to hit the goalie's corner
Pep Guardiola: It is almost certain that Garcia will leave Man City at the end of the season
Source https://www.theage.com.au/sport/cricket/bates-ready-to-put-broken-dream-behind-her-and-lead-thunder-to-glory-20201127-p56im1.html?ref=rss&utm_medium=rss&utm_source=rss_feed