Beaches along much of the NSW coast are getting pummelled by powerful surf and strong winds generated by a low-pressure system over the Tasman Sea.

Waves up to five metres high are expected to batter beaches in Sydney and along the NSW coast, from Taree in the north to Jervis Bay in the south, while the Illawarra region was hit with wind gusts up to 100km/h overnight.

The Bureau of Meteorology issued a severe weather warning for damaging surf conditions and strong winds in Sydney, the south coast, Hunter and Illawarra regions on Sunday. The bureau also warned of gale-force winds for beaches around Batemans Bay and Eden in the south, and blizzard conditions in the NSW Snowy Mountains. 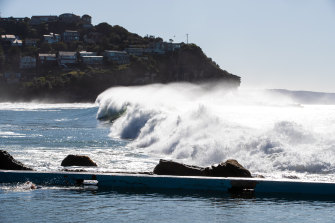 Waves crash into shore at Whale Beach in Sydney’s north on Sunday.Credit:Edwina Pickles

“A deep, slow-moving low-pressure system over the southern Tasman Sea is generating a large and powerful south-to-south-westerly swell along the NSW coast,” the bureau said.

“Very heavy surf which may lead to localised damage and coastal erosion is possible from this evening along central parts of the NSW coast.”

Meteorologist Gabrielle Woodhouse said waves averaging 1.5 to 2.5 metres in height were rolling into beaches roughly every 13 to 15 seconds along the coast.

She said damaging surf conditions were expected along much of the NSW coast and wave heights were predicted to reach five metres on Sunday.

“It’s very powerful surf that’s coming in, and it’s really the areas that are exposed to the southerly swell that will be most at risk.”

The bureau said beach conditions could be dangerous and warned people to “stay well away from the surf and surf-exposed areas”. It said the damaging surf conditions would likely ease by Monday afternoon.

“However, hazardous surf conditions associated with a large and powerful surf of three to five metres is likely to continue for the remainder of Monday and Tuesday.

“Locations which may be affected include Newcastle, Sydney, Wollongong, Bulli, Port Kembla and Kiama,” the bureau said.

Woodhouse said damaging winds that rattled the coast - particularly the Illawarra - early on Sunday were set to ease. The coastal town of Bellambi, north of Wollongong, registered the largest gust of 100km/h about 1am.

Winds of more than 90km/h were also recorded at Nowra and Moss Vale overnight.

“The winds are easing off a little bit in the afternoon, but it is going to remain on the windy side,” Woodhouse said.

Snow showers were forecast for Thredbo and Perisher in the Snowy Mountains on Sunday. Snow fans flocked to the mountains for the opening of the ski fields for the long weekend, following weeks of snow. Car parks at Thredbo filled by midday on Sunday, forcing the closure of Alpine Way at SkiTube Way. Motorists were being urged to avoid the area.

Perisher recorded 94 centimetres of snow over the past seven days, while Thredbo ski resort said snow depths had reached about 125 centimetres in the lead-up to opening weekend.

Australian snowboarder Tess Coady, who is a Thredbo ambassador and Olympian, said on Sunday that “to be able to ride this much terrain on opening weekend was insane. You can just feel how stoked everyone is to be here.”

A high-pressure system moving across the state was expected to bring more sunny periods and temperatures that are a few degrees warmer on Tuesday.

Sydney’s maximum temperature is expected to hover around 18 to 19 degrees from Wednesday through to the weekend.