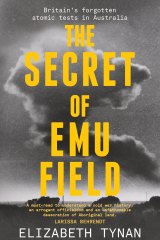 The Secret of Emu Field by Elizabeth Tynan

While on research, I visited the Polygon, an area in remote north-eastern Kazakhstan where the USSR conducted hundreds of nuclear tests. It was late summer and the battered earth was carpeted in wildflowers. The situation in our rump-sprung four-wheel drive had become tense. Our guide, a former Soviet nuclear physicist, baulked at a question asking whether the Polygon had been evacuated of Kazakh tribespeople before testing had begun. Incensed, he turned to me: “You are from Australia, no? Why don’t you research about the British and the Aboriginals in South Australia?!”

So I did and stumbled onto my own ignorance that, although no defence, is shared by too many Australians. If given the reception it deserves, Elizabeth Tynan’s new book, The Secret of Emu Field, will help plug this gap.

Totem 1 and Totem 2 were two British nuclear tests performed at Emu Field, South Australia, in October 1953. They have all but vanished from our popular memory, drowned out by the larger tests performed 200 kilometres up the road at Maralinga. Yet, they remain an important chapter in Australia’s Cold War story which, faithful to the genre, still has details redacted from the public record.

In it, the colonial attitudes of the British are resilient. Following scant detail from the British, Australian prime minister Robert Menzies was quick to sign over central Australia as a site for a foreign intimate to conduct nuclear testing. From there, Australians and our government were excluded from decision-making or even knowledge of fundamental facts. When the time came to detonate, both countdowns boomed over the saltbush in an English accent.

The tests’ purpose was to see if the British could produce effective nuclear weapons on the cheap, by including a larger amount of the less stable plutonium-240. That Totem 1 was expected to be the more powerful, but turned out to be weaker, betrays how uncontrolled these tests were.

The British, while strict on security, were laissez-faire about safety of Australian and even their own servicemen. This led to many of them, struck ill in later life, still too terrified to speak out, lest they be imprisoned. In contrast were the procedures of a detachment of American pilots and crew, far more scrupulous in ensuring their people were not exposed to radioactivity.

Tynan does an excellent job recounting a story that has been triple-veiled through time, the red dust of central Australia and Cold War secrecy. The identities she puts to page are a troupe of pompous British military officials dripping with condescension, white Australians foolishly loyal and vigorous in their duties, and the indigenous Aṉangu people.

After the tests, a black mist coated trees in a sticky residue and made many of the Aṉangu sick for generations. Tynan does her very best to reconstruct the stories of a people poisoned by a contaminated land. Most were unearthed by a royal commission held 30 years later. Still, critical details remain unrecoverable. We have no baseline of health data to compare the subsequent fallout. More than the scant 1950s information-gathering infrastructure and remote location, this negative space is a crime of omission.

As known full well by my guide in Kazakhstan, neither the British nor the Australian government took responsibility for ensuring the land was clear of people. When the British left, it was in such a hurry that dishes were still in the mess tent, not to mention the red dirt melted to radioactive black glass called trinitite. Both were left to Australia to clean up.

The British were allied with the inventor of the atomic bomb, so why build their own? Tynan mentions the faint possibility of a second Cold War between the US and Britain, with Britain excluded from American nuclear secrets. This was together with the general assumption that nuclear proliferation would be more extensive than today’s eight nations. Yet, underlying this is immense human folly. The British tests were less the product of realpolitik calculus than of baser human egoism: injured pride, loss of prestige, the need to be noticed by the bigger kids in the nuclear playground.

That this story is known better to a Russian scientist in Kazakhstan than to most locals of the tests’ host country is a poor reflection of what we consider important. And so, The Secret of Emu Field is a vital addition to the national record.