Tharnicaa Nadesalingam has celebrated her fifth birthday in her hometown of Biloela, four years after being detained under the previous Coalition government.

Balloons, cake and overwhelming joy set the tone as locals gathered at a nearby park to celebrate after “Tharni” and her family returned to the Queensland outback town on the weekend. 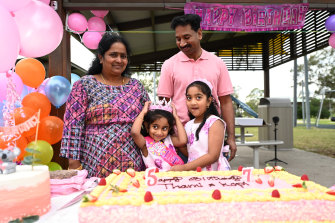 Tharnicaa Nadesalingam celebrates her fifth birthday with her parents Priya and Nades and her sister Kopika in Biloela.Credit:Getty

“Oh my God, everyone’s just got the biggest grins on their faces,” social worker and Biloela local Angela Fredericks said.

“When the family arrived and they walked down, the girls had little tiaras on and the birthday girl had a sash and they wore pretty pink dresses.

“I think for a lot of us, that’s when it hit that this is what we’ve been fighting for, for them to be able to walk to their local park here, you know have the stereotypical birthday in the park, which we do here. So this is why we did this. This is what we’re fighting for.” 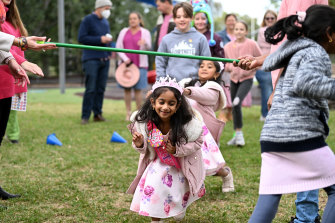 Tharnicaa Nadesalingam plays a game during her fifth birthday party in Biloela.Credit:Getty

The festive scene was a welcome contrast to last year, when little Tharni was forced to spend her birthday in Perth Children’s Hospital, where she was being treated for sepsis caused by untreated pneumonia.

She beamed alongside her parents Nades and Priya as she and her older sister Kopika, seven, were presented with a large cake decorated in pink and yellow.

“We had a lovely big slab cake that was for both girls because we missed four years of birthdays, for Kopika as well,” Ms Fredericks said.

“Then we had a beautiful pink cake that had a little koala on top as well. That was at Tharnica’s request.”

Ms Fredericks launched the online petition to bring the Tamil asylum seekers home four years ago after they were removed by Border Force officials in March 2018.

She said the family is overwhelmed with the outpouring of support.

“They’re just getting more and more relaxed each day,” she said.

“They were so overwhelmed with all the love and support over this weekend. They’ve seen it all in one place and so I think that’s been incredibly overwhelming that they just feel so incredibly grateful.”

Strangers have been cheering “welcome home” and hugging them after their four-year nightmare came to an end.

“You can just see we’ve touched every corner of the community,” Ms Fredericks said.

Refugee organisation People Just Like Us is now calling for all refugees and asylum seekers on bridging visas to be given permanent protection.

“It is a story that resonates with warm Australians on a deep human, almost mythical, level. We feel proud to be generous and compassionate,” said Fabia Claridge, the organisation’s co-convener.

Priya and Nades arrived by boat in Australia as asylum seekers fleeing the civil war in Sri Lanka, before they met and had their two girls.

In March 2018, the federal government attempted to deport them before an 11th-hour court injunction saw the four held at the Christmas Island detention centre for two years.

They were then moved to community detention in Perth before the newly minted Labor government intervened when they came into power last month and gave them bridging visas.

The family are seeking permanent residency, with Prime Minister Anthony Albanese seeing “no impediment” to it being granted.

Cut through the noise of federal politics with news, views and expert analysis from Jacqueline Maley. Subscribers can sign up to our weekly Inside Politics newsletter here.