Through the good times, the bad times and even the controversial times, Nathan Cleary and Tyrone May have had each other's backs.

This time last year the pair escaped Australia to try and forget about what was an emotionally draining season for very different reasons. 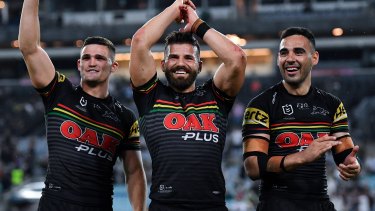 This time last year, May and Cleary were in Texas at a place called UnBARlievable, an Austin pub that features an indoor slippery slide.

Cleary was under fire for his form in what was an ordinary 2019 campaign. Some questioned whether he deserved to keep his NSW Origin jersey.

May was embroiled in the club's pre-season sex tapes scandal and had barely avoided jail time when he pleaded guilty to filming two videos without the consent of the women involved.

May was then inadvertently dragged into Cleary's Anzac Day TikTok incident this year, which earned him a further two-match ban on top of the five-game suspension he was already serving for the sex tapes scandal.

"I kind of dragged him into it this year. That was my fault," Cleary said of the breach of the NRL's biosecurity measures. "Both of us definitely regret what has happened and wished it never happened.

"It's given us a lot of lessons to learn and we're lucky it's happened at a young age where we can try and move on from it and try to get better, not just as footballers but as people.

"That's been the main focus for us. It's something that's been instilled amongst the whole group, which is being good people."

Cleary maintains the TikTok saga "went against my values and the team's values".

"Coming into this year, I wanted a big year,'' he said. "The pre-season we were a part of, there was a good feeling. There was belief in the group we would have a good year when not many people thought we would.

"I totally regret what I did [on Anzac Day]. It felt like it wasn't what I was about and it went against my values and the team's values.

"A lot of people were let down and it was embarrassing for me and the group.

"All I wanted to do was repay my teammates and the club for supporting me – I wanted to repay them with my football.

"A lot of people reached out. It's easy to look down on someone when they make a mistake. I was grateful for the people who stuck by me.

"Even last year I wasn't playing the football I wanted to, but you remember the people who have your back and are in your corner."

They might be best mates now, but May could not stand the young halfback when he first arrived at the club.

"I was a halfback, I knew he was the coach's son, so I told a few of the boys not to talk to him," May said. "But once I got to know him, he's not just a special player but a guy I've got closer with each year. He's now my best mate on and off the field.

"Last year was a big one for him. He copped a lot of criticism. Then to come out the other side of the [TikTok drama], he's proven a lot of people wrong.

May moved into Cleary's home when the game shut down in March due to COVID-19. He said the Anzac Day saga was a "punch in the face" after his well-documented "wake-up call" last year.

Except for coach Ivan Cleary, few would know Nathan better than the 24-year-old May, who looked like he had been playing with the halfback his entire life when promoted to the Panthers' starting side last week. 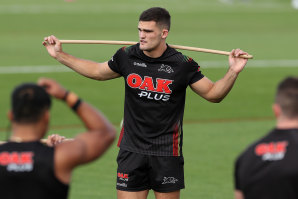 "But I still can't tell when he's nervous," May said. "He's told me he is sometimes, but I can never tell. He acts so cool. We'll need his level head this weekend."

Cleary has a healthy respect for May and describes him as "an out and out footballer".

"I'm proud of him and happy for him; he's back doing what he loves," May said. "Now he gets to do it on the biggest stage. He's a knockabout bloke. There is a lot more to him than meets the eye.

"He can be a smartarse around training, but he's good to have around. On the field he's an out and out footballer, he puts himself in the right place at the right time and makes everything look so easy."

Ex-President of Barca Laporta will take part in the new elections
Antonio Cabrini: Maradona would still be alive if he played for Juventus. The love of Naples was strong but unhealthy
Ferguson on Rashford's charity: Fiction for a young man. He should give me some advice
A Preston player who twice touched an opponent's genitals was disqualified for 3 matches for aggressive behavior
Atalanta Director: everything is fine with Miranchuk, there are no symptoms of coronavirus
Kovid mocks the Latvian championship: the team got only 8 people (but still did not finish the match)
Gerard Pique: We all hope that Messi will stay at Barca
Source https://www.smh.com.au/sport/nrl/bond-of-brothers-cleary-and-may-ride-rocky-road-all-the-way-to-decider-20201024-p5686g.html?ref=rss&utm_medium=rss&utm_source=rss_feed

From fat-shaming to spelling backwards: The secrets of AFL recruiting

‘I AM NOT GOING TO STOP’: Mum’s disgust at email to sick son

From Bali to buying: the great mortgage misconception

Legends face off ahead of blockbuster

STAY AWAY: Island closed to new visitors as fire rages

The ‘unsuitable’ people being given gun licences

How ‘abnormally’ hot it’s going to get today

When a publisher's staff become book burners, culture itself is cancelled