The famous Noah’s Backpacker hostel, with views stretching across Bondi Beach, has been snapped up by pub baron Jon Adgemis’s Public Hospitality Group for $68 million, becoming the latest addition to his group’s expanding portfolio.

Noah’s was listed in April with a price tag of about $70 million and is considered one of a few prominent development sites along the prime Sydney waterfront strips.

Sitting on a 1087 square metre at 2-12 Campbell Parade, the 260-bed hostel comes with retail outlets and offers the new owners the opportunity to redevelop it into an upmarket boutique hotel. 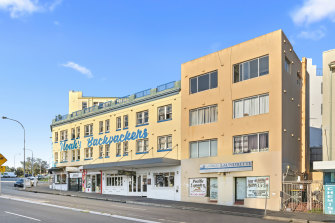 The Noah’s Backpackers site at 2-12 Campbell Parade, Bondi Beach, Sydney has been sold for $68 million.

Adgemis was the former head of the KPMG mergers and acquisitions sector but has turned his attention to the pub sector through PHG, owning and operating the Lady Hampshire in Camperdown; Strand Hotel in Darlinghurst; Empire Hotel in Darlinghurst and The Town Hall in Balmain.

Adgemis said Noah’s provided a great opportunity for PHG to develop the site into an iconic destination for a hotel with spectacular views.

Peter Crinis, the manager of PHG, said the group was excited by the purchase but has a responsibility to create a “unique and stylish boutique hotel that is as iconic as the area”.

“We will initially upgrade the existing business and will take our time developing the asset into a lifestyle boutique hotel that will fit in with such a beautiful location,” Crinis said.

Noah’s came into prominence in 2020 and again last year when it was hard hit by the global pandemic and many positive COVID-19 cases forced its closure. It re-opened after deep cleaning and still operates as a busy backpacker with the re-opening of international borders.

The previous private family owners paid about $5.6 million for the two main buildings in 1997 and a further $8.5 million for the adjoining apartment block two years ago.

Agents advising on the sale, being the Colliers team of Miron Solomons, Matt Pontey and Henry Burke, with Oxford Agency’s Daniel Marano and Ralph Garofano, said the family decided to test the market in April after fielding a number of unsolicited offers.

The deal comes as the pub and accommodation sector is riding high with sales upwards of $1.5 billion in the past year and likely to rise more before the end of June.

Another property predicted to fetch a high price is the landmark Links House Hotel in the NSW Southern Highlands, which has seen a rise in demand from the strong tourism market.

CBRE Hotels has been appointed to sell the freehold property which was constructed in 1928, and comes with 17 guest rooms, the fine dining Ethos restaurant and extensive event facilities.

The Southern Highlands region has been a major beneficiary of the New South Wales tourism drive market renaissance, with visitation to the area increasing by more than 50 per cent since 2014, according to CBRE research.

In Victoria’s wine district of Yarra Valley, the Chateau Yering is being listed for sale offering 32 rooms and sitting on 250 acres. Agents HTL Property and Burgess Rawson are expecting a range of domestic and international investors to run the ruler over the venue.