London: People who break coronavirus rules will be fined up to £10,000 ($17,700) from next week after Boris Johnson's most senior scientific advisers warned him that the public's failure to follow lockdown rules was allowing the pandemic to spiral out of control again.

As deaths and infections continued to mount this weekend, Professor Chris Whitty, England's Chief Medical Officer, and Sir Patrick Vallance, the Chief Scientific Adviser, told the Prime Minister that compliance with the rules was among the worst in Europe. 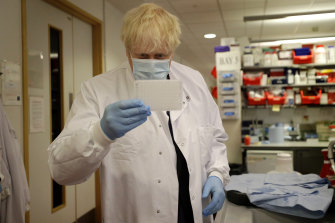 The new fines – starting at £1000 for a breach and rising sharply to £10,000 for repeat offenders – apply to anyone who fails to self-isolate after being contacted by the NHS's Test and Trace teams from Monday next week.

Police will be ordered out on patrol in areas with the highest infections to check people who have been ordered to isolate are complying with the new laws, with neighbours also asked to report their suspicions.

The Prime Minister spent Saturday considering proposals to stop a second wave of the virus, with government sources warning that Britain's death toll would be in the hundreds within weeks. An announcement could come as early as Tuesday.

Options under discussion are believed to range from a three-week national shutdown of pubs, bars and restaurants, to a traffic light system to manage multiple local lockdowns.

Johnson is also considering raising the £100 fines for breaking the "rule of six" – which outlaw groups of seven or more – to as much as £1000 for a first offence, after alarming internal Downing Street figures showed widespread flouting of the rules.

Johnson said: "The best way we can fight this virus is by everyone following the rules and self-isolating if they're at risk of passing on coronavirus.

"And so nobody underestimates just how important this is, new regulations will mean you are legally obliged to do so if you have the virus or have been asked to do so by NHS Test and Trace.

"People who choose to ignore the rules will face significant fines. We need to do all we can to control the spread of this virus, to prevent the most vulnerable people from becoming infected, and to protect the NHS and save lives."

The news came as newly confirmed daily cases of coronavirus hit 4422 – topping 4000 for two consecutive days for the first time since early May – while another 27 people died. Cases of the virus and hospital admissions for COVID-19 are doubling every seven to eight days in the UK.

Business owners who threaten self-isolating staff with redundancy if they do not come to work will also be fined, sending a clear message that this will not be tolerated.

Ahead of Johnson's decision, one faction of the cabinet is urging the him to avoid another national lockdown, by splitting the country into three tiers of coronavirus risk zones.

Under the plans, agreed by his coronavirus committee on Friday night and now with the Prime Minister, some areas would be put into more draconian measures, with others maintaining current levels of freedom. One supporter of the "traffic light" system said: "A three-tier approach gives greater clarity and consistency. At the moment there is a range of different measures being applied in different places and that lacks clarity."

However, a senior No.10 source said such a system could encourage people to visit other areas and increase the spread of the virus from region to region unless road blocks were enforced.

The source said: "If you locked down London would you get a situation where everyone flooded out to the Home Counties? Do you end up spreading the virus? We have a local lockdown strategy that has been very effective. That is going to continue. The question is now what further national measures do we take?"

Some senior ministers are pushing for tighter "Ireland-style" national measures that could last three weeks. In Dublin, social and family gatherings were banned indoors, restaurants were banned from allowing people to dine indoors and travel restrictions in and out of the city were imposed, except for work and essential journeys.

Johnson hardened his approach after Professor Whitty and Sir Patrick said Germany and Sweden had managed to stop surging infections as compliance was higher than in the UK.

A senior source said: "Chris and Patrick made the point this week to the PM that one of the reasons that Germany and Sweden are faring relatively well at Covid was because of the public's general compliance. They raised their concerns and one of the ways to bring that up is additional enforcement."

On Saturday, the British Medical Association warned that the NHS would "once again be crippled" unless the government introduced stronger coronavirus measures.

Josep Bartomeu: it was Important to start a new era for Barca with Messi. The Interests of the club are above all
Spider-man is a Barcelona fan. Tom Holland photographed in a Catalan t-shirt
Neymar made the world team of 5 players. There is no goalkeeper in it
Zidane on Barca's reaction after Classico: Real Madrid are focused on their goals. I don't mind talking
Pep on winning the Champions League: I will try. I have already answered this question 250 times
Klopp on 2:7 from Villa: the Players reacted as I expected. They struggled and won two games
Diego Maradona: Ronaldo and Messi are ahead of the rest. No one can do half of what they do
Source https://www.smh.com.au/world/europe/boris-johnson-introduces-18-000-fines-for-covid-rule-breakers-20200920-p55xdi.html?ref=rss&utm_medium=rss&utm_source=rss_feed