Opposition frontbencher Chris Bowen says Labor must do better to embrace the aspirations of suburban Australians if it has any chance of returning to government following three successive federal election losses.

Mr Bowen, viewed among colleagues as a future leadership candidate, will tell his party's faithful in NSW on Saturday that as the federal opposition grapples with an identity crisis, it must not think it faces a choice between appealing to inner-city voters or those in regional Australia. 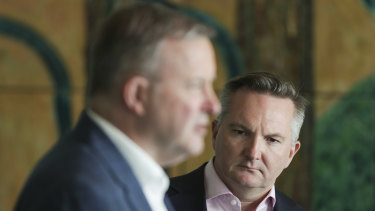 Chris Bowen (right), with Labor leader Anthony Albanese, says he is frustrated at the debate over the future policy direction of the party.Credit:Alex Ellinghausen

The federal caucus has been bitterly divided over the question of climate targets during the past 12 months. Veteran frontbencher Joel Fitzgibbon quit his resources portfolio earlier this month, warning the party would further alienate its blue-collar working base if it pushed for deeper cuts in carbon emissions.

Mr Bowen, a member of the influential NSW Right faction and former shadow treasurer to Bill Shorten, said he was frustrated at the debate over the future policy direction of the party.

"We could win every inner-city seat and every conceivable vote from possible voters in the regions and still fall far short of government if we are not winning the support of the millions of voters in the suburbs. If we are not in touch with their aspirations, we will still fall short."

Mr Bowen will highlight a declining manufacturing sector, congested transport routes, growing insecure work and a lack of government planning as some of the biggest challenges for families.

He will warn against the increased concentration of jobs in central business districts, coupled with a lack of new infrastructure, claiming suburban Australians face worsening physical and mental health because they are spending longer in their cars and on trains, and less time with their families and communities.

Mr Bowen will say Labor needs to remind voters "we are from the suburbs – from them and for them" and a future Labor government must protect the "rich diversity of backgrounds, faiths and vocations that the suburbs hold".

The review into the ALP's 2019 federal election loss identified that economically insecure, low-income voters in outer-urban and regional Australia moved against Labor while tertiary-educated, higher-income Australians swung strongly towards the party. Labor needed to reconnect with people of faith on social justice issues and emphasise its historic links with mainstream churches, it found.

Mr Bowen suffered a 7.36 per cent swing against him on his primary vote in his western Sydney electorate of McMahon.

According to a draft version of his address, Mr Bowen will say the message his party should take from the United States presidential election is that Joe Biden's victory was built in suburban America, and Labor's path to government will "also surely be through the suburbs".

"Despite the fact that we are one of the most urbanised countries in the world, with 90 per cent of the population living in urban areas, I think that suburban issues often get overlooked in the policy debate," Mr Bowen will say. "It is just assumed that they will 'keep on keeping on'."

"We [need to show we] understand that living in the suburbs is a choice – not just a stepping stone to somewhere else – and that Labor supports that choice with policies for better lives and livelihoods in the suburbs."

Mr Fitzgibbon's departure from the frontbench, compounded with the growing frustrations of some within the party, has sparked questions over the future of Labor leader Anthony Albanese after just 18 months in the role.

The leadership rumbles also noted the destabilising impact of the sudden departure of one of Mr Albanese's most senior advisers, deputy chief of staff Sabina Husic, who resigned after an anonymous "malicious" attack against her was posted online the day she returned from three weeks of mental health leave.

Mr Albanese's chief of staff, Tim Gartell, had a month earlier read the riot act to staff, telling them they needed to be more collaborative and less "cliquey" if the ALP was to be competitive at the next election.

Bayern won the 1st round of the Bundesliga. The gap from Dortmund - 10 points, from Leipzig-4
Bayern's negotiations with Musiala are at an impasse. Manchester United, Liverpool and Man City are monitoring the situation
Now you can just leave the players behind the offside line? This is a farce. Aston Villa coach Smith on the refereeing of the match with City
Pep about 2-0 with Aston Villa: Man City played well against a top team. Just look at the results!
Lukas Podolski: He could definitely have turned into a Locomotive. I met with the president of the club, it was a woman
Allardyce blabbed and told about the illegal transfer condition: West Brom took Snodgrass with the condition not to play against West Ham
Juve director: Ronaldo's charisma and character help us. We believe in Pirlo, there are no specific expectations
Source https://www.theage.com.au/politics/federal/bowen-tells-labor-faithful-the-path-back-to-government-is-through-the-suburbs-20201127-p56imn.html?ref=rss&utm_medium=rss&utm_source=rss_feed

Trust, confidence, stability: the meaning of the colours on Inauguration Day

'Like a war zone': Britain suffers deadliest day of pandemic

Pope tells Biden he prays God will guide reconciliation in US

'I would run for days and days': Why is artist Shaun Gladwell running?

Tense scenes on the streets of Washington

Biden’s plea to US: ‘End this uncivil war’

'This is democracy's day': Biden sworn in as US President

‘Europe Has a Friend in the White House,’ Says European Commission President

Joe Biden Sworn in as 46th President of the United States

‘We’ll See Each Other Again,’ Says Trump as He Leaves White House

Half of senior students without proficient civics and citizenship knowledge

The $2.16m vote on how to handle Coast’s growth

'We'll be back': Trump leaves White House ahead of Biden inauguration

Captaincy too big an ask for Cummins, says Taylor

Australia Day: The economic case for changing the date

Cities, the magnets of civilisation, have lost their pulling power

Raunch aside, five lessons about romance to take from Bridgerton

Your Daily Horoscope for Thursday, January 21

To make your new health habit easier, use these friction-busting ideas

From the Archives, 1991: 'Biggles' fly-past backfires on Gower

'My good intentions have been misconstrued': Djokovic pens letter to Australia

Please, bear with us and what we have endured

Billionaire seen after months of rumours

'Like a time bomb going to explode': Premonition of Gold Coast mum-to-be's murderer