Kieran Foran will have to take up to a 75 per cent pay cut if he wants to remain at the Bulldogs next year, with the club tabling the veteran playmaker a one-year extension to stay at Belmore.

Foran has been weighing up the offer since before DEan Pay parted ways with the Bulldogs on Monday night, reluctant to commit to the club without knowing who the coach would be. 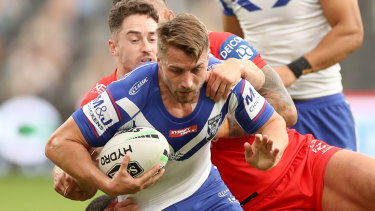 The Bulldogs have offered Kieran Foran a new one-year deal - but at a dramatically reduced salary.Credit:Getty Images

Sources close to discussions told the Herald that Bulldogs coach-in-waiting Trent Barrett has indicated he would like Foran at the club next year, but it will have to be for far less than his current deal of $1.2 million a season.

It's believed the one-year deal on offer is worth in between $300,000-$400,000, with Foran willing to bide his time and prove that his value is more than what the Bulldogs are willing to pay at the moment.

Speculation has been rife for months that Foran's old coach, Manly mentor Des Hasler, is keen to lure the Kiwi international back to the Northern Beaches to finish his career where it started in 2009.

Foran has been a strong performer for the Bulldogs when he has been on the field, however the club is concerned about his ability to back up each week given his history of injuries. It's why they've only offered the 30-year-old a deal for one more season. 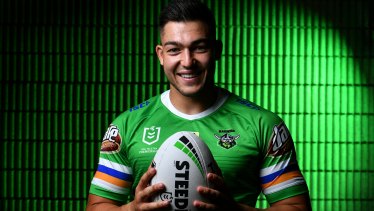 Foran hasn't played in excess of 20 games in a season since 2014, managing just 32 of a possible 57 games since he arrived at the Bulldogs on a lucrative three-year deal in 2018.

Meanwhile, Nick Cotric is still weighing up a three-year deal on offer from the Bulldogs, worth around $1.7 million, to join the club from next year as a centre. Cotric decided he wanted to focus on Thursday night's blockbuster grand final rematch before making a decision, but could make up his mind as early as Friday.

Canberra have offered him a five-year deal worth around $2.5 million, but the Raiders believe his future is on the wing, not in the centres where Cotric would like to play.

Uncertainty around the Bulldogs' coaching situation has stalled recruitment and retention talks in recent months, but the club is hopeful of finalising Barrett's deal as early as next week to provide clarity to those are waiting on answers.

Barrett and the Bulldogs are finalising the terms of a three-year deal, with the board expected to ratify the contract next week.

It comes as former coach Chris Anderson, the husband of chair Lynne Anderson, distanced himself from suggestions he was still meddling in football affairs despite his exit from an official role at the club.

"I'm happy to help the club in any way, but I'm certainly not a shadow over any coach's shoulder," Anderson told the Herald.

"I think that's disrespectful to the people who are making decisions; they are doing OK themselves. They've just been through a tough time and I think they have handled it pretty well. They gave Deano every opportunity to be the right bloke.

Spartak is going to withdraw from the RPL because of the refereeing – your reaction?
There are 2 cases of coronavirus in Atletico. The match with Leipzig – August 13
Renzo Ulivieri: Pirlo is one of the most profound thinkers of world football. He knows more than most coaches
Pirlo wants to sign Tonali at Juve. Alternative – Locatelli
Before the match with Real Madrid, sterling watched a video of the defeat by Tottenham in the 2018/19 Champions League
Andrea Pirlo: I am Flattered to have received such respect and trust from Juventus
Former Manchester United midfielder angel Gomez has moved to Lille. He will spend the season on loan in Boavista
Source https://www.smh.com.au/sport/nrl/bulldogs-offer-foran-one-year-deal-as-he-weighs-up-75-per-cent-pay-cut-20200716-p55cso.html?ref=rss&utm_medium=rss&utm_source=rss_feed