Here’s the thing about workplace bullying. It rarely happens in private. The signs are frequently obvious. There are bystanders. People who see what’s happening. People who do nothing.

This doesn’t mean they have to intervene. It’d be enough, perhaps, to approach the targeted colleague afterwards to make sure they’re OK and offer support. Or even bring the issue to the attention of someone with the authority to stop it. 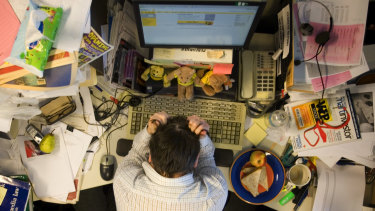 Workers notice when bullying happens at the office, but many don't try to stop it.

And yet that hardly happens. Witnesses remain witnesses, sometimes morphing into accomplices as they encourage the actions of the bully or, worse, actively join in.

In their attempt to understand why bystanders remain passive, a research team led by Murdoch University and Edith Cowan University has published the findings of a study that asked approximately 100 of these silent witnesses (and just as many victims) for an explanation.

The reasons (or should that be excuses?) varied. Some felt powerless, perceiving themselves ill-suited to confront a bully more senior than them. The following comment by one of the participants is reflective of their seemingly impossible situation: “We used to discuss it only at peer level. We did not take any action as the person was very close to top management.”

In many workplaces it was less a matter of power and more of fear. Colleagues were scared to intervene or report, often worried they’d be next. “I could not respond because I was a trainee and I was scared and humiliated too,” was the justification of an especially repentant respondent.

Others preferred a strategy of avoidance, opting instead to pretend the toxic behaviour wasn’t occurring. This was usually accompanied by self-doubt, with one bystander putting it this way: “I was unsure if others would view the incident as bullying.” The presence of uncertainty served as a get-out-of-jail-free card. An irresistible opportunity to escape involvement.

There were also those who were simply relieved, glad they were no longer the victim, grateful the bully had moved on to someone else, though that commonly led to regret as per this employee’s experience: “I just showed compassion to that person but should have taken some steps further and reported the whole situation to HR.”

Of most concern were the unconcerned colleagues who saw the bullying not as an isolated incident but as core to the organisation’s culture, rendering any effort futile. A case in point: “I sat quietly and said nothing because I knew that getting involved wouldn’t result in any change.”

Just as troubling were the troublesome colleagues who remained mute because they found it all rather amusing. Some light entertainment to ease a busy day. Thankfully they were rare.

The researchers’ primary conclusion is that bystanders are critical in reducing the prevalence of workplace bullying. This can be achieved by, first, teaching them how to identify it when it occurs and then, second, providing them with the various methods they can enact in response.

That knowledge, however, is insufficient. The various methods they’re taught are most effective when they have a sense of responsibility – an urgent sense of empowerment – to diffuse the toxicity they observe. That can only ever ensue when they feel it’s safe to do so.

Hence why, when informed about the presence of bullying at work, it’s essential employers always do something. Something constructive.

Messi scored in the 16th consecutive Champions League season and repeated Giggs' record
Bruno did not score a PSG penalty at the first attempt, but the referee asked for an Interruption due to Navas' exit from the goal line
Koeman is the fifth coach to manage 6 teams in the Champions League
Messi is playing his 17th season in the Champions League for Barcelona. This is a club record
Pirlo is the 3rd coach in the history of Juve to win a debut away match in the Champions League, after Capello and Lippi
Georginho Wijnaldum: Pickford went for an idiotic tackle. In matches with Everton, this often happens
Cech is included in Chelsea's Premier League bid. He ended his career as a player in the summer of 2019
Source https://www.theage.com.au/business/small-business/bullying-why-witnesses-do-nothing-20201001-p5611z.html?ref=rss&utm_medium=rss&utm_source=rss_business