Melbourne’s dogs could be getting eight new dog parks, but tensions are mounting over the location of the off-leash areas, with some owners saying the plans have not been properly thought through.

On Tuesday night City of Melbourne councillors will consider designating eight new off-leash areas for dogs, adding 3.5 hectares to the existing 16 hectares of off-leash parkland across the city – equating to nearly 10 MCGs worth of space. 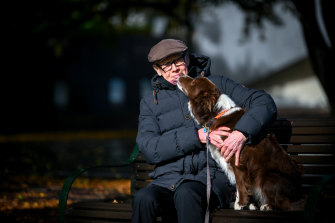 Leon Wiegard with his dog Allen in Carlton around the corner from a proposed dog park at Murchison Square.Credit:Eddie Jim

The recommendation followed a review of dogs in open spaces in 2019 which identified gaps in off-leash provisions across the city.

Melbourne’s dog population has continued to grow since the start of the pandemic, with registrations increasing more than 20 per cent in the past two years – from 3948 in 2020 to 4750 in 2022.

But some dog owners say many of the new parks are too small, fearing that their dogs could aggravate other park users or run into busy streets.

Dog owner Leon Wiegard is one of a group of residents worried about the impact of the proposed off-leash park at Murchison Square in Carlton.

“We’re concerned about the heritage aspect and the safety aspect of dogs off-leash in a small area,” said Wiegard, who was walking his border collie Allen in the park on Tuesday morning.

“It’s just inappropriate, it’s too small, it’s really the meeting place for all the neighbours ... you can’t have picnics or things with dogs all over the place.”

Wiegard said he was sympathetic to locals who wanted more dog parks and agreed the pets needed somewhere to roam free. But he argued Murchison Square was not a good location.

“The dogs will run out, there’s a bike way there and there’s a road on every corner,” he said. “It just doesn’t seem to have been thought through at all.” 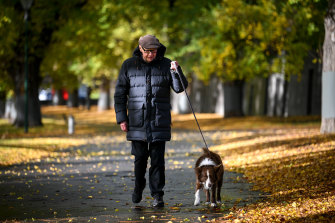 Leon Weigard is concerned about the heritage and safety implications of making Murchison Park an off-leash dog park. Credit:Eddie Jim

However, Brett Potts, who runs the Dogs of Melbourne CBD Facebook page, said off-leash parks were good for dogs, their guardians and the whole community.

In a petition to the City of Melbourne, Potts said dog parks promoted good canine physical health and socialisation and reduced nuisance behaviours.

He said the parks also discouraged delinquent and criminal activity by encouraging people to exercise and interact with each other, while also accommodating the needs of senior citizens the disabled and others who might have difficulties walk their dogs on leash.

“We see a need to up the ante when it comes to designated spaces for pooches large and small to run free – to exercise and socialise with their friends,” she said.

“Not only does this lead to a happier hound, but it also minimises the risk of behavioural issues like barking and destruction.”

A timed access model is proposed for Murchison Square, Point Park, Riverside Park and Wellington Park with off-leash hours only between 8pm and 6am daily.

Eades Park in West Melbourne will be fully fenced to accommodate the dogs but no changes are proposed to fencing on other parks.