A driver almost five times over the alcohol limit ran a red light, crashed into a car and careered into a service station, taking out a fuel bowser.

Security camera footage from the service station, released by police, shows the car going airborne before it smashes through the bowser. All motorists involved suffered only minor injuries. 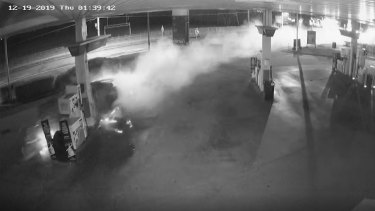 A still-image from the service station CCTV footage as the car destroys the fuel bowser.Credit:Queensland Police Service

The 32-year-old man who was driving the car was last week sentenced in the Beenleigh Magistrates Court to six months' jail, suspended for two years.

He was also disqualified for driving for a year.

After ploughing through the petrol bowser, about 1.45am on December 19 last year on Paradise Road in the Logan suburb of Slacks Creek, he returned a roadside breath test of 0.225.

He later pleaded guilty to dangerous operation of a motor vehicle whilst adversely affected by an intoxicated substance and driving whilst unlicensed.

Acting Sergeant Emma Wardlaw, the responding police officer on the night, said it was unbelievable no one was seriously injured or killed.

"We've arrived on the scene, we've observed a vehicle has significant damage to the front and there is debris all over the road," she said.

"If that service station was open [at the time] that petrol could have ignited, caused massive carnage and serious injury to that driver, the innocent driver of that other vehicle and any other parties at the service station or nearby. 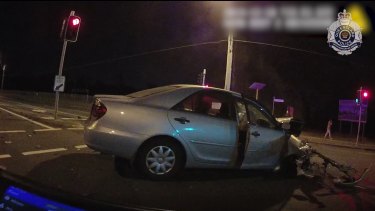 The innocent driver's car was a wreck after the impact in the middle of the intersection.Credit:Queensland Police Service

"I’ve seen many drink drivers involved in traffic crashes and sadly, quite often it is innocent motorists who have suffered as a result.

"The consequences of drink driving can be catastrophic and it is by sheer luck no one was seriously injured or killed as a result of this crash."

Koeman Pro 3:0 with Celta: Proud of the team. The results show that we are on the right track
Milan extended their unbeaten streak to 18 games by beating Rio Ave on penalties in the Europa League qualifier
Arteta on Manchester City in the League Cup: Arsenal are not very lucky with the draw. This is another test
Klopp about losing to Arsenal and Liverpool in the country of dreams, you have to score. Last pass failed
Muller held the UEFA ceremony in the stable. There had Neuer, Kimmich and Evangeliski
Liverpool 4 seasons in a row, cannot get past the 5th round of the League Cup and 2012 wins the tournament
Leno - first Arsenal goalkeeper in 8 years not to miss at Anfield
Source https://www.theage.com.au/national/queensland/car-goes-airborne-before-smashing-fuel-bowser-driver-blows-0-225-breath-test-20200814-p55lra.html?ref=rss&utm_medium=rss&utm_source=rss_national