The forging of a certain intimacy between artist and audience, once so highly prized in the gig format, has become standard procedure in a live-music scene shaped by continuing venue restrictions.

With only a numbered few others in a room, artists really are closer than ever. But at Mark Wilkinson’s show, select moments of true intimacy showed that carving out closeness – even with a small crowd – can’t be taken for granted. 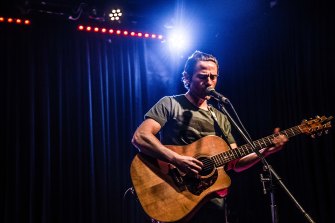 Without fanfare, the Sydney singer-songwriter strode onto the Vanguard’s moody, teeny tiny stage, an acoustic guitar slung over his shoulder. After eight months without having played a single gig, he was playing two in a night.

In a set that spanned little more than an hour, his rich, warm vocals filled the small space. With no accompaniment, minimal lighting changes and unfussy production, there was a simplicity to Wilkinson’s set that mirrored his sound: amorphous lyrics, strummed guitar and semi-folksy, David Gray-esque melodies with a consistent tempo were his natural terrain.

Love songs abounded, as did songs about the loss of said love. The uncomplicated Everything to Me set standard, devotional lyrics against clipped guitar chords. “Don’t be away for too long,” crooned Wilkinson in the bridge, “’Cause I fall apart when you’re gone/Here in my arms you belong.”

Latest single We’re Not Alone was a sweeping ballad whose message of “building a better world” was predicated on uncontroversial vagaries such as “if we stay together, we’ll overcome”. Benny’s on the Rooftop was more maudlin, and perhaps too bluntly framed lyrically to have the emotional import it was intended to.

It’s essentially rainy-day coffee-house music – which, with its crowd-pleasing lack of specificity, has a tendency to blend into itself.

That’s not to say there weren’t moments of sharpness. Middle Ground wove a story detailing the dissatisfaction and longing of trying to save a dying relationship. All I Ever Wanted rose to a faster, more urgent tempo, shining a light on Wilkinson’s deft guitar playing, which was otherwise relegated mostly to the background. Champagne was gritty and sensitively drawn, showing off the clarity of Wilkinson’s rich, honeyed voice.

For an encore, Wilkinson brought out the older, campfire singalong-style tune Hey Baby – and it delivered exactly the kind of easy escapism and nostalgia his crowd came out to find.

Shomurodov is close to moving from Rostov to Genoa for 8 million euros (Sport Italia)
Pobegalov about 12 cases of covid in Shinnik: I hope we can start training by October 4
Kulchiy is likely to become an acting coach of Dynamo. They want to keep Novikov in the club's system
Due to covid, the Premier League season may be considered prematurely completed if the 2/3 and 3/4 rounds are completed
Bayern could give Nübel a loan deal if Ulreich stays at the club
Former Italy striker Pazzini is Interested in Spezia. He is 36
Cherevchenko about Khimki: we will work both tactically and physically. Need to tighten up the team
Source https://www.smh.com.au/culture/music/carving-out-closeness-can-t-be-taken-for-granted-20200814-p55lub.html?ref=rss&utm_medium=rss&utm_source=rss_feed