Geelong are working on whether champion forward Gary Ablett could enter quarantine in Queensland before September 1 in order to give him the opportunity to play games before the Cats enter the finals.

At this stage the AFL has tentatively scheduled a flight on Saturday, September 1 that would take remaining players, as well as AFL officials and media partners, to their transition hub at Gold Coast's Mercure Hotel.

Richmond and St Kilda were planning for Shane Edwards and Dan Hannebery to be on that flight, however they would be open to getting the players into Queensland earlier if alternative options arose. 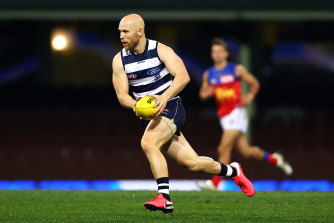 If the players could not leave earlier than September 1 they would not rejoin the team until September 15, just days before the season is scheduled to end on September 20.

Although they have been training in Victoria, the timeline would give them just one game before finals. A pre-finals bye might afford them the chance to at least play a scratch match with other members of the squad.

The advantage of large contingents travelling together is that they can stay in a secure hotel, which gives them the freedom to train within its confines and mix with other members of the travelling party.

If individuals are given exemptions to enter Queensland from Victoria they are required to quarantine in a hotel room for 14 days or they can be granted exemption under special circumstances to quarantine in a private residence that meets the government's quarantine requirements.

The state government copped backlash in July when entertainer Danni Minogue was allowed to quarantine at her home on the Gold Coast rather than stay in a hotel and it would be unlikely an AFL player would be granted special exemption.

However, there could be an alternative that would see a smaller group travel together and stay in suitable accommodation.

Geelong coach Chris Scott has been reluctant to be definitive about whether Ablett would return to Queensland out of respect for the champion's situation, saying on Thursday that nothing had been settled upon.

"It's an intensely private situation for Gary that he should talk about on his terms. I am not going to speak on his behalf. But nothing has changed our optimism that we will see him play again in the hoops before the end of the year," Scott said.

Meanwhile, the AFL has rebuffed Sydney's attempts to have families join their players in Cairns at the end of the season.

The league argued it was impractical for the families to rejoin players with so few days remaining in the season once they left quarantine.

Swans CEO Tom Harley argued strongly for the opportunity to be available given the club left the state at such short notice to head to Queensland before being sent to Perth, where families are not allowed to be part of the hubs. They believed that given it was an agreement with the players that chance should not be denied.

They have families of three officials already in Queensland but the other families will now be without partners until they fly back into Sydney at the end of the season.

"It's disappointing clearly because our primary focus as a club is to look after our people, so we wanted to make sure we explored all that ... We will now pivot to providing all the best bespoke to the families of players and staff that remain in Sydney," Harley said.

The AFL's decision on whether to schedule a pre-finals bye is yet to be made. A call on the timing and location of finals is not expected until the end of the month.

Lyon values Aouar over 40 million euros. Arsenal offered 35
Tottenham are not selling Mourinho's merch - because Chelsea still own the trademark rights. But it didn't stop Manchester United
Shomurodov is close to moving from Rostov to Genoa for 8 million euros (Sport Italia)
Pobegalov about 12 cases of covid in Shinnik: I hope we can start training by October 4
Kulchiy is likely to become an acting coach of Dynamo. They want to keep Novikov in the club's system
Due to covid, the Premier League season may be considered prematurely completed if the 2/3 and 3/4 rounds are completed
Bayern could give Nübel a loan deal if Ulreich stays at the club
Source https://www.smh.com.au/sport/afl/cats-exploring-quarantine-options-for-ablett-20200814-p55lq7.html?ref=rss&utm_medium=rss&utm_source=rss_feed