Channel Seven will continue to show AFL matches in the network's usual Thursday-to-Sunday slots and Fox Footy will cover the additional mid-week games during the last nine rounds of the season.

While the AFL, Seven, Fox Footy and production company NEP continue to work through the logistics around the constantly changing fixture, Seven managing director Lewis Martin said on Thursday his channel would continue with its usual broadcast slots despite the league looking to fit the final nine rounds into six weeks while Fox Footy had rights to games outside those slots.

The AFL is expected to schedule games most nights of the week as they look to push through the schedule while Victoria's 10 sides are temporarily based in Queensland.

"You will find the Seven component of games will be in the traditional time slots and where you have games outside that, they will be Fox games,” Martin said.

Seven will also continue with showing non-Victorian sides in their home markets when games are on Fox Footy.

Martin also said Seven would continue with its 'calling off tube' commentary system.

"It's our safest way to do things and it's proved to be a real positive that Brian and Bruce have been able to commentate seamlessly while Bruce is in a studio in Adelaide, Brian is in a studio in South Melbourne and the game is in a third location," Martin said.

"It's been a real plus for us in terms of managing locations and the limitations we have travelling in and out of locations.

"We have worked very closely with NEP. It's been an extraordinary logistical exercise of military proportions. We are getting broadcast personnel from all over the country and getting them into the right locations and supporting them to broadcast remotely."

AFL games have seen a noticeable rise in ratings which Martin said were up nine per cent nationally from this time last year and up almost 40 per cent in Queensland compared to this time last year on the strength of improved form from the Brisbane Lions and Gold Coast Suns.

For many years broadcasters have been able to lock in marquee games into the fixture but that has been diminished by the rolling schedule however Martin said broadcasters were just happy to have the AFL back. 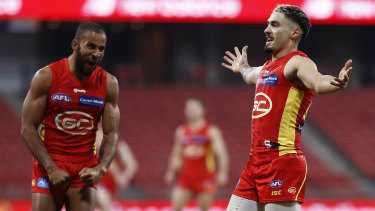 "It's transcending footy, it's transcending sport and we are just really pleased and appreciative that we have our footy back and the ratings are showing that," Martin said.

"The ratings are up enormously in the north and that's timely now Queensland will be the home of footy. I didn't think I would ever hear that, let alone say it, let alone be pleased to say it.

Coach Of Brentford: We went from a mid-level team to the third team of the season. This is an incredible achievement
Burnley are not going to sell Tarkowski for less than 50 million pounds
Lester wants to rent Trincou at Barca with the obligation of ransom for 50 million pounds
Scott Parker: Fulham have a lot to progress. And I am happy about it
Manchester United are threatening to pull out of negotiations for Sancho if Borussia do not reduce the price from 120 million euros
Cesc about Casillas: You are a mirror to look into
Lone mascots are another symbol of the year
Source https://www.smh.com.au/sport/afl/channel-seven-keeps-regular-afl-slots-midweek-for-fox-footy-in-condensed-fixture-20200716-p55csl.html?ref=rss&utm_medium=rss&utm_source=rss_feed