China has been successful in ramping up its influence in Victoria

The cognitive dissonance is head-spinning. Up in Canberra, our leaders are stressing over Beijing’s vindictive payback after they called for an international inquiry into COVID-19. Down in Melbourne, Premier Daniel Andrews is basking in his warm relationship with Beijing as they move towards consolidating their Belt and Road agreement. 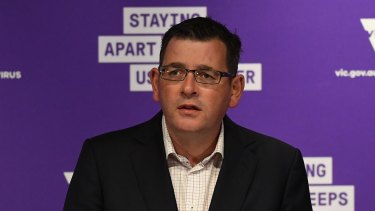 Has Daniel Andrews gone too far with China?Credit:JAMES ROSS

But for the strategists of the Chinese Communist Party there is no cognitive dissonance. The division is simply the desired outcome of a tactic known as “using the countryside to surround the city” or nongcun baowei chengshi. How does this work?

Since the scales fell from Canberra’s eyes and attitudes towards China began hardening – reflected in the ban on Huawei and the new foreign interference law – Beijing has been ramping up its influence activity in the state capitals. It’s been particularly successful in Perth and Darwin and, of course, Melbourne.

The going has been tougher in Sydney thanks to Sam Dastyari and Huang Xiangmo, the Chinese businessman now excluded from Australia on ASIO advice. The donations scandal now before the Independent Commission Against Corruption involving Huang and the Labor Party has made most politicians far more careful about whom they mix with.

We only need to notice where the loudest criticisms of the federal government’s China policy have come from to see the success of the tactic. Beijing’s megaphones in Perth have been widely noticed and, lately, Victorian Treasurer Tim Pallas has picked up his megaphone to tell Canberra that the fractured relationship is all Australia’s fault. We’ve been “vilifying” China.

Some Labor colleagues and union leaders are appalled, although perhaps in the minds of Andrews and Pallas the brickbats at home are more than made up for by the bouquets from Beijing.

I’m sure they are convinced that signing Victoria up to the Belt and Road Initiative and currying favour with Beijing is in the interests of the state because it will bring massive flows of investment.

For them, suggestions that the BRI is Xi Jinping’s grand plan to create a Chinese sphere of influence stretching across the globe makes little sense. The friendly Chinese officials they have been dealing with talk only about the investment boom that is Victoria’s to take.

Like many influential members of Australia’s elites, Andrews has over many years been carefully cultivated by the CCP using subtle psychological techniques so that they come to believe that anything that upsets Beijing is against Australia’s interests.

A politician committed to multiculturalism, Andrews has been diligent in mixing with a range of Chinese community organisations and befriending their leaders. Unfortunately, most of these organisations belong to the CCP’s United Front influence network.

He has also been guided in his China entanglement by senior staff members linked to the United Front network.

As opposition leader, Andrews’ senior adviser on China was Mike Yang, who has also been a vice president of the Australian Council for the Promotion of Peaceful Reunification of China, until recently the foremost CCP influence agency in Australia. It became notorious through its president Huang Xiangmo.

Today, Marty Mei is a senior adviser to Premier Andrews, and accompanies him on visits to China where the Premier is given the full treatment reserved for useful foreigners. Mei too has links with the United Front, including being named as a “special consultant” to the Shenzhen Association of Australia, known to be a front group.

In March, the Premier met with China’s Melbourne consul general, Long Zhou. It was an amicable meeting. The consulate reported that Andrews praised China’s tremendous efforts to prevent and control the epidemic and its important contribution to global public health and security.

The phrases are the same ones repeated over and over by Communist Party organs and Chinese diplomats. As Mareike Ohlberg and I explain in our forthcoming book, Daniel Andrews was engaging in biaotai, which in CCP lexicon means expressing allegiance to the Party by repeating its political phrases.

The result of a successful grooming process, often carried out over many years of contact with CCP officials and proxies, is a kind of cognitive reconfiguration so that the target comes to believe that he or she is acting in their nation’s interests.

As we begin to understand the way the CCP operates, it becomes apparent that the BRI agreement with Victoria is the golden fruit of a long process of cultivation of Melbourne’s political elite.

Daniel Andrews undoubtedly believes his BRI is in Australia’s interests. But when he negotiated the agreement, it was Boy Scouts up against Don Corleone.

Clive Hamilton is a professor at Charles Sturt University in Canberra and author of Silent Invasion about the growing influence of the Chinese Communist Party in Australia.

Liverpool made a request to lease Dembele. The Frenchman intends to stay in Barcelona (Di Marzio)
Lyon midfielder AUAR wants to move to Juventus. Liverpool, PSG and Manchester City are Interested in him
Bayer has extended the contract with defender Wendell until 2022
Wasserman became the new agent for Fede Valverde
Kurzawa took part in a protest against racism in Paris. 20 thousand people took to the streets
Pedro will leave Chelsea in the summer. Roma-the favorite in the fight for the player (Calciomercato.it)
Liverpool, Chelsea and Manchester United have 12 days to buy Werner for 55 million euros. Then the discounts will end
Source https://www.smh.com.au/national/victoria/china-has-been-successful-in-ramping-up-its-influence-in-victoria-20200522-p54vnp.html?ref=rss&utm_medium=rss&utm_source=rss_feed

Unemployment will be solved by ‘less restrictions’ not ‘more welfare’

As it happened: Australia in recession as GDP drops 0.3 per cent; Victoria records seven new COVID-19 cases as Australian death toll stands at 102

Dead man may be first Australian coronavirus fatality in Bali

Cox and Phillips inducted into Australian Football Hall of Fame

A tale of two Brisbane intersections: similar safety issues but only one is a priority

We’re now ‘expected to pay for someone else’s renovations’: Bolt

CA braces for a potential pay dispute with players

No lycra in sight: Why more women aren't cycling or walking

NRL's new pitch for stadium cash is so greedy it's offensive

'Dangerous': Around the world, police chokeholds are being scrutinised

Frustrations remain for Queensland pubs, despite early easing of restrictions

Coal miner investigated for pollution spill as it eyes expansion

China's trade with states blooms despite no BRI, as Uighurs denounce Victorian deal

Amaysim bulks up customer base with Ovo Mobile buy

Sick tactic to drum up fear and hate

'Not just words on a wall': The reason for Carrigan's rapid rise at Broncos

'Barrett clause' could save Dragons $300,000 if they sack McGregor

Building watchdog warns he will clamp down on 'shameful' developers

Class action reforms must ensure access to justice for the vulnerable

'First in a century': cyclone Nysarga bears down on India's financial capital Mumbai

Costa poised to cash in on form as patience pays off

After Arab Spring, social media is the battleground

JobKeeper revamp in the works as virus puts Australia in recession

Civil unrest ‘tends to favour Republicans’ at the ballot box

From 'snake oil' to COVID-19 killer? Supplement tested in bid to fight virus

I’ve driven Australia, this is my top 10

Calls for ‘racist’ radio hosts to be sacked

Myer board vulnerable to Lew after it loses protection of kingmaker

Myer board vulnerable to Lew after it loses kingmaker's protection

From Carlton to nowhere: How coronavirus rocked teen footballer's world

ASIC blasts ME Bank over 'conscious decision' to blindside customers