It will be the biggest single addition to south-east Queensland’s public transport system in a generation, but commuters remain in the dark about just how Cross River Rail will integrate with the rest of the train network.

Public transport advocate Robert Dow, from lobby group Rail Back on Track, said the Victorian government had been able to provide operational details for Melbourne’s Metro Tunnel project which, like Cross River Rail, was due to open in 2025. 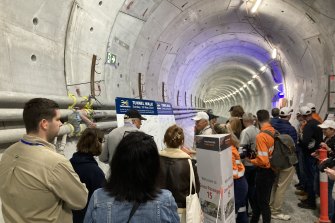 A select few got to walk through the Cross River Rail tunnels last week.Credit:Toby Crockford

Dow demanded the same level of transparency from the Queensland government as he called for the updated rail map to be released.

“It is not possible to build CRR without knowing how the network will operate,” he said.

“An overall network map and specific line details at the level that is available for the Melbourne project is required.

“It is not acceptable to continue to hide this information.”

Dow called on the Cross River Rail Delivery Authority to publish its operational network map as soon as possible.

“Why is it other jurisdictions are happy to make this information available as a way of showing the public what improvements and changes in their rail network they can expect?” he said.

“In Queensland, it is just construction videos, and vague bubbles of feel good statements to be taken on faith.

“We have been burned before with costly transport failures in SEQ. We don’t have faith anymore unless we know the real facts.

“Government and its agencies cannot be trusted on past form.”

Transport Minister Mark Bailey said commuters would know about the changes well in advance of Cross River Rail’s opening, but hinted the details were still being worked out.

“It’s three years, more than three years, until we actually open the Cross River Rail project, so there’s plenty of time yet,” he said.

“We are working very, very hard on the operational plan.”

But Bailey said there was “no doubt” there would be major changes to the current train line system.

“With a whole new rail line, we’ll need to adjust the system,” he said.

“... It will be released well within a lot of time, a lot of scope, before we open the system, so Robert will have a really happy day when we announce that, I know.”

Bailey said the government wanted to give commuters as much notice as possible so they could adjust their travel plans.

The $5.4 billion project includes a 10.2-kilometre stretch of rail track, 5.9 kilometres of it underground.

There will be four new underground stations and upgrades to eight existing train stations. Three new stations will be built on the Gold Coast to improve the intercity connection.